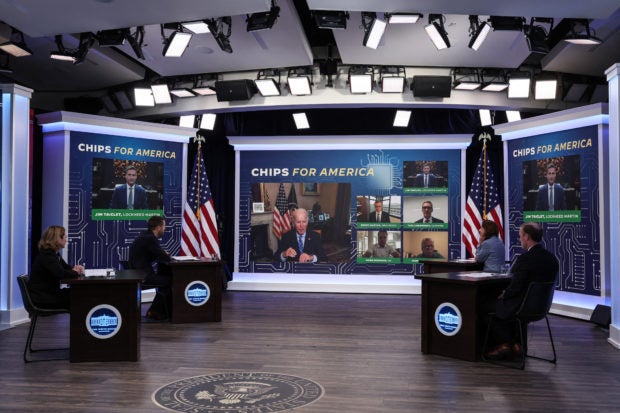 President Joe Biden on Monday pushed Congress to pass a bill providing domestic semiconductor manufacturers with $52 billion in subsidies to cut reliance on foreign sourcing for the vital component.

Speaking to senior economic and national security staff and representatives from manufacturers and a trade union, Biden said government backing for domestic producers means the United States will “be able to stay in the game.”

“Congress must pass this bill as soon as possible,” he said, citing both the economic and national security “imperative” of securing production of the tiny components needed for everything from smart phones to cars and weapons.

“America invented semiconductors, but over the years we let the manufacturing of those semiconductors go overseas,” Biden said. “The United States has to lead the world in production of these chips.”

Commerce Secretary Gina Raimondo called the microchips “a cornerstone technology that underpin our entire economy” and warned that the United States has already fallen far behind.

US importers are “utterly dependent on Taiwan for the leading edge chips,” she said, while China is already investing heavily in its state-sponsored semiconductor industry.

“It’s not possible to have a strong economy and a strong country if we don’t make things in America,” she said, also calling on Congress to get the spending bill “over the finish line and onto your (Biden’s) desk this week. It’s vital.”

While the microchips are at the heart of everyday technology, including in the booming electric vehicle industry, officials also stressed to Biden the national security implications of a weak supply chain.