The new Lipa City Hall marks an exciting new era for the city government of Lipa.

This first-class component city in Batangas will soon have a more modern, sustainable city hall that will not only provide the necessary public services, but would also stand as a visual legacy that Lipeños can be proud to call their own. 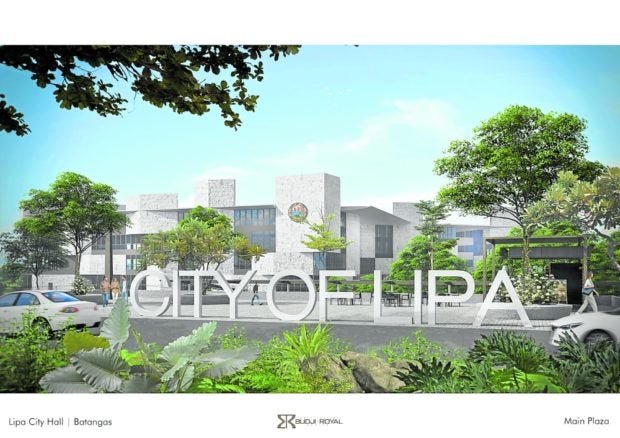 The new Lipa City Hall and Lipa Trading Center, which will rise within the up-and-coming 92-ha Areza, the newest mixed-use estate of Ayala Land.

At the same time, the City of Lipa will also have its own regional “bagsakan” terminal that would further bolster the province’s local agri-fishery sector, while helping ensure food self-sufficiency both within Batangas and the region.

Besides their significance for Lipa, both facilities are also seen to become valuable additions to Areza, making it well-positioned to become the new economic and lifestyle hub of the city. At the same time, the new Lipa City Hall and Lipa Trading Center will complement Ayala Land’s plans to create a new downtown in the city, integrating a diverse mix of uses that will soon provide opportunities for future locators and residents.

The new Lipa City Hall and Lipa Trading Center will complement Ayala Land’s plans to create a new downtown in the city.

The groundbreaking ceremony was a momentous occasion for Ayala Land as it marked a public-private partnership with the City of Lipa and the Department of Agriculture. ALI turned over 5 hectares to the city for the new Lipa City Hall and 2 hectares to the Department of Agriculture for the Batangas food terminal. This is the developer’s first mixed-use development in Batangas.

For every Ayala Land estate, it offers an opportunity to create a new regional center, allowing the company to design an environment that breathes with more open spaces; while connected by walkable streets, and sensitive to environmental sustainability and resiliency.

While Areza has the essential components of a signature ALI estate, it will be the only estate so far to become home to a city hall, which symbolizes the local seat of power. This will enable the city government to bring public services closer and more conveniently to the citizens of Lipa. 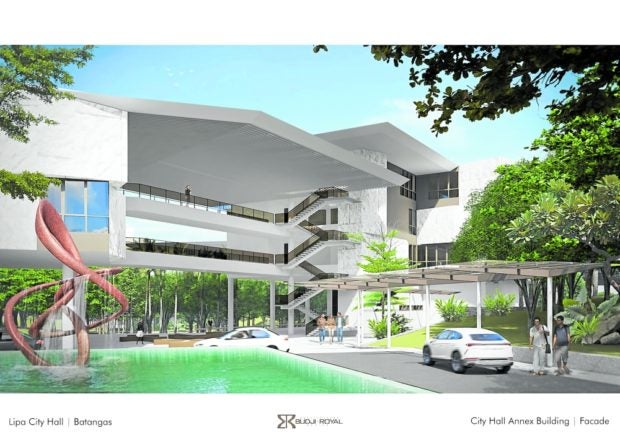 Areza is the only estate so far to become home to a city hall, which symbolizes the local seat of power.

ALI also extended its appreciation to have the Batangas food terminal in the area which is expected to spur trade and commerce, create business and job opportunities. More importantly, the facility is seen to streamline the regional food distribution network that would eventually result to lower costs and higher profits for farmers and better products on the dinner tables of the Filipinos.

In bringing Areza to life, Ayala Land will continue to adhere to long-held principles that have guided the design of every master-planned estate it develops—accessible, progressive and sustainable. The design of the Lipa City Hall, in particular, which is being spearheaded by renowned architectural firm Budji + Royal, dovetails with these same principles.

According to Ar. Royal Pineda, the city hall was designed to “bring back the land to the people”, providing ample open spaces through the trees and gardens that will surround the 5-ha property.

“The architecture will be very modern. But there will be nostalgia about Lipa—there will always be familiarity and a sense of pride. It’s never a borrowed image or borrowed architecture. Take note that architecture is the most tangible presentation of the town or the place so we want to make sure you can claim it,” Pineda said during the groundbreaking ceremony.

Pineda explained that the essence of the city hall’s architecture is permeability—spaces will be airy and naturally lighted, making it pandemic-ready. Textures were inspired by the nature in Batangas, while the landscape will integrate the existing trees that will be spread throughout the 5-ha expanse. The pedestrian-friendly area will also have an amphitheater in the middle, where people can congregate for bigger events, as well as a performance hall.

The city hall, which is targeted for completion by 2025, will comprise 72 blocks, which represent the 72 barangays in Lipa. These will be elevated to allow the public to walk under the buildings where there will be pocket gardens and parks. Lobbies will be grand, not enclosed, and will be visually connected to the landscape, while hallways will be wide and generous.

“Hopefully, the people who are working here will be more productive because they will be working in a beautiful setting,” Pineda said.

The DA’s 1.6-ha Lipa Trading Center will further Ayala Land’s goal of developing Areza as a strategically composed commercial hub in the south.

This P137 million trading center, which will serve as the regional food terminal or “bagsakan” of local food products and produce, will benefit farmers from Lipa and the rest of Calabarzon Region; traders, wholesalers and retailers; institutional buyers like restaurants, hotels and resorts;  and at least 21 organized farmers groups.

According to the DA, this center is expected to provide adequate facilities for farmers and ensure the accessibility, availability and quality of the agricultural livestock and fishery products; provide a trading post for the farmers to sell their harvested agricultural products at the right price; increase the production area from 1,669.71 ha to 2,549.24 hectares; and generate an additional income of P18.47 million for the City of Lipa on the project’s first year.

The Lipa Trading Center is expected to be fully operational by 2024.

Exciting times are indeed up ahead at Areza, an integrated community soon poised to become one of the most modern, progressive, dynamic economic centers in the South.