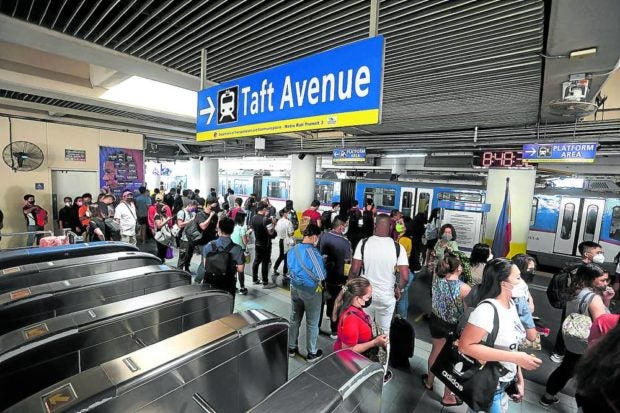 In this May file photo, commuters queue to take an MRT train at the North Avenue Station in Quezon City. It’s a scene reminiscent of prepandemic times showing long lines at the mass transit system, except commuters now also have to dodge a life-threatening virus in packed trains. —NIñO JESUS ORBETA

With the implementation of hybrid work, 25-year-old Mario San Juan (not his real name) makes sure he is able to go home before rush hour when traffic is much heavier and finding a ride is more challenging. At the train station, however, he still finds himself waiting in long lines with other commuters most likely following the same strategy he has in mind.

“When I work on-site, I make sure that I will be able to go home early. Otherwise, I might need to wait maybe around 10:00 p.m. for traffic to ease and then book a cab, which is more expensive than public transportation,” he tells the Inquirer.

It’s a familiar struggle that has become more of a nightmare now that more people are outside with return-to-office orders. Social media is abuzz again with photos and videos of people waiting in long lines at bus and train stations.

According to transport expert and urban planner Robert Siy, the true measure of a transportation program’s success is its positive impact on the lives of commuters who rely on public utility vehicles (PUVs) to navigate their way in traffic day after day.

Siy says the Duterte administration should have focused more on the commuting public’s welfare rather than the number of projects approved or implemented, which were mostly infrastructure.

“We have been in a transportation crisis for many years,” he tells the Inquirer.

This crisis has pushed most commuters to “aspire” owning private motor vehicles, which Siy says will only contribute to further road congestion and pollution. Car dealers were able to sell 268,488 units last year, up by 20 percent from 223,793 units in 2020, according to an industry report.

“Government should be tracking and reporting regularly outcome indicators like commuters’ travel time, queuing/waiting time, and travel cost so that its efforts are directed at improving those indicators,” he says.

According to a study by transport advocacy group AltMobilityPH, Metro Manila commuters spend 188 hours or 23.5 days stuck in traffic per year, costing the economy P26.79 million in lost productivity.

Siy still acknowledges the Duterte administration’s major investments to improve and expand the rail systems in the country, citing the North-South Commuter Railway (NSCR) and the Metro Manila Subway.

The NSCR system, which is designed to serve over a million passengers daily once fully operational in 2028, will have 35 stations spanning 28 local government units from Pampanga to Laguna.

Meanwhile, the 33-kilometer underground railway system, which will have 17 stations, connects Valenzuela City to Pasay City. It will start operations in 2027.

“These investments will help address the considerable shortage in safe and reliable public transportation,” he says.

The common station in North Edsa was slated for completion last month, but there have been no updates since. The 13,700-square meter common station is set to link the major railway systems, including LRT 1, MRT 3 and the Metro Manila Subway.

“We delivered to the Filipino people more projects, more trains, and more progress in reviving the Philippines’ railway network than any other administration in recent history,” Arthur Tugade, Duterte’s transport chief, had said in a press release.

Siy says the government should have started much earlier initiatives for active transport since many Filipinos do not own private cars. Ramping up investments for pedestrian and bicycle lanes will bode well for the majority, especially “the most vulnerable and disadvantaged.”

The DOTr had said it had established 563.57 km of bike lanes in big cities in the country, noting these have safety measures such as road signages, pavement markings and physical separators, among others.

But Siy says the new government can still “make walking and cycling safe and attractive travel options by investing in sidewalks and protected bike lanes and recognizing the priority of pedestrians and cyclists on all urban roads.”

AltmobilityPH, in its study, notes that an individual who uses a bike as his/her mode of transportation will be able to generate P281,461.92 savings per year. This is equivalent to purchasing over 6,100 kilograms of rice.

This computation was based on data gathered between September to December 2021. With fuel prices going through the roof these days, the group estimates savings could reach up to P300,000 annually.

Service contracting is also a welcome development as it helps sustain public transportation, Siy says. It also shows that the government recognizes the sector as an essential service, he adds.

Under this program, PUV operators are paid by the Land Transportation Franchising and Regulatory Board and the DOTr to transport passengers to predetermined locations and with specified schedules regardless of ridership.

“It needs to be sustained and expanded going forward. Because budget funds were limited, offering ‘libreng sakay’ was not a sound decision; it was not sustainable,” he says, citing the need to increase financial allocation from the government. The program has been extended until the end of the year, but conductors and drivers involved in the program are now complaining of delayed payments.

He also says the PUV Modernization Program is needed given that “many jeepneys and buses are old and heavily polluting; the fleet needed to be made safer, cleaner and more energy efficient.”

He says more resources could have been allocated to allow this program to flourish. This program, for one, was opposed by some public transport workers because it was costly for them to buy a modern vehicle.

Spiraling fuel prices is also among the immediate concerns of the Marcos administration. The transport crisis is further exacerbated with the exodus of several PUV drivers who can no longer afford expensive fuel.

Mody Floranda, national president of Pinagkaisang Samahan ng mga Tsuper at Operator Nationwide, tells the Inquirer that about 20 percent of the estimated 900,000 jeepney drivers in the country have left their jobs since they were not making enough. Some have resorted to working as a private family driver, vendor or carpenter, while others have gone back to farming in their home provinces.

Floranda earlier proposed to suspend excise tax on fuel to cut prices as this would encourage more drivers to get back on the road.

Move as One Coalition, another transport advocacy group, noted earlier that lack of PUVs on the roads meant commuters queuing for hours just to get a ride.

And to add to commuters’ woes, the government has ordered a return of in-person classes next month.

Mark Steven Pastor, Undersecretary for Road Transport and Infrastructure, had said the public transportation system could handle an expected 15-percent increase in the number of passengers.

About 27.56 million students and 876,000 teachers are expected to go back to school starting Aug. 22, according to the Department of Education.

Pastor says 80 to 90 percent of buses are once again plying the metro’s roads. The most recent rollback of fuel prices should also lure jeepney drivers to resume operations, he adds.

Earlier, Transportation Secretary Jaime Bautista said they were eyeing to implement a fleet rationalization scheme, which would allow the government to seek alternative or additional routes vis-a-vis the number of public vehicles on the road.

But to ease traffic, Siy suggests reducing the “demand for travel by promoting work from home or hybrid work arrangements.” INQ