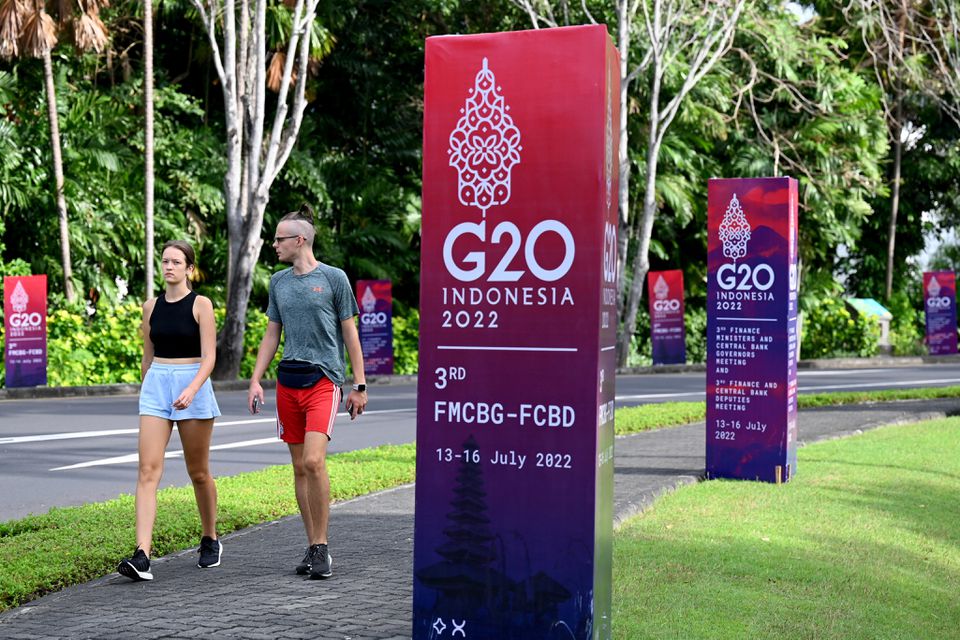 Foreign tourists walk past banners of the G20 summit near a venue for the G20 Finance Ministers Meeting in Nusa Dua on Indonesia’s resort island of Bali, on July 14, 2022. Sonny Tumbelaka/Pool via REUTERS

A two-day meeting of G20 finance ministers in Indonesia is expected to end Saturday without a joint communique, two officials said, after Russia’s war in Ukraine overshadowed proceedings.

During talks on the Indonesian resort island of Bali, finance chiefs from Western nations accused Russian technocrats of complicity in the invasion.

US Treasury Secretary Janet Yellen and Australian Treasurer Jim Chalmers on Friday blamed the invasion for sending a shockwave through the global economy.

In place of a formal communique will be a statement by Indonesia, which holds the G20 presidency, said one official who spoke on condition of anonymity.

Another source at the meeting said the host would summarize the talks in a declaration that would not fall under the G20 banner.

Indonesian officials did not respond to a request for comment.

At the beginning of the second day of talks, Indonesian central bank governor Perry Warjiyo called on ministers and global finance leaders to concentrate on recovery in a world economy still reeling from the Covid-19 pandemic.

“It is important that we remain focused on what we have planned to achieve this year, as this will also send a positive message to the global community on the G20’s role and efforts to support global recovery,” Warjiyo said.

But the talks have been under the shadow of the Ukraine war — which Russia calls a “special military operation” — after it roiled global markets, caused rising food prices and added to breakneck inflation.

It has left the forum unable to agree on a text with Russia disagreeing with Western nations over its invasion of Ukraine being the cause of the global economic headwinds.

“Russia tried to say that the world economic situation had nothing to do with the war,” a French delegation source told AFP on Friday.

He was in the room as Western officials expressed their condemnation, according to a source present at the talks.

Marchenko said the Russian invasion “clearly marks the end of the existing world order”, and called for “more severe targeted sanctions” against Moscow.