3D printers have now become more affordable, a local distributor said, a development which gives Filipinos more access to a technology that used to be out of reach.

Makerlab Electronics, a Filipino firm which has been selling 3D printers since 2016, shared that the market continues to grow, expanding beyond its initial reach in Metro Manila, and now all the way in Visayas and Mindanao. 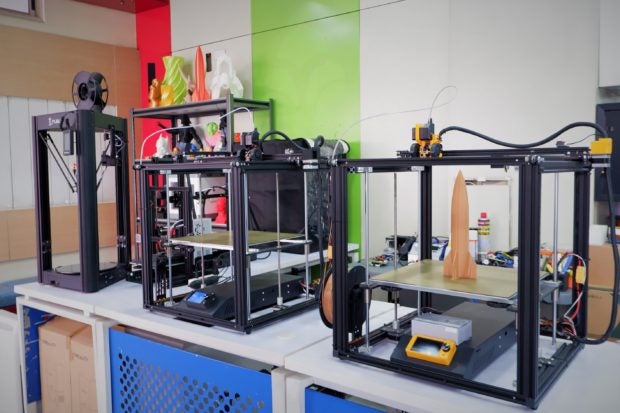 3D printing, or additive manufacturing, works by adding layers to form a tangible object based on a digital file. Different industries have pushed the limit of what 3D printing can do, from making one’s own memorabilia to as big as building a house.

“We can expect that more Filipinos will be made aware of 3D printing since 3D manufacturers now offer affordable 3D Printers that come with advanced features,” said company founder Mike Jassen Sy.

Just a few years back, 3D printers — which add multiple layers to create a tangible product based on a digital file — were not always this accessible to the public. The cost used to be too high making it not consumer-friendly, even when its price lowered considerably, since its commercial availability.

While the price eventually lowered further, it still remains quite expensive. Mike Jassen Sy, founder of Makerlab, recalled how entrepreneurs needed at least P200,000 in capital to start a 3D printing business.

Currently, interested buyers can buy a 3D printer from MakerLab at a cost of a little over P10,000 only, through Shopee, Lazada, or the company’s official website.  Makerlab offers affordable quality-made 3D printers, with parts imported directly from Shenzen, known as the “Silicon Valley of China.”

This ease of access, coupled with the growing wealth of free 3D printing tips online, has made the technology more accessible to Filipinos.

A 3D printer can “print” nearly anything from a digital file – from prototypes for larger business ideas to even houses and end-consumer products like cellphone cases. More importantly, it is also very easy to operate it.

“Since our products come from an open source, there are instructions all over the internet on how to operate the machine. The advantage is if you buy a product and you do not know how to operate it, the internet community is a rich resource that can easily help the user. In fact, there is even a 3D printer group on Facebook that helps 3D printer users by answering frequently asked questions,” added Sy.

3D printers — which basically create a tangible product based on a digital file — can make nearly anything based on a number of factors such as the size of the printer and the material used. Its application can be seen in nearly all industries that require innovation to thrive, from medical science and construction, to retail.

But while the technology brought about by 3D printers has been available for quite some time, it is still largely untapped in the country.  One of Makerlab’s objectives since its inception is to change the mindset that a 3D printer is now much more affordable. The company is also offering tutorials and offering educational materials to make 3D adoption easier.

In 2021, the Philippines ranked 51st out of 132 economies in the Global Innovation index, which aims to capture the multi-dimensional facets of innovation, which includes 3D printing. The index was published by the World Intellectual Property Organization and its institutional partners.

“We continue to strive our best to support future 3D printing enthusiasts through knowledge-sharing and service,” said Sy.