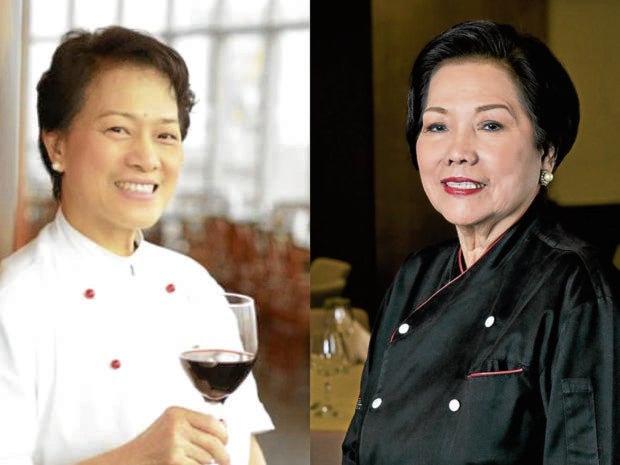 CHEFS WHO CAN’T DO WRONG Jessie Sincioco (left) and Glenda Barretto catered for the Presidential inauguration and took the opportunity to promote Filipino food. —CONTRIBUTED PHOTOS

There was a viral message going around that chef Jessie Sincioco catered the inaugural dinner of President Ferdinand “Bongbong or BBM” Marcos, Jr. at Malacañang last June 30. That is not accurate.

Chef Jessie did cater for the inauguration of BBM but she served the lunch buffet for the diplomatic corps at the National Museum, with pass around food served immediately after he had taken his oath of office and as His Excellency Archbishop Charles John Brown, Papal Nuncio and head of the diplomatic corps, raised a toast to the newly elected president.

Meanwhile, the inaugural ball at Malacañang was catered by the original “Queen of Filipino Fine Dining,” chef Glenda Barretto of Via Mare.

Here’s what was on the dinner menu: savory chicken soup with ginger, lemongrass and green papaya; prawn in roasted coconut cream or seared prime beef tenderloin with kaldereta sauce; and guava-basil sorbet with creamy soursop foam in chocolate sphere with almond crunch.

Truth be told, I have mixed feelings about these menus. I was initially perplexed at the simplicity of it all.

Imagine, for such a momentous occasion, diplomats were served pandesal and four other variations of stuffed bite-sized bread (empanaditas, sliders, mini buns and mini croissants). And then for dinner, the menu consisted of simply tinola and bistek kaldereta. And it was not even a four-course menu!

Not that these were not delicious. I have attended way too many chef Jessie and chef Glenda-catered events to be certain that these are delish. But look at the list. These must be the most humble inaugural menus ever!

Chef Jessie shared that the venue, and hence her menu, had limitations. The inauguration was held at the National Museum, so her team had to follow the strict protocols to ensure the protection of national art treasures. “I had to design the menu accordingly,” she recalls. “So we were limited to dishes that we can serve warm just using food warmers. There was absolutely no cooking inside! We had to do all our cooking at our commissary [in Makati].”

The inaugural lunch of the late President Benigno “Noynoy” Aquino was even more lavish. PNoy’s lunch buffet had a sushi and sashimi station, a spot teppanyaki grill station and tempura. The dinner had pritchon or fried suckling pig.

I really had to do a double take. Are you sure this is a Marcos menu? To be honest, I can’t believe it! Whoever was in charge certainly made sure that the menu would reek of prudence and austerity, not opulence!

Where were the Spanish tapas and Jamon Iberico for pass arounds? Where was the oyster? Where was the rib eye for dinner? The sea bass? Or the quintessential foie gras? All absent!

Yet the food received praises from the guests! So, on the other hand, it cannot be denied that lunch and dinner were certainly not only scrumptious but also served in style and in first-class fashion, given that the preparations had been made by the country’s two top chefs. Chef Jessie Sincioco had cooked for no less than Pope Francis and chef Glenda Barretto was the Malacañang Chef during the first Marcos administration and has been the country’s leading chef for 45 years! These two chefs can do no wrong and have proven that they can brilliantly make even the humble pandesal and the humble tinola fit for a king or in this case, a president.

While not the usual continental fine dining menu, I was really happy, even elated, to see our everyday fare elevated to a fine dining level to compliment the festivities of the day. And presented ever so elegantly! For love of country and Filipino food, I think they are doing this right and this should be done more often!

Another significant thing to note was the absence of pork. Chef Jessie shared that she had only one specific menu restriction: no pork! If this request was made in order to be sensitive to Muslims in the guest list, that is very much appreciated.

For future Malacañang events, now that it is evident that the new admin is willing to showcase Filipino food, even simple Pinoy fare, maybe they can explore the delicacies of other regions as well. These are not at all expensive and can offer variety even well within the “accessible yet elegant” theme. The various longganisas, dried fish, kakanins and other delicacies that vary from region to region would make for an exciting albeit modest menu.

Chef Glenda, Chef Jessie and other cooking queens like Beth Romualdez can certainly lead the way in making the journey of this new admin as delicious as possible, with signature Filipino flavors, even as it navigates through the storms of the world economy.

At least now we know that the new president likes tinola and bistek kaldereta! I don’t know what wines they served to pair these with but clearly, these went well with music by Cecile Licad and the Philharmonic Orchestra!