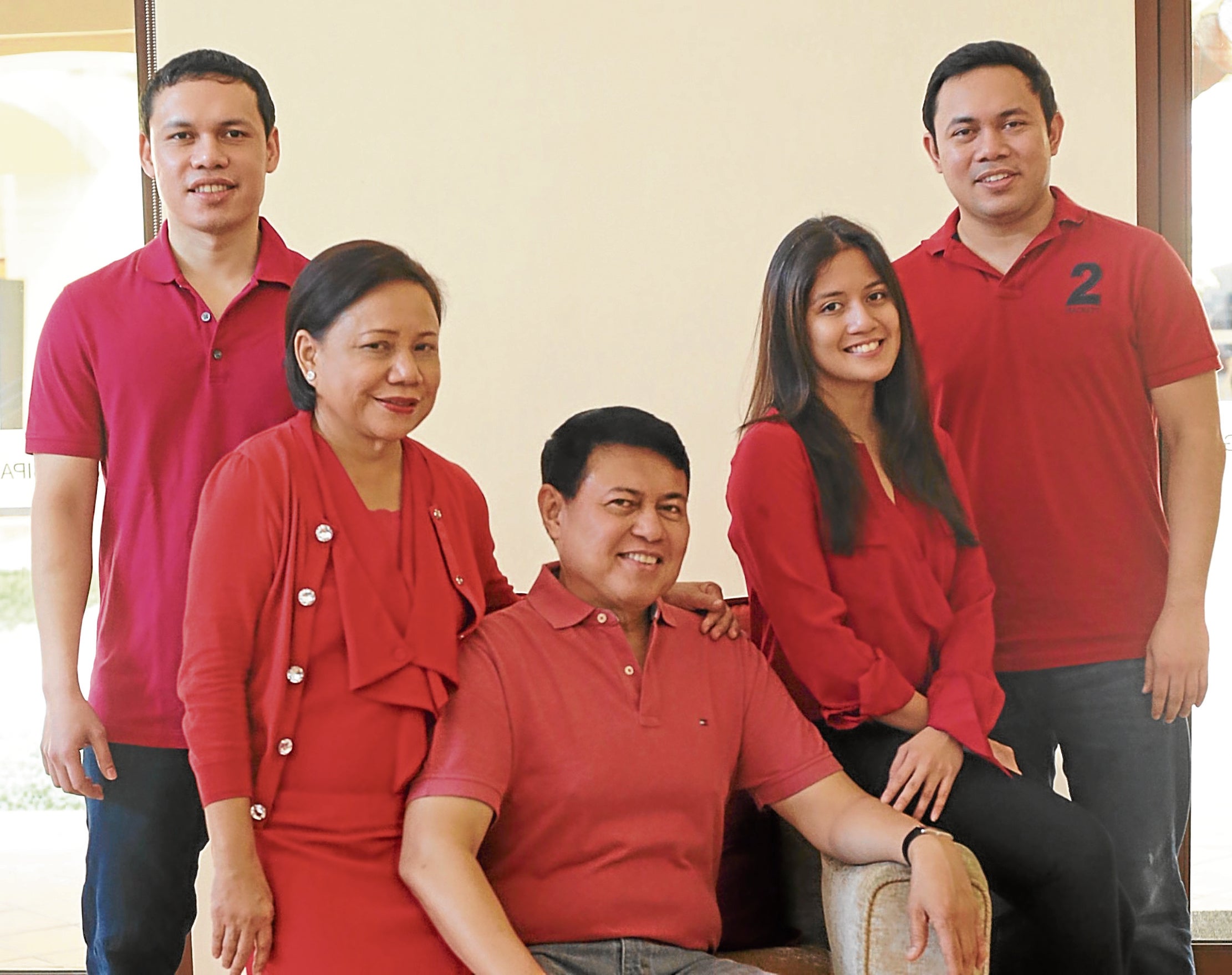 Billionaire Manuel “Manny” Villar Jr. spent a lifetime establishing one of the country’s largest personal fortunes as well as one of its most powerful political dynasties.

For Father’s Day, the richest dad in the Philippines pays tribute to his children while advising budding entrepreneurs that work and family time need not be at odds with each other. In fact, he believes combining the two is the path to success and fulfillment.

“Work is one proof of your love of family, and family makes the sacrifices we make at work all worthwhile,” Villar tells the Inquirer in an email interview.

“Even when I was very busy with work, I make sure that we all gather for Sunday lunch. That is a tradition in our family. No matter how busy things get in our individual lives, we sit down for Sunday lunch and catch up,” he says.

“I always tell young entrepreneurs that going into business is not about money but about passion and love. Do what you love. Do it for the people you love. Then you’ll never be miserable at work,” he adds.

Within the same family branch are politicians in influential national posts. His wife, Cynthia, and son, Mark, are Senators while daughter, Camille, is a member of the House of Representatives. Another son, Paolo, runs several of the Villar Group’s businesses with the help of competent nonfamily professionals.

Villar—also a former Senate president, House Speaker and presidential aspirant—beams with pride when he talks about his children.

“I am proud that my children—Paolo, Mark and Camille—all grew up as beautiful, successful and humble persons. I have never heard any complaints about any of them throwing their weight around or feeling entitled,” he says.

“More than any awards in business or politics, I consider that as one of my greatest achievements,” he adds.

Was there any push to shape their career? Villar says he offered his children the same counsel as any neophyte entrepreneur: do what you love.

“When Cynthia and I started our family, we wanted to create an environment where our kids would be loved and cared for and are able to achieve their full potential,” Villar says.

This is similar to his own management style.

“In business, you surround yourself with people who have the talent, passion and intelligence to be successful then you provide them with an environment where they could thrive,” he says.

“The sad thing about parenting is that your measure of success is when your kids do not need you anymore. You’ve created such a loving and encouraging life for them that they can be on their own.”

The question of succession often comes up for Villar, who turns 73 this year.

More recently, the tycoon has been taking more companies public as part of ordinary estate planning.

The group recently raised P4.8 billion from the downsized initial public offering (IPO) of real estate investment trust VistaREIT Inc. even as his more recent IPOs have been pummeled during the current market turmoil.

He also plans to list the power utility, Siquijor Island Power Corp. or Sipcor, on the Philippine Stock Exchange sometime in the third quarter of the year and his coffee business, which includes the eight-year-old Coffee Project chain.

“Our success is based on the hard work and perseverance of our executives and employees regardless of their family name,” he notes.

“While my children have taken leadership roles in the company, we have a lot of nonfamily executives who have helped the Villar Group become the successful company that it is now,” he adds.

Leadership will also play a critical role as the Villar Group embarks on a critical transition to become a leading township and vertical housing developer.

Villar has also said he would exit the socialized and mass housing segments to focus on other more profitable real estate ventures.

This includes a massive investment spree on 44 “estate” projects spanning over 1,400 hectares. These estates will be sprawling self-contained cities with residential condominium towers, malls, schools and office buildings.

Set to launch over the next year, the group’s estates will be located in cities across Mega Manila, Luzon, Visayas and Mindanao.

Villar is hoping to challenge established real estate hubs such as Makati and Bonifacio Global City given shifting preferences for the hybrid home and office work setup.

“It can’t all be Makati. Now, people want to work at home and inside coffee shops.”

From rags to riches

Despite his business success, Villar says it’s important to stay humble—a message he has passed on to his children.

“When you come from a poor family and become wealthy overcoming many obstacles through hard work and perseverance, you have a clear sense of what really are the important things in life,” he says.

The son of a government employee and a fish vendor, he helped his mother Curita sell fish and shrimps in Divisoria as a child. He studied Business Administration at the University of the Philippines (where he also eventually took his MBA) and worked as an auditor at SGV, earning enough capital to set up his own seafood delivery business in Makati City. After a big client defaulted, he renegotiated for debt restructuring so he could sell discounted meal tickets to office workers in exchange for receivables.

He later worked as a financial analyst for Private Development Corp. of the Philippines.

With a capital of P10,000 in 1975, the same year he got married to Cynthia, he bought two second-hand trucks to start a gravel-and-sand business in Las Piñas.

From there, he learned about homebuilding and set up Camella Homes in 1977. He entered middle-income housing through Crown Asia and luxury development with Brittany in 1992. Vista Land listed on the stock exchange in 2007.

After losing his presidential bid in 2010, he focused on growing his business empire.

But his real crown jewels can’t be measured by market capitalization.

“It is not the ostentatious display of wealth or living the life of luxury. It’s the people around you—family, friends, colleagues. I tell my kids that material possessions are fleeting. You may be rich now but a crisis or a mistake can easily wipe it all out. I know this by experience.”