Written by: By Vaughn Alviar

Of highland destinations in the Philippines, none has dislodged Baguio City as the top choice. And the reasons are aplenty.

When you drive up the winding roads of La Union, the chill and fog of Baguio embrace you. Those have been known of the city even before colonial times. For that reason, Americans decided in the early 20th century to transform what was then a village into a hill station, where soldiers and civil workers could rest and recuperate in a clime close to their country’s own.

The climate, usually some eight degrees lower than the lowlands, has been Baguio City’s main selling point ever since. In the tropics, especially during punishing dry seasons, many would do anything to escape to high places.

Baguio City has been welcoming tourists by the droves especially when the sweltering heat blankets the country­—thus earning its famous moniker as the “Summer Capital of the Philippines.”

It doesn’t simply bank on its natural gifts of cold and mist though. Baguio is also a modern city. It is the seat of government of the Cordillera Administrative Region. It is a haven for business and commerce, and a university town. Due to all these, people have gone to seek opportunities not only for tourism but also for trade, education and career advancement.

The kind of culture that such continuing progress has generated is another draw. It is a melting pot on a hill. Hints of the American touch remain, mixing with touches of indigenous Cordillera, the rest of the north, and some foreign populations.

Despite the infusion of various peoples and cultures, the city managed to root itself in nature, what truly began it all. 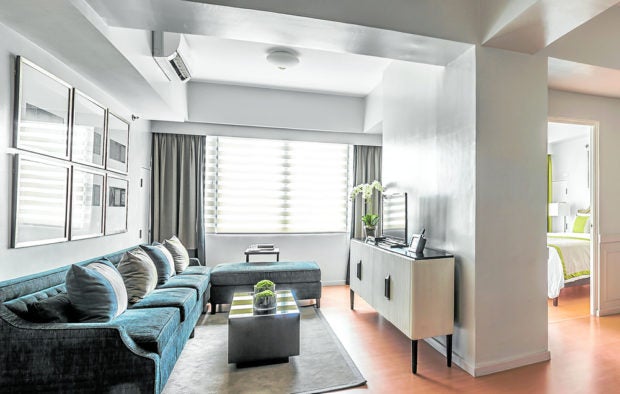 Vista Residences pays homage to that unique relationship between people and environment in its Hill Series, a collection of vertical communities built on key locations within Baguio City. This endeavor, begun in 2017, includes three mid-rise condominiums celebrating the allure of Baguio. They all offer backdrops of scenic roads, thick pine groves or majestic mists.

Brenthill Baguio, the foremost development, is on Yangco Road, right in front of Brent International School. The 10-story project provides views of Baguio’s metro and mountainside. The units, some with their own balconies, are ready for occupancy now. 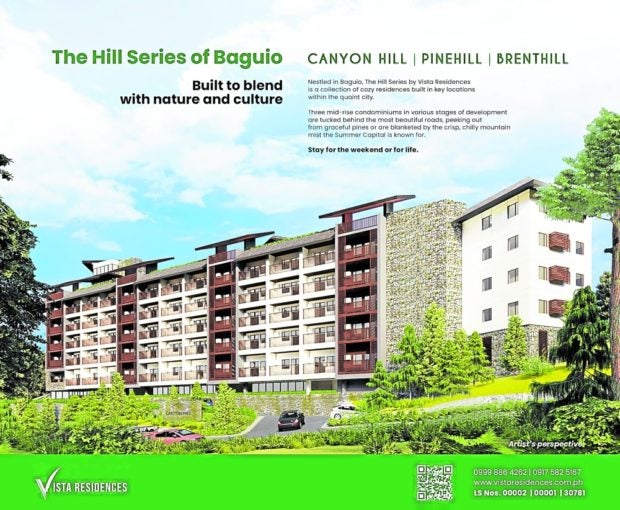 The rest of the portfolio is preselling. The 12-story Pinehill Baguio rises on Outlook Drive, making it adjacent to The Mansion, Mines View Park and food hubs. It offers a low-density spread of condominiums overlooking the slopes east of Burnham Park. The final product under the series is Canyon Hill along Pacdal Road—a nine-story building close to Wright Park and Baguio Botanical Garden.

Designed after cabin-style homes, the Hill Series looks back at the past while providing laidback abodes. But it also nods to the sensibilities of today and the future through modern amenities like a gym, sauna, game room, swimming pool, function room, plus lounge areas and garden decks. All three components are on accessible spots, offer 24/7 security and host commercial spaces.

Vista Residences, the condominium development arm of homebuilder Vista Land & Lifescapes Inc., has offered top-tier properties across the archipelago for years now. Hill Series only proves Vista Residences’ consistency in delivering masterplanned developments in the vertical setting. This project, with studio, one- and two-bedroom units, might swiftly be taken up by a mix of students, young professionals, beginning families, empty nesters and even investors. With tough competition, one must hurry to claim their slice of the city on a hill, Baguio.

Shopping internationally has never been more fun and assuring

PAPO announces new Board, vows to work for patient welfare