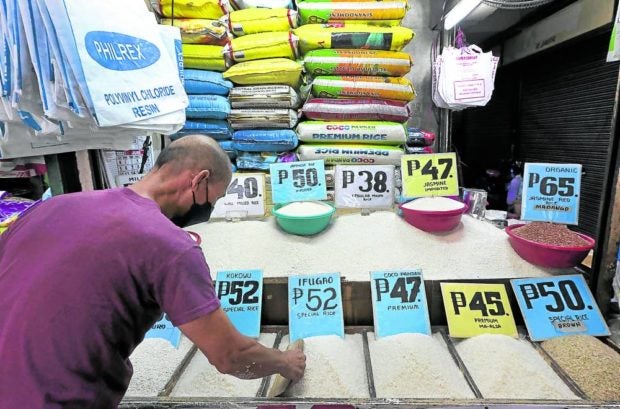 MANILA, Philippines — Filipinos may find it even more difficult to make ends meet as rice prices may increase by as much as P6 per kilogram by the end of this year due mainly to the rising cost of production that could, in turn, dissuade farmers from planting the staple.

This prompted the Department of Agriculture (DA) to seek more support for farmers such as fertilizer subsidies to immediately bring down the cost of producing rice and address the projected decline in the output of palay or unhusked rice.

“If production declines this main wet season due to high fertilizer and petrol prices, and global rice price rise, we will see significant increases in rice prices by the end of this year,” said Agriculture Undersecretary Fermin Adriano in a message to reporters.

This will then make it harder for the incoming Marcos administration to achieve its goal of selling rice at as low as P20 a kilo, although the Department of Agrarian Reform had said that it had crafted a strategy to make this happen.

Based on the DA’s price monitoring as of Tuesday, a kilo of local regular milled rice is selling at P38, the same as last year.

On the other hand, well-milled rice is now at P41 per kilo from P40 per kilo last year.

These prices may not hold for long, however, as according to studies of the Philippine Rice Research Institute, the average cost of producing rice has already increased this year by P3.13 per kilo.

As of the end of 2020, the Philippine Statistics Authority estimated the cost of producing palay at P11.52. Still to be tacked on are the costs of transportation, logistics, and milling.

“Thus, it is imperative for [the] government to give fertilizer and petrol subsidies to farmers now — to prevent productivity decline,” he added.

Earlier, the DA estimated palay output to decline by about 1.1 million metric tons (MT) this year if the government would not be able to provide more fertilizer subsidies. The volume was equivalent to 600,000 MT of rice, good for 10 days.

Adriano said some farmers were forced to reduce their use of fertilizers as the cost of this farm input has nearly tripled, resulting in a lower yield.

The latest figures from the Fertilizer and Pesticide Authority showed the average price of urea (prilled), the most commonly used fertilizer, has shot up to P2,998.55 per 50-kilogram bag from May 23 to 27, significantly higher than the P1,174.43 per 50-kilogram bag in the same period last year.

Adriano said the government has two options to overcome the challenges of palay production: increase productivity by providing subsidies and bring in rice abroad from alternative sources.