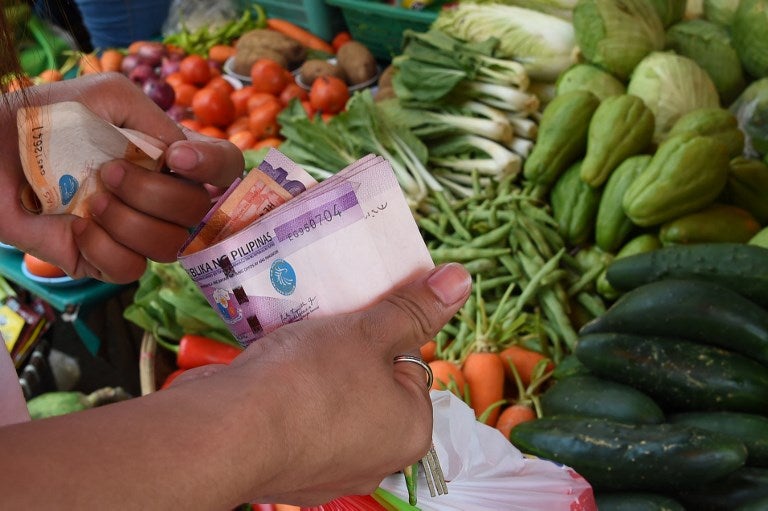 MANILA, Philippines—Expensive oil spilled over to food prices in May and brought headline inflation to a 42-month high of 5.4 percent, the government reported on Tuesday (June 7).

For the country’s chief economist, President Rodrigo Duterte’s order extending lower tariffs on pork and rice while reducing duties on corn and coal to allow more imports would augment food and energy supply in a bid to ease inflation pressures.

The year-on-year rate of increase in prices of basic commodities last month was the highest since the 6.1 percent posted in November 2018, when the country grappled with high rice prices. As of end-May, inflation averaged 4.1 percent, above the government’s 2 to 4 percent target range of manageable price hikes conducive to economic growth.

Prices of food and non-alcoholic beverages rose 4.9 percent year-on-year last May, faster than the 3.8-percent increase in April. Food inflation alone accelerated to 5.2 percent from April’s 4 percent, due to quicker price increases among fish, meat, as well as vegetables.

National Statistician Dennis Mapa said rising transport inflation — mainly due to skyrocketing oil prices wrought by Russia’s invasion of Ukraine — had been gradually spilling over to the food basket — by way of delivery and logistics costs — during the past few months.

While there had been ample food supply, Mapa for instance noted that supply chain disruptions, especially in the case of flour, made bread more costly.

“In contrast, rice inflation remained stable and decelerated to 1.5 percent amid the implementation of the Rice Tariffication law and Executive Order (EO) No. 135, which diversified the country’s rice sources,” the Neda statement said.

“Private transport inflation accelerated to 47.9 percent from 44.4 percent, while public transport remained muted at 1.6 percent due to fare regulation. Household inflation for electricity, gas, and other fuels also remained high even with a slight deceleration at 18.8 percent from 19.9 percent,” Neda added.

Besides food and oil, Mapa also pointed to faster price increases in alcoholic beverages and tobacco, as well as utilities like electricity and LPG costs.

Inflation outside Metro Manila picked up to a faster 5.5 percent last May from April’s 5.1 percent. Price hikes in the National Capital Region (NCR) were slower at 4.7 percent year-on-year although also up from 4.4 percent in April.

“The Russia-Ukraine conflict has disrupted the global supply chain and elevated commodity prices, particularly for fuel. We have seen how a single crisis can set us back, so the Duterte administration has pursued both short- and long-term interventions to increase the resilience of our domestic economy against external shocks,” Socioeconomic Planning Secretary and Neda chief Karl Kendrick Chua said in a statement.

“To help cushion the impact of higher fuel prices on the most vulnerable, the government has increased the total budget for targeted subsidies to P6.1 billion,” Chua said.

“Moreover, to facilitate the entry of more goods at lower prices, President Duterte issued EO 171 to modify tariff rates for pork, corn, rice, and coal. EO 171 extends the validity of EO 134 and 135, which lowered the most favored nation (MFN) tariff rates for the importation of pork and rice. The EO also reduces MFN tariff rates for corn to 5 percent in-quota and 15 percent out-quota, citing that corn accounts for more than 50 percent of the total production cost of large-scale broiler and swine farms,” Chua added.

“To help maintain or lower electricity prices, EO 171 also temporarily eliminates the 7-percent MFN import tariff rate on coal as it is an important raw material in the generation of electricity. These temporary measures are expected to increase our food supply and ease higher electricity costs in the short-term,” according to Chua.

In a report, Pantheon Macroeconomics chief emerging Asia economist Miguel Chanco said the UK-based think tank jacked up its full-year 2022 inflation forecast for the Philippines to 4.8 percent from 4.3 percent previously.

But for Chanco, food and transport inflation “will soon peak, if they haven’t done so already, and are likely to see a sustained slowdown in the second half of this year, even if global oil prices remain sticky.”

“We continue to believe that the Bangko Sentral ng Pilipinas’ (BSP) second rate hike this year, which we expect to take place this month, probably will be its last for 2022,” Chanco said.