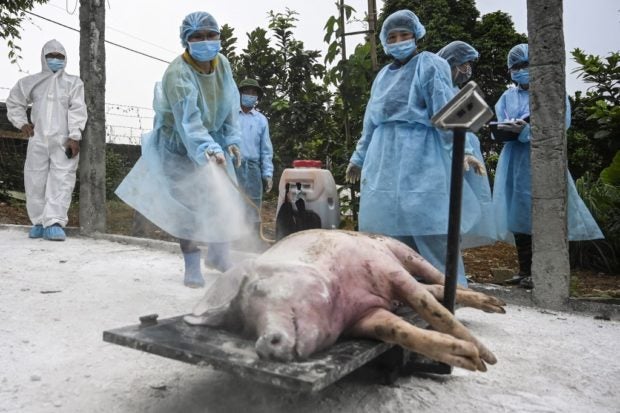 (FILES) In this file photo taken on May 27, 2019, health officials spray disinfectant on a dead pig at a farm in Hanoi before burying it in an isolated quarantined pit to stop the spread of African Swine Fever. (Photo by Manan VATSYAYANA / AFP)

HANOI — Vietnam has developed an African swine fever vaccine for pigs in partnership with the United States, and is aiming to become the first global commercial exporter, an official said.

The virus, harmless to humans, decimated hog populations in Asia after it was detected in Vietnam in 2019, with millions of the animals culled following outbreaks in Mongolia, Cambodia, Hong Kong and mainland China.

Pork prices rose dramatically as a result, devastating global food chains, with Vietnam among the worst hit in Southeast Asia.

“The production and commercial registration of the vaccine is a historic event,” deputy minister of agriculture and rural development Phung Duc Tien said Wednesday.

“We are confident to produce pig swine fever vaccine for domestic prevention and will also aim at export,” he said.

However, officials did not give a timeframe for the vaccine’s rollout or any indication of Vietnam’s capacity to produce it at scale.

He said the Agricultural Research Institute of the US Department of Agriculture had “sent an official letter to the Department of Animal Health of Vietnam confirming that the NAVET-ASFVAC vaccine is safe and effective”.

“The immunity length of the vaccine is six months,” Tien said.

Five Vietnamese clinical lab trials “showed 100 percent of vaccinated pigs were protected against toxicity in the laboratory”, he added.

An official circulation license for Vietnam would be issued Friday at a ceremony launching the jab, the Department of Animal Health said.

Duterte declares state of calamity due to African swine fever