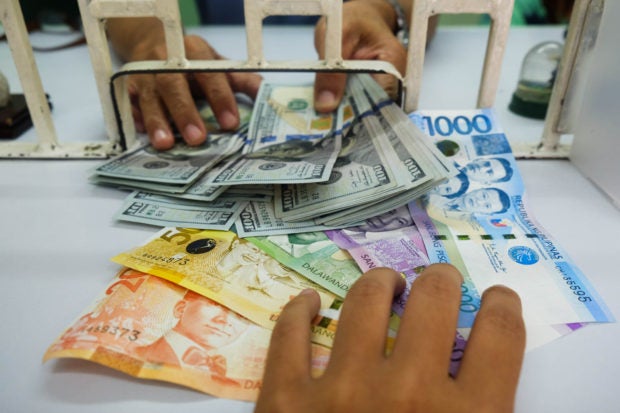 “Remittances in the Philippines disappointed in February, with growth slowing to 1.3 percent year-over-year, from 2.5 percent in January. Not only was the result off the mark against the 3.6-percent consensus, but it also represented the weakest print in over a year,” Pantheon Macroeconomics chief emerging Asia economist Miguel Chanco noted in a report Monday.

Chanco said softer remittance increases started late last year, and it did not help that the United States—the Philippines’ top source of remittance inflows — already had a tight labor market.

On the positive side, Chanco said “transfers from the rest of Asia and the Middle East could see renewed momentum on the back of the more lasting reopening of international travel and the recent pop in oil prices.” Oil-rich countries in the Middle East host millions of overseas Filipino workers (OFWs).

“Crucially, however, the honeymoon in inflows growth in peso terms—which matters more for spending—will end soon, as the lift from the currency’s sell-off last year falls out of the picture,” Chanco said. The peso continues to weaken against the US dollar, with the “twin” budget and current account deficits expected to put depreciation pressure on the domestic currency.

“Structurally, the general stagnation in the number of overseas workers since 2016 remains a big headwind, and we reiterate that remittances no longer go as far as they have in the past in lifting spending directly,” Chanco said.

Chanco early this month said that remittances’ impact on consumer spending would be tempered by elevated inflation and depleting savings amid the prolonged COVID-19 pandemic.

“Remittances still aren’t rising fast enough to justify a continuation of double-digit sales growth. Admittedly, households are getting much more bang for each buck, due to the sharp turnaround of the peso’s fortunes in the middle of 2021,” Chanco had said.

“In the past, a rapid rate of remittances growth likely would have been enough to provide a material cushion to the coming moderation in sales growth. But today is different, as fewer and fewer households are using remittances for big-ticket purchases. The share of recipient households who use part of these transfers for day-to-day spending has been relatively stable since COVID-19 hit, at 96 percent,” Chanco had noted.

“However, the pandemic appears to have accelerated the structural decline in the use of this cash for appliances and other durable goods, while remittances are also being geared less towards bigger-ticket items, such as cars and homes. More than ever, people are using remittances for investment and other unclassified purposes,” according to Chanco.

Remittances from Filipinos abroad expected to rise by 4% in ’22