BSP may raise key rates to head off inflation 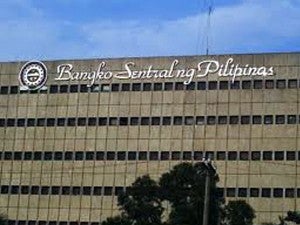 ANOTHER RISE. The BSP is expected to again raise key policy rates next week by 25 basis points. (bsp.gov.ph)

The Bangko Sentral ng Pilipinas may decide to raise its key policy rates by 25 basis points next week as inflation is expected to peak in the next few months, according to Standard Chartered Bank.

As a result, the BSP’s overnight borrowing rate may rise to 4.75 percent, and the lending rate to 6.75 percent.

Authorities are scheduled to meet on June 16 to decide on the monetary policy.

In a research note, Standard Chartered raised the gross domestic product (GDP) growth forecast for the Philippines this year to 5.7 percent from 5.4 percent in light of “more sustainable growth dynamics.”

“We believe inflation expectations are yet to be anchored, and are still vulnerable to commodity-price volatility,” the British banking giant said.

“Meanwhile, benign fundamentals suggest that a further normalization of monetary policy is required to contain overheating concerns, given that real policy rate remains close to zero.”

Standard Chartered also said that with inflation expected to peak in the coming months, the BSP would likely cease its tightening measures in the third quarter to focus on domestic liquidity.

“With growth momentum expected to pick up in the second semester, we expect BSP to resume tightening with two 25-basis point hikes in the fourth quarter,” the bank said.

This means that the borrowing rate may climb to 5.25 percent while the lending rate will rise to 6.25 percent.

Regarding growth in total output, the bank believes that the main push in expansion will shift from consumer spending to business investments and that momentum will pick up in the second half of the year.

“Looking ahead, we expect business sentiment to stay resilient, despite uncertainties related to EU sovereign debt problems,” it said.

“While we expect GDP growth to slow further in the second quarter due to the high base effect and temporary disruptions to electronics manufacturing from the Japan earthquake, the underlying fundamentals of the economy remain solid,” the British bank stated.