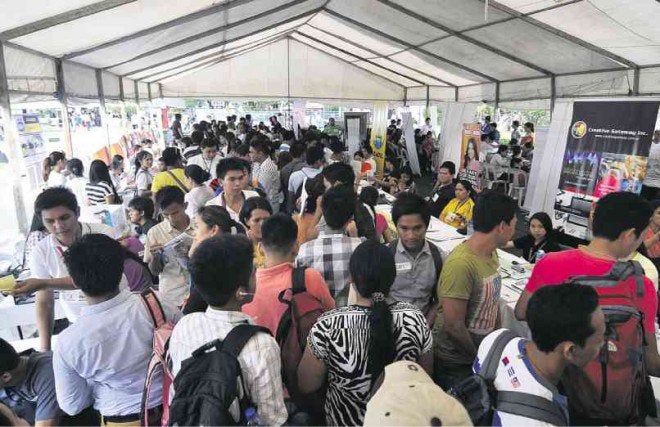 Applicants for employment at a job fair. (INQUIRER.net FILE PHOTO)

MANILA, Philippines—Nearly half of young Filipino workers are considering changing jobs over the next year as their priorities shift to health and well-being in the post-pandemic era, technology giant Microsoft said in a new survey.

The results of Microsoft’s 2022 Work Trend Index underscored evolving views toward the hybrid home and office work setup. It also revealed similar trends around the world—a warning for out-of-touch companies and managers to adapt and “rethink the role of the office” to stay competitive.

“There’s no erasing the lived experience and lasting impact of the past two years, as flexibility and wellbeing have become nonnegotiables for employees,” Jared Spataro, corporate vice president, Modern Work, Microsoft, said in a statement on Monday (April 18).

“By embracing and adapting to these new expectations, organizations can set their people and their business up for long-term success,” he added.

Perks, like free office food and a corner office, mattered less as 53 percent of global workers surveyed—the figure going up to 67 percent in the Philippines— adopted a new “worth it” equation that prioritized health and wellbeing over work.

Microsoft’s survey, which covered 1,000 respondents each in 31 countries, also showed that 46 percent of Filipino Gen Z and Millennials, or employees in their 20s and 30s, were “somewhat or extremely likely to consider changing employers this year.”

“[A]s more people experience the upsides of flexible work, the more heavily it factors into the equation. For Gen Z and Millennials, there’s no going back,” Microsoft said in its report.

Further, 20 percent of Filipino workers have already left their jobs in the past year, larger than the 18 percent average indicated the survey.

The top reasons employees quit were personal wellbeing or mental health, work-life balance, risks of getting COVID-19, lack of confidence in senior leaders and lack of flexible work hours or location.

A major issue for Filipino workers was traveling to the office as the country’s urban centers struggle with congestion and lack of efficient mass transportation.

But Filipino company leaders and employees still held vastly different views on returning to the office.

The survey showed that 69 percent of company leaders were planning a return to full-time, in-person work in the next year, larger than the global average of 50 percent.

At the same time, 46 percent said leadership was “out of touch with employee expectations” while 81 percent of company managers says “they don’t have the influence or resources to drive change for their team.”

Part of the push for office work came amid the Philippine government’s controversial order for the business process outsourcing sector to unwind much of the work from home setup despite protests by employees.

For Microsoft, companies have an opportunity to harness technology and “reimagine work-life integration as a win-win.”

“As the world continues to evolve, organizations that take a culture- first, learn-it-all approach will come out ahead,” it said in the report.

Jobs for Filipinos: Dark past and present, uncertain future