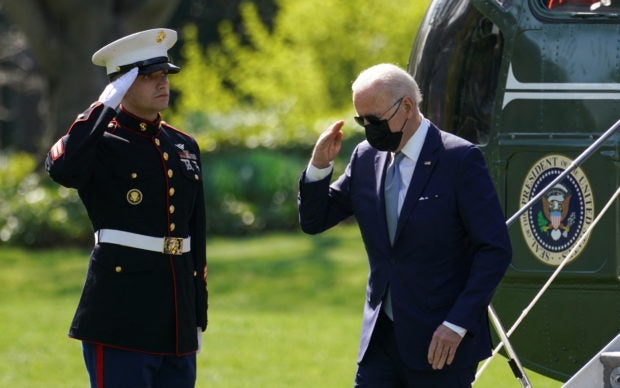 U.S. President Joe Biden returns a salute as he steps from Marine One upon arrival at the White House in Washington, U.S., April 11, 2022. REUTERS/Kevin Lamarque

MENLO, Iowa — U.S. President Joe Biden unveiled plans on Tuesday to extend the availability of higher biofuel blends of gasoline during the summer to curb soaring fuel costs and to cut reliance on foreign energy sources.

The move, announced during a trip to an Iowa ethanol plant, represents the administration’s latest attempt to tamp down inflation, which hit a new 40-year high on Tuesday.

Biden’s poll numbers have sagged under the weight of higher consumer costs and inflation is seen as a significant liability heading into the November mid-term elections.

The decision represents a win for the U.S. corn lobby by likely expanding demand for corn-based ethanol and a setback for oil refiners, which view ethanol as competition.

The measure will allow Americans to keep buying E15, a gasoline that uses a 15% ethanol blend, from June 1 to Sept. 15. While E15 is only 10 cents cheaper on average and is less “energy dense,” meaning drivers would need to buy more fuel, it should still help lower expenses, senior administration officials told reporters on a Monday call previewing the announcement.

Only a few thousand U.S. gasoline retailers offer E15 at the pump and they must turn off the pumps during the summer season to comply with existing law. Biden told the crowd in Iowa that will change this summer, if only temporarily.

“You’re not going to show up at your local gas station and see a bag over the pump that has the cheapest gas. You’re going to be able to keep filling E15,” Biden said.

He added there is more to do to bring down gas prices.

“It’s not going to solve all our problems,” Biden said.

The decision comes after several weeks of internal debate within the White House that pitted environmental advocates like Gina McCarthy against Agriculture Secretary Tom Vilsack, a former governor of Iowa, according to two sources familiar with the discussions.

The summertime ban on E15 was imposed over concerns it contributes to smog in hot weather, though research has shown that the 15% blend may not increase smog relative to the more common 10% blends sold year-round.

“Your family budget, your ability to fill up your tank, none of it should hinge on whether a dictator declares war and commits genocide a half a world away,” Biden said.

Biden last month announced that the United States would sell 180 million barrels of crude from the Strategic Petroleum Reserve at a rate of 1 million barrels per day starting in May, the biggest release from the stockpile since it was created in the 1970s.

Biden made the E15 extension announcement during a visit to POET Bioprocessing, the largest biofuels producer in the United States in major corn producing state Iowa.

“We applaud President Biden and his administration for recognizing that low-cost, low-carbon ethanol should be given a fair opportunity to strengthen our energy security and reduce record-high pump prices,” Renewable Fuels Association President Geoff Cooper said.

Representatives of the oil industry slammed the administration for the decision.

To make the change, the Environmental Protection Agency (EPA) is planning to issue a national emergency waiver closer to June, administration officials said. The EPA is also considering additional action to allow for the use of E15 year-round, the White House said.

The American Fuel and Petrochemical Manufacturers (AFPM) industry group questioned whether the expansion of E15 sales was lawful, arguing the EPA waiver being used is reserved for specific unforeseen events, such as hurricanes.

The courts struck down a prior bid by Biden’s predecessor, Republican Donald Trump, in 2019 to extend a waiver that allowed year-round sales of E15.

The officials previewing Biden’s announcement said his administration would use a different “approach” and “authority” than Trump, but did not offer details.

They also said the EPA would work with states to ensure that there would be no “significant” negative impact on summer air quality due to the extended sale of E15.

RELATED STORY:
Factbox: When have the United States and others previously released oil from reserves?