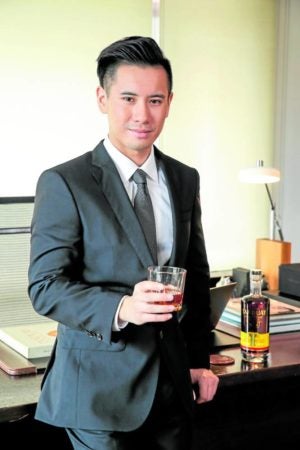 NEW BLOOD Tan heeds the call of duty, takes the helm of the liquor company that his late father loved. —Contributed photo

Lucio Tan III was firmly on his way to making a name for himself in the high-flying technology space in the United States when his father suddenly died in November 2019, forcing him to give up his budding career, come back home and dutifully take his place in the sprawling group founded by his grandfather.

Since Tanduay Distillers Inc., the country’s third largest distilled spirits producer, meant the most to Lucio Jr., it was but natural that he would take a more direct hand in it, unlike in the other Tan companies such as Philippine Airlines and Philippine National Bank where he sits as director, far removed from everyday operations.

And after a little more than two years at the helm, Tan has become more comfortable in his position as Tanduay president and chief operating officer and with the massive responsibilities that come with it, no thanks to the COVID-19 pandemic that pushed him to radically shorten his learning curve, and in the process prove that he deserves to handle the reins of the billion-peso company even at a tender age of 29.

Net income improved to P1.2 billion last year—the highest since the Tan group bought the company 34 years ago —from P1.1 billion in 2020, with net revenues rising 6.7 percent year on year to P26.7 billion, mainly due to the improvement in the sales of bioethanol and the higher selling prices of liquor products.

Tanduay, which produces and distributes rhum, brandy, whisky, gin and other alcohol products with Tanduay ranked the world’s fourth top spirits brand, enjoyed a 27-percent share of the Philippines’ growing and fiercely competitive spirits market in 2021.

It’s worth noting that even at the height of the pandemic in 2020 that saw the imposition of extended liquor bans in some key cities and provinces, Tanduay managed to significantly boost its income to P1.1 billion from P676 million in 2019, a feat attributed to higher pricing and improvement in sales volumes across brands led by the award-winning Tanduay Rhum.

“It is all thanks to the team,” Tan, nicknamed Hun hun, tells the Inquirer in an interview.

Tan has gotten to know his team quite well over the past two years, as he holds longer and more regular meetings with key lieutenants compared with his father, even if many of these meetings had to be done virtually because of the COVID-19 pandemic. Through these, he gets a better feel for and knowledge of how the company is doing. He is also able to draw valuable insights into where further improvements can be made and what opportunities can be taken advantage of.

He mandated that all members of the management committee be present at these different meetings—be it with sales, finance, production or supply chain—for better alignment, as everyone will know what everyone else is doing.

Having a single data point has allowed the organization to immediately draw trends and gather updated financial results needed to make better informed decisions, such as what new products can be launched based on trends and historical sales data. Visayas and Mindanao have proven to be loyal to Tanduay, so the challenge is to penetrate more areas in Luzon and the data will help Tan and Tanduay do exactly that.

Dealing with numbers is clearly easy for Tan, who also has a master’s degree in computer science from Stanford, and well within his comfort zone where he thrives.

“I like working with data; it’s a lot easier to work with quantitative facts,” says Tan, “of course, there’s a time and place for the feelings as well, especially with sales and marketing.”

As Tan learned to his pleasant surprise on his first birthday with the company in Oct. 2020, “feelings” have a place well beyond sales.

“That’s one thing that’s really crazy. I found how people really value birthdays. No one ever remembers my birthday. I forget sometimes. But my first birthday here was like a Zoom. I open up and it’s like the whole Tanduay, the whole board [out there to greet]. That’s crazy,” recalls Tan, who has now taken to giving away birthday cakes, too.

“In the US, it’s always business as usual,” Tan says, “But I’m slowly adapting to the culture. There are a lot of differences.”

“First of all, I feel like it is a lot more family-based here. It definitely feels a lot closer, there’s a lot more of an emotional connection with your employees. In the United States, it’s very business-oriented, very professional, which is also very good. It has its pluses and its minuses,” he adds.

Before he suddenly moved back to the Philippines, Tan was a software engineer on the payments team of Lyft, a San Francisco-based ride-sharing giant. There, he led a small team of engineers who basically made sure that Lyft users would be able to easily pay for the Lyft service.

“It was really cool because like every time [we took] a Lyft ride, I [would] always geek out and say, look, I built this. You see, we’re getting charged because of me! It was a lot of fun,” he shares.

Prior to his two-year stint at Lyft, Tan interned at technology giants Facebook and Apple, where he absorbed the best software development practices and learned about having a structured environment. He, however, decided to move on to Lyft for the chance to take ownership or stewardship of a specific process and witness the entire chain from app creation to final deployment and production.

“I basically was involved with the creation of a service all the way to the execution … The debugging process, you have to own it as well. It’s really that entire component of the software development chain that I got to hold and that’s something that I appreciated a lot during my time at Lyft,” says Tan, who was up for promotion to senior software engineer when he had to go home.

Tan, however, has no regrets. And while he is no longer directly working on software at Tanduay, he nevertheless gets to apply the same approach to managing the company with the goal of making it a bigger contributor to the Lucio Tan group’s bottom line.

“It’s more about problem solving. At the end of the day, a lot of these problems can be broken down. From an engineering standpoint. It’s about building blocks. You approach each of these problems separately and then, hopefully, you enter into a larger solution … Another thing [that helps] is definitely the math background; that I was an electrical engineer at Stanford and got my master’s in computer science there as well,” he says.

“The mathematical maturity makes it a lot easier for me to understand [problems and how to solve them].”

Tan admits to not having appreciated a financial statement before joining Tanduay, but the pandemic that forced people to stay indoors for months on end, like himself in his grandfather’s house, accelerated his onboarding from a business standpoint.

“From a social standpoint, definitely I have a ways to go. But hopefully, we can start doing more of that now that the pandemic has eased,” Tan says, “At some point, I’d love to visit the different production plants and even some of the sales offices.”

Tan is keenly aware that he is being observed and the pressure to bring in the desired results can be heavy, especially given his age and the circumstances that led to his joining Tanduay. But he is confident in his abilities and the full support of his team – all of them veterans in the industry.

“At the end of the day, success is never created overnight. It’s always formed by the day-to-day choices that you make. For me, it’s about following my principles. For me, integrity is always number one. And it’s operating within that framework. Second is diligence,” Tan says, “No matter what the circumstances, you give it your best effort and try to figure out how you can approach and tackle problems.”

“From a day-to-day basis, that’s what I do. I can’t control what’s going to happen three years from now. There’s no point stressing about that. What I can control is what I do today. How do I make a difference today? I feel like that takes a lot of the unproductive, stressful spinning going on out of my mind.”

For him, the mission is clear: make Tanduay an even more formidable force in the spirits industry, not just here but abroad, with his own management style at work, which is in stark contrast to that adopted by his father.

“He was free-spirited and out of the box in his thinking while I am very structured. He always had a free-flowing mind, a different way of viewing things. I admired that about him and his being forward-looking. He liked to try new things,“ says Tan, adding that he is happy where he is now, laser-focused on Tanduay and helping his family.

“I’m happy I get to bring stability to the family during this time of need, essentially through these tumultuous times, the pandemic, the transition. That’s what I’m focused on right now,” he says.

Taking on a possibly bigger role in his grandfather’s group will therefore have to wait. INQ