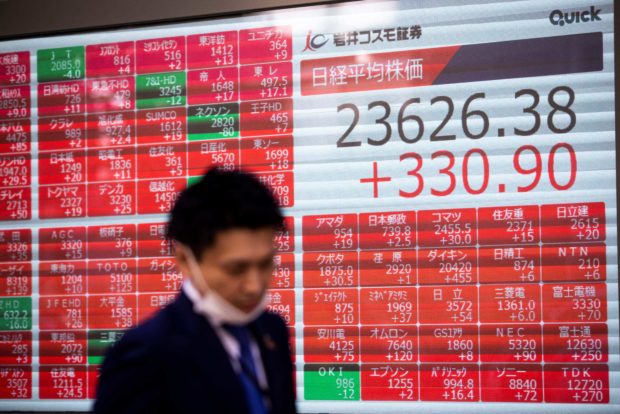 HONG KONG – Asian markets fluctuated Monday with traders hopeful for some progress in ceasefire talks between Russia and Ukraine this week, though a phased lockdown in Shanghai led to fresh concerns about already strained supply chains.

Growing expectations that the Federal Reserve will become increasingly aggressive in its drive to bring down inflation continue to dampen sentiment, with Treasury yields — a gauge of future interest rates — surging.

With the war in Ukraine now in its second month, investors are hoping the two sides will be able to make inroads on ending the crisis when they meet in Turkey, either on Monday or Tuesday.

Ukraine President Volodymyr Zelensky said he hoped they would bring peace “without delay”, despite several previous rounds failing to overcome disagreements about Kyiv’s alignment with the West and Russia’s occupation of eastern parts of the country.

But there is a hope that Moscow could be willing to de-escalate as its troops struggle to break dogged resistance from its much smaller opponent.

Zelensky has previously indicated he is “carefully” considering a Russian demand of Ukrainian “neutrality”.

While the slither of hope for a ceasefire is providing some support to markets, concerns about China’s economy continue to keep optimism in check.

Shanghai, the country’s biggest city and financial hub, will launch a phased lockdown to curb an Omicron outbreak with the east shutting down Monday to Friday, followed by a similar measure in the west from April 1.

The news weighed on oil prices as traders weighed a possible hit to demand in the world’s biggest crude consumer. Both main contracts were down more than two percent Monday, though they remain elevated by ongoing concerns about supplies caused by the war in eastern Europe.

Still equity markets were mixed, with Hong Kong up more than one percent after suffering hefty losses Friday, while Sydney, Seoul, Singapore and Jakarta were also higher.

While stock markets have managed to remain resilient in the face of heightened uncertainty, concerns that the Fed will ramp up interest rates continue to cast a pall.

Wall Street banks have called for several half-point rises before the end of this year, with Citi looking for a 3.75 percent rate by January and Bank of America 3.25 percent.

The push for tighter borrowing costs comes as inflation sits at 40 year highs in the United States, while other central banks have been forced to act quicker and harder on rates as they see prices soar.