As offices have begun admitting returning staff, and employees relearn how to walk in sensible work shoes dressed in prescribed office attire, the work-from-home setup is slowly retreating into the distant past. In order to shake off the lethargy and boldly move forward, a spanking new office could be the shot in the arm needed to jumpstart operations.

That’s exactly what greeted the employees of Robinsons Land Corporation (RLC) – Office Buildings Division when they reported back to work en masse. Back in the middle of the pandemic, RLC employees reported for work at their former office. It was only in January that the new space was opened to welcome them. Senior Vice President and Robinsons Offices General Manager Jericho Go is aware that those who have been working from home had gotten used to a routine where everything was within easy reach. Hence, he and his team made it a point to include a list of features into the office design that would help make it a “home away from home”. 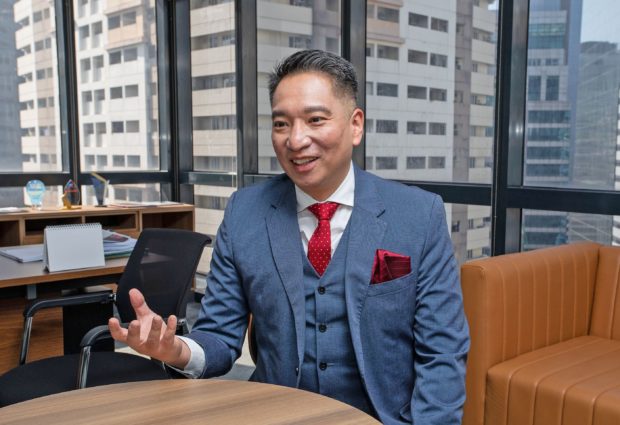 Go sees the bigger picture when it comes to reporting back to work. Aside from increasing productivity through the use of commercial grade equipment and technology, face-to-face interactions encourage greater collaboration and camaraderie. In addition, the act of going to and working at the office has a multiplier effect that ripples out and beyond, benefiting so many other people who have struggled with the effects of the pandemic.

When people head back to the office, they take public transport, buy food and necessities from mall tenants, and augment their office wardrobe. The effect of returning to work may prove to have a wide ranging and very significant impact to the economy. During the pandemic, the sector most affected in terms of jobs lost is the Micro Small & Medium Enterprises (MSMEs).

According to DTI, the biggest employer in the country comprising about 63% of total jobs is the MSME sector. MSMEs are wholesale and retail traders, shops catering to the repair of motor vehicles and motorcycles, as well as accommodation and food service providers, to name a few. Encouraging people to return to work will help reinvigorate the economy in support of the recovery of MSMEs from the negative effects of the pandemic.

Go is adamant that the only wayto emerge from this pandemic is to move forward, and bravely march into “a better normal.” It’s a phrase he has taken to heart. In fact, he’s optimistic their new office at the 25th floor of Robinsons Cyberscape Alpha in the Ortigas CBD will help in cultivating a culture of trust and cooperation, and increase employee engagement.

From the get-go, the open-floor layout exudes a dynamic vibe as it makes the space appear larger and ready to welcome more people. Unlike traditional offices that consist of islands of gray cubicles with low partitions, theirs is divided into clearly delineated segments.

Studied use of color, texture

Colors and textures are judiciously used and can be seen throughout the space. The reception area (or Veranda) is where guests have a view of a vertical garden that creeps up the ceiling and acts like a welcome arbor. A trellis gives a peek into the main work area and the Sala features ergonomically-designed chairs in cool sorbet-colored upholstery. There are also two swing seats attached to the ceiling for employees who want to sway as they sit. 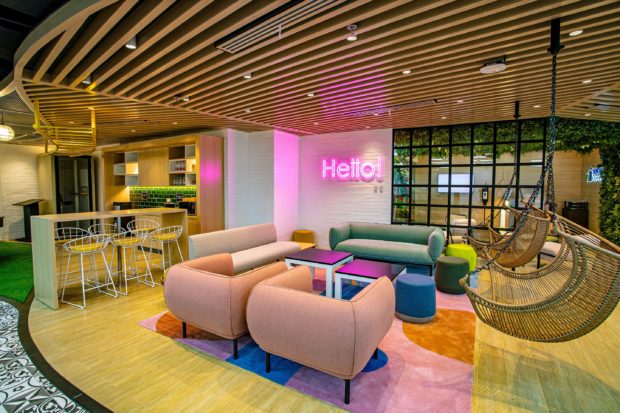 The colorful Sala (foreground) is where teammates and guests lounge and enjoy IG selfies too! Beside the space is one of the office pantries with a bar counter, where colleagues can chat over a cup of coffee or tea and serve as an alternative office station.

Located at the far right as you enter the main workspace is the Town Hall for large group meetings and First Friday masses. With its three-tiered stadium-style risers made of blonde wood flush against the wall and two wall-mounted shelves that keep 72 stools within easy reach, the Town Hall can easily seat 150 people. Once meetings are over, the boxy stools can be slotted back into place thus keeping the space clutter-free. 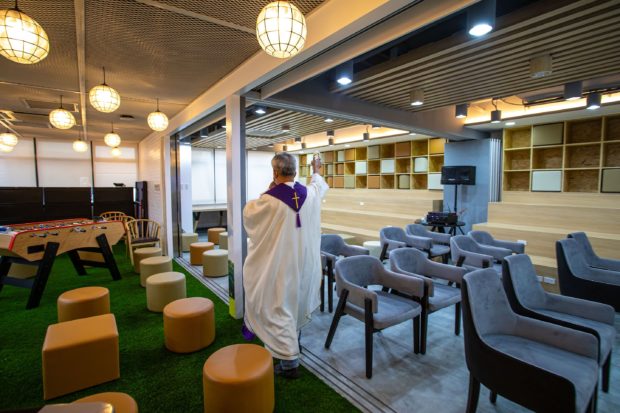 An office blessing and First Friday mass were held to formally inaugurate the new headquarters of Robinsons Offices. To keep its employees inspired and motivated, First Friday masses will be held regularly in its Townhall.

A winding, border-like path of graphic black and white Machuca tiles separates the work spaces from the rest-and-play areas. In the Playground, there’s a foosball table, a billiard table and a pingpong table. There are even monkey bars secured to the ceiling and located next to a high table with barstools. 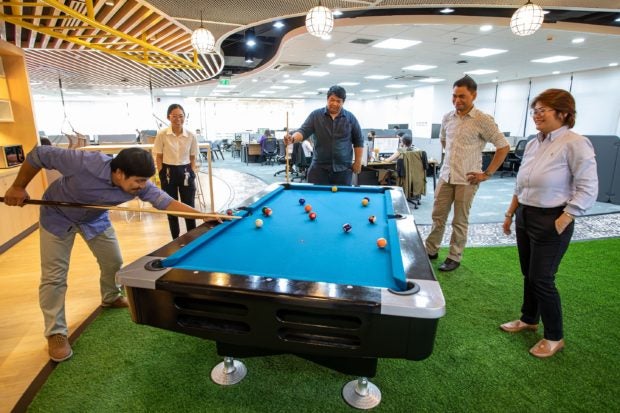 Employees sometimes find their drive at work by bonding with colleagues over games like billiards.

“We will eventually have a chess board and an air hockey table,” Go said. “Why are we doing this? With the absence of contact sports like basketball and volleyball, we realized people needed to interact with one another. We’re even planning to hold tournaments within the group.” 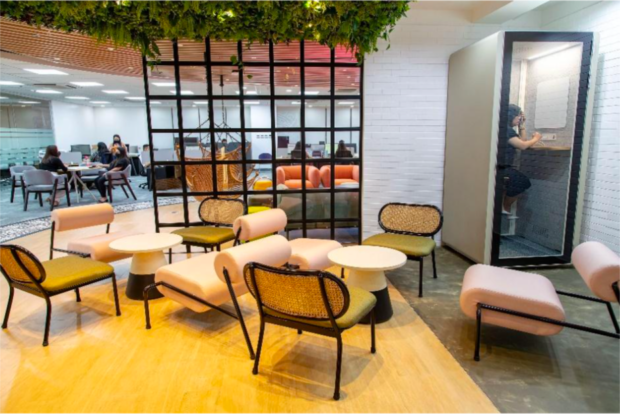 Robinsons Offices’ reception area (the VERANDA) is the place where guests can comfortably sit on ergonomically designed chairs in cool sorbet-colored upholstery as they wait for their host.

On the other side of the Veranda is the office pantry outfitted with ochre Machuca tiles and frame seats with solihiya details. The traditional woven design is repeated in a series of wood frame panels mounted on one wall. There is also a coffee machine for employees who would like to get their midmorning or afternoon caffeine fix like they would if they were at home.

Even the lighting is carefully considered and designed to remind employees to take a break once in a while. Lights over the work areas are bright white, but not glaring. On the other hand, those in the rest areas are a complexion-enhancing yellow like the round capiz pendants hung high over the Playground.

“We know that almost everyone is coming from a work-from-home setup. They might have grown so accustomed to it after two years so we’re hoping with the layout in the new office, they will feel like they’re at home but in a space that has far better wifi connection and more chances for them to reacquaint themselves with their officemates,” Go said. 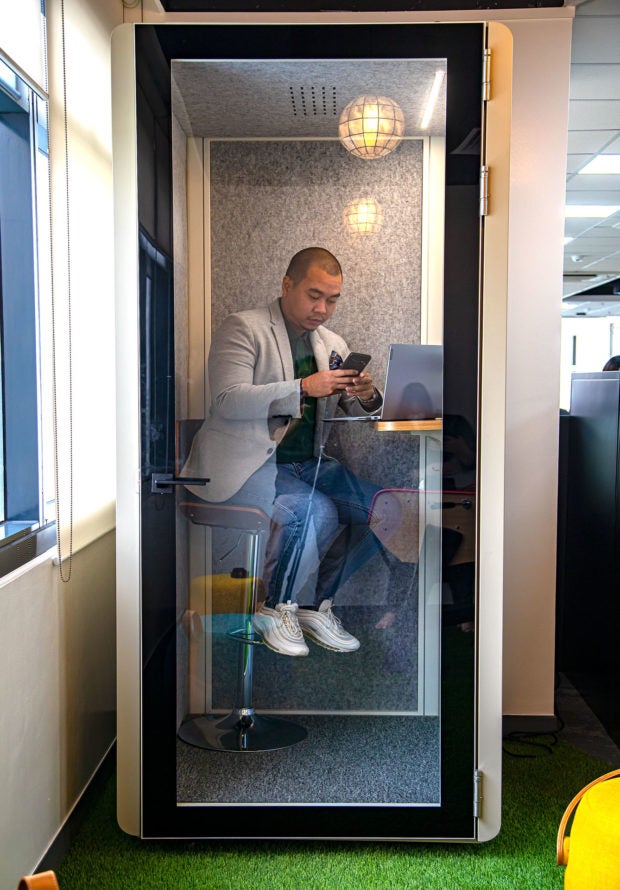 The office is equipped with three privacy pods or phone booths. These are built with proper ventilation and various socket outlets for employees to conduct confidential business calls and emails.

The office is outfitted with three privacy pods (the phone booth) with proper ventilation that employees can enter singly and where they can conduct confidential business calls. Two meeting rooms were designed to inspire creative thought. The Sky Room is equipped with white pendant lamps hanging from the ceiling at various heights, and showcases a view of the Ortigas skyline outdoors and the Hong Kong skyline (a glossy mural-sized photograph) on one wall. The Green Room, on the other hand, is outfitted with mottled, moss-green carpeting and a wall-sized photo of lush trees in a forest. Go says the Sky Room was designed to remind the team to set their sights high (“Sky’s the limit”) while the second was done in shades of green to help them come up with more creative ideas. 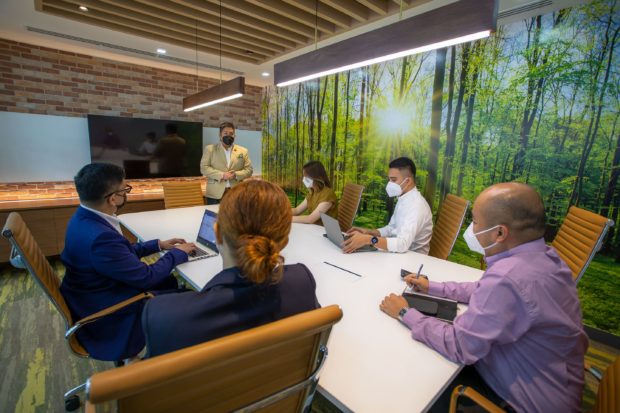 One of the office’s meeting rooms, dubbed as The Green Room, is furnished with mottled, moss-green carpeting and a wall-sized photo of lush trees in a forest. This is where creative ideas are being cultivated.

“As business development professionals, we want to make sure that they have very creative ideas, something that can really jumpstart business,” he said. It’s thoughtful touches like these that set their office apart from the rest but Go has even much loftier goals.

“Robinsons Offices has a higher purpose: to be in the service of our fellow men for the greater glory of God (Ad Majorem Dei Gloriam). When we do our jobs well, this leads us to develop more office buildings that then become a catalyst for growth as they promote and induce job creation.” 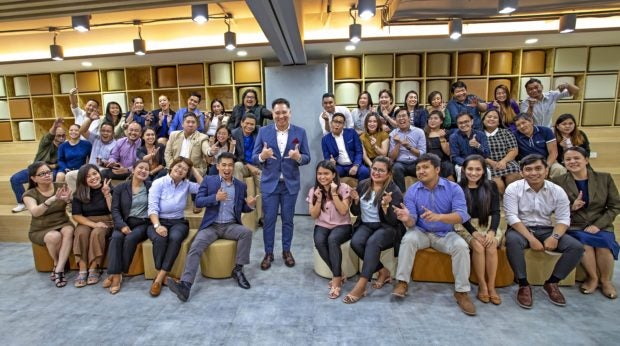 Happy and energized. Robinsons Offices team is ready for the better normal.

Go is hopeful that by creating jobs in the metro as well as in the provinces, they will help promote reverse migration so that Filipinos will not be forced to seek work away from home.

“We give OFWs the opportunity to come back to the Philippines to work here instead of abroad, and to provide a choice for those in the metro to return to their provinces. We’re hopeful that the day will come when no mother, father, sister or brother will ever have to go abroad again because they are forced to seek employment in a foreign land to help the family survive,” he said.

“Our mission is to keep the Filipino family together. This is why we are passionate about the work that we do. We know that what we do matters,” he added.