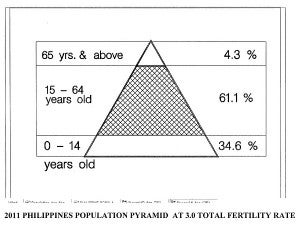 It is unclear how the country will reach 126 million population in 2030.

The average Filipina of reproductive age with 6 children 35 years ago, has only 3 children today because of lifestyle change. Half of all women in the country today use artificial contraceptives. Family size has gone down from our grandparents’ time to ours. At the present rate, the Philippines will be at 2.1 total fertility rate or zero population growth by 2025.

Exactly 51 countries or one-third of all countries now have below replacement level total fertility rate, or TFR. China with 1.6 billion and India with 1.3 billion population attribute their new prosperity to their huge population.

The Moscow Demographic Summit of June 2011 declared that nearly half of all mankind today are living in countries where the birth rate is no longer able to replace the older generation, and that depopulation is the world’s next irreversible crisis.

The real problem concerning the number of poor people in the Philippines is that out of every P10 that the government spends, at least P3 go to corruption. Imagine if that money went to education, infrastructure and healthcare.

The solution is not to mandate every couple applying for a marriage license to go through modern family planning instructions, thus making contraceptive sex a component of marriage, and using taxpayers’ money. Talk of intrusion into the bedroom. 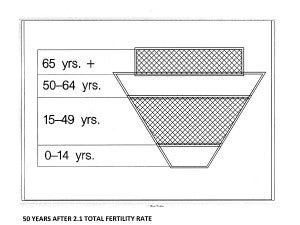 As the youngest sector of our population shrinks, the economically active people will eventually reduce in number over the years. The experience of all countries that legalized artificial contraception shows that in 50-60 years, the population pyramid inverts, and then it becomes necessary to solve the problem of too many old people.

What started as a population problem becomes an economic problem. This trend is irreversible. It is not a matter of opening and closing the water faucet.

The Asia City Innovation System Project collaborated by six Asean cities sees Manila as an educational hub in Asia. This will require initiatives to attract career in education. Most schools in the future will be privately owned, and the quality of education will be dictated by forces of competition.

Nontraditional educational training programs will mushroom due to the need for specific skills to be employed. Curriculum in the formal educational sector will focus on creativity and innovation. We will see the drawback of our lack of emphasis on training the young in critical thinking and creativity.

As cities grow, land-use policies have to be well studied and implemented. Unfortunately, projects will still be discontinued without proper evaluation when a new administration is elected.

Typhoons, flooding and earthquakes will require architects and engineers to design and build structures that can withstand calamities. Rainwater collection and roof gardens, intelligent garbage disposal will hopefully become common all over the city of the future.

Social sustainability-equity, social justice, poverty have to be addressed. Giving priority to expensive tollways and skyways that exclude the poor is unsustainable.