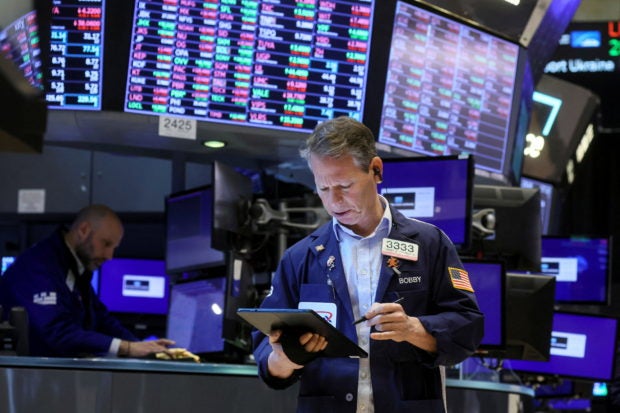 NEW YORK  – Wall Street resumed its slide on Thursday, ending in the red as inflation hit a four-decade high, cementing expectations that the U.S. Federal Reserve would hike key interest rates at the conclusion of next week’s monetary policy meeting to prevent the economy from overheating.

While all three major indexes ended in the red, they pared their losses late in the day and closed well above session lows, as the U.S. equities market followed its best day in months on Wednesday by renewing a multi-session sell-off.

“It’s more of the same,” said Paul Nolte, portfolio manager at Kingsview Asset Management in Chicago, noting that the equity market’s daily volatility is “being driven more by geopolitical than economic news.”

Consumer prices surged in February to a 7.9% annual growth rate, according to the Labor Department, the hottest reading in forty years.

“The (CPI) print was not far off estimates,” Nolte added. “There will be more to come in the next month or two as some of the rising commodity prices get incorporated.”

While the market fully expects the central bank to raise the Fed funds target rate by 25 basis points at the conclusion of next week’s monetary policy meeting, the CPI data suggested the FOMC could move “more aggressively” to curb inflation in the upcoming year, as promised by Fed Chair Jerome Powell last week.

“It’s still expected the Fed will raise rates four to seven times in the next year or two to curb economic growth,” Nolte said, adding that “what complicates this, is the Fed has never raised rates with the yield curve this flat and volatility so high.”

“They’re trying to increase rates at a time when the market is in turmoil.”

The graphic below shows annual core CPI growth, along with other indicators, and how far they have soared above the Fed’s average annual inflation target:

Energy prices were the main culprit, with gasoline prices surging 6.6% in a single month, although the report did not reflect the entirety of spiking crude prices in the wake of Russia’s actions in Ukraine.

Those actions kept geopolitical jitters at a full boil, with peace talks showing little progress even as a humanitarian crisis unfolds and world oil supply pressures continued to weigh on global markets.

Amazon.com provided one of the day’s bright spots, its shares jumping 5.4% after the e-commerce giant announced a 20-for-1 stock split and a $10 billion share buyback.

Six the 11 major sectors in the S&P 500 closed in negative territory with tech suffered the biggest percentage drop, while energy shares saw the largest gain.

The NYSE FANG+ index of market leading tech and tech-adjacent megacaps plunged on the day.

Declining issues outnumbered advancing ones on the NYSE by a 1.62-to-1 ratio; on Nasdaq, a 1.72-to-1 ratio favored decliners.

Volume on U.S. exchanges was 12.50 billion shares, compared with the 13.65 billion average over the last 20 trading days.