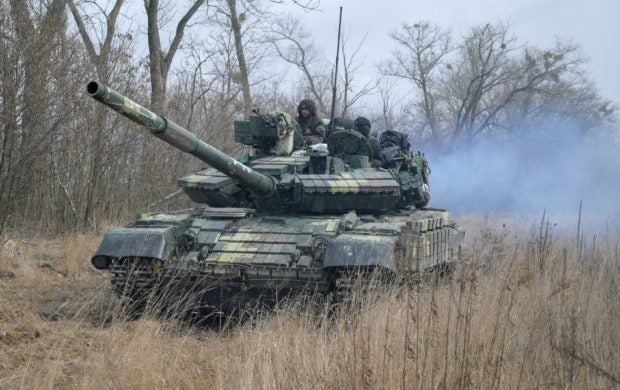 Service members of the Ukrainian armed forces are seen atop of a tank at their positions outside the settlement of Makariv, amid the Russian invasion of Ukraine, near Zhytomyr, Ukraine March 4, 2022. (REUTERS)

WASHINGTON  – The IMF warned on Saturday that the already “serious” global economic impacts of the war in Ukraine would be “all the more devastating” should the conflict escalate.

Even as forecasts remain subject to “extraordinary uncertainty, the economic consequences” of the invasion launched last week by Russia on its eastern European neighbor “are already very serious,” the IMF said in a statement.

A surge in energy and commodity prices, with a barrel of oil now close to $120, have piled on the inflationary hike that the world was already experiencing as economies recover from the Covid-19 pandemic.

“Should the conflict escalate, the economic damage would be all the more devastating,” the international lender said in a statement after a meeting Friday of its executive board on the economic impact of the war.

“Price shocks will have an impact worldwide, especially on poor households for whom food and fuel are a higher proportion of expenses.”

In Ukraine, “the economic damage is already substantial,” with infrastructure shut down, damaged or destroyed, with the country due to “face significant recovery and reconstruction costs.”

The IMF said emergency financial assistance requested by Ukraine, already reported on February 25, amounted to $1.4 billion, adding the request could be brought before the executive board as early as next week, according to the statement.

“The sanctions on Russia will also have a substantial impact on the global economy and financial markets, with significant spillovers to other countries,” the IMF said.

It noted “a sharp mark-down in asset prices as well as the ruble exchange rate” already, with the full scope of the “unprecedented” sanctions’ impact too early to call.

It said scarcity and supply disruptions could be particularly sharp for countries with close economic ties with Ukraine and Russia.

Moldova, which borders Ukraine to the southwest, has already asked for “augmentation and rephasing of its existing IMF-supported program to help meet the costs of the current crisis” and authorities are in talks with the IMF.

On the tenth day since Russia’s invasion of Ukraine, Russian forces have escalated their bombardment in multiple regions of the country, including Mariupol, surrounded by Russian troops.

Nearly 1.4 million people have fled the war, according to the United Nations, including to neighboring Moldova.