Dominguez: New, higher taxes for debt, pension payments up to next President 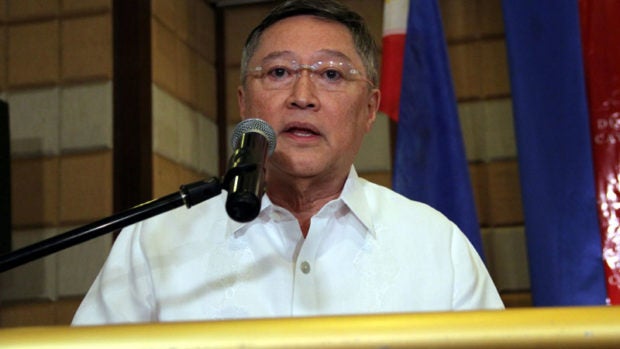 MANILA, Philippines—It will be up to the next President to impose new or raise taxes, based on fiscal consolidation plans to be pitched by the outgoing Duterte administration, to repay escalated debt and narrow record deficits wrought by the prolonged COVID pandemic, Finance Secretary Carlos Dominguez III said.

“Another important measure that has not been really seriously considered is the military and uniformed officers’ pension act,” Dominguez said at a gathering of members of Financial Executives Institute of the Philippines (Finex).

“That is very, very important for the stability of not only the budget of the country, but could also help by creating a military pension fund that could also boost the capital market in this country,” Dominguez said.

The Cabinet-level Development Budget Coordination Committee (DBCC) last year warned that “the inability to reform the current pension scheme for military and uniformed personnel” will be among the downside risks to fiscal consolidation or reducing the budget deficit to pre-pandemic levels.

The DBCC expects to have ended 2021 with its largest-ever full-year fiscal deficit of P1.61 trillion, equivalent to 8.2 percent of gross domestic product (GDP), as the government needed to spend more to fight COVID-19 while tax and non-tax revenues slowed due to pandemic-induced livelihood losses.

Military and uniformed personnel’s unfunded liabilities soared to P9.6 trillion in 2019 from only P5 trillion in 2016, the latest actuarial studies made by the Bureau of the Treasury (BTr) and the Government Service Insurance System (GSIS) had shown. Unfunded liabilities referred to the amount anticipated as future payouts for active personnel as well as current pensioners.

If unaddressed, GSIS estimates had shown that the current pension scheme will cost the government P850 billion yearly in the next two decades.

Popping these ballooning military and uniformed personnel’s pension, as well as the huge debt pile, will have to be among the priorities of the next administration, Dominguez said.

“We are just putting the final touches on our fiscal consolidation plan. At this point, I don’t have a complete package,” Dominguez said.

“But certainly, looking realistically at our situation, we have to pay for COVID-19 [borrowings] — we cannot just have COVID-19 and not pay for it,” he said.

In his presentation, Dominguez said the fiscal consolidation proposal “contains a combination of improvements to tax administration to plug existing leakages and updated tax policy proposals that build on our past reforms.”

“The scope of these reforms is comprehensive. Some features are also designed to future-proof our tax system,” Dominguez said.

Department of Finance (DOF) data had shown that the government borrowed a total of $25.7 billion from foreign lenders for pandemic response and recovery as of mid-January, including $2 billion to buy vaccines, boosters, and pediatric shots.

Dominguez said that in case the pending tax reform bills on capital market taxation and land valuation won’t pass in this current 18th Congress, they will be included in the fiscal consolidation pitch for the next administration’s consideration.

But Dominguez said he was against wealth tax, which he said will result in capital flight.

Last year, Dominguez warned the House of Representatives that the bill filed by militant legislators to tax the richest in terms of assets in the Philippines would not only push investors out of the country but also encourage tax avoidance through deposits in tax havens, like Cayman Islands.