Written By: Linda B. Bolido

For many Filipinos, particularly in the Visayas and Mindanao, there was very little reason to celebrate the Yuletide season in 2021.

The COVID-19 pandemic, which made it practically impossible to celebrate Christmas and New Year in 2020 anywhere in the Philippines, continued to rage in different variants. Then, just as Filipinos were starting to think they could at least have modest family reunions and get-togethers, Typhoon “Odette” (international name Rai) literally poured cold water on festivities in many parts of the Visayas and Mindanao. 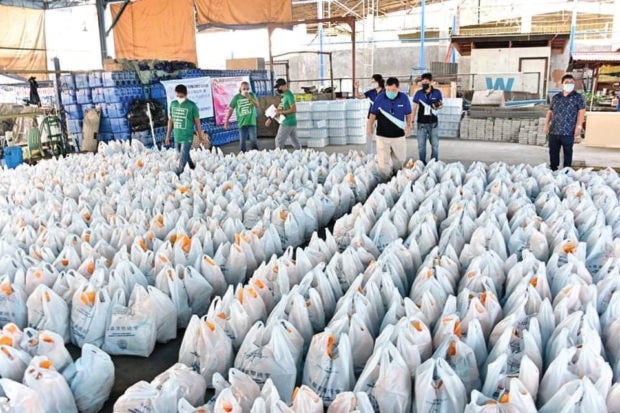 The 15th and strongest typhoon to hit the country last year, it first made landfall on Siargao Island in the province of Surigao in Mindanao, with winds at 160 kph. It would make nine landfalls, its strength only dropping slightly to 150 kph, before finally exiting through the West Philippine Sea from Roxas, Palawan.

Between December 16, the start of the nine-day Simbang Gabi or midnight Mass and the beginning of the Christmas season, and December 17, Typhoon “Odette’s” devastating effect resulted in 90 confirmed deaths, according to the National Disaster Risk Reduction and Management Council (NDRRMC). Losses to property and agriculture were conservatively placed at P2.69 billion.

Intervention and assistance from both the government and private sectors were obviously desperately needed.

With many Filipinos in dire circumstances once again, the Filipino Chinese Community Calamity Fund (FCCCF) – comprised of 11 major Filipino Chinese business, civic and cultural organizations – immediately and voluntarily stepped up to the plate, partnering with other groups similarly committed to easing the pain and suffering of Typhoon “Odette” victims. 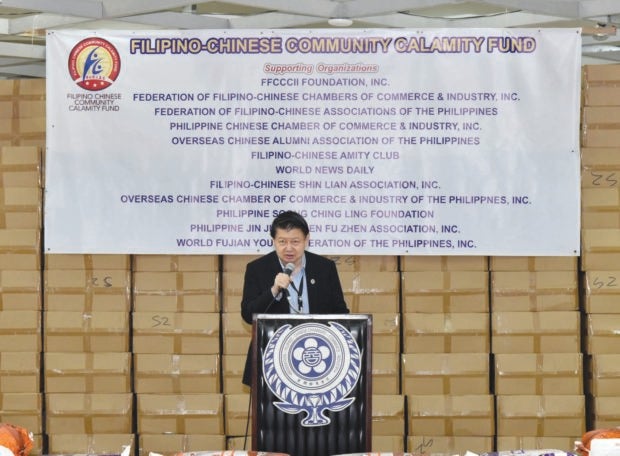 The donations were the latest in FCCCF’s efforts to help the victims of Typhoon “Odette”. Lim said, “Since [December], the Filipino Chinese Community Calamity Fund has raised more than P80 million, part of which was allocated for tens of thousands of relief packs to help the typhoon victims in [the] Visayas and Mindanao. While raising funds, we were already continuously distributing relief goods and food through our affiliate and partner organizations.”

Through FCCCF, the federation and other partners were able to extend much-needed and urgent assistance when and where needed.

In his speech in the simple turnover ceremonies at Kamuning Bakery Café in Quezon City, Lim said the federation commiserated with Typhoon “Odette’s” victims, who were hit by a natural calamity during what should have been a festive season. At the same time, he reminded them that Filipinos always believed habang may buhay, may pag-asa (as long as we are alive, there is always hope.) 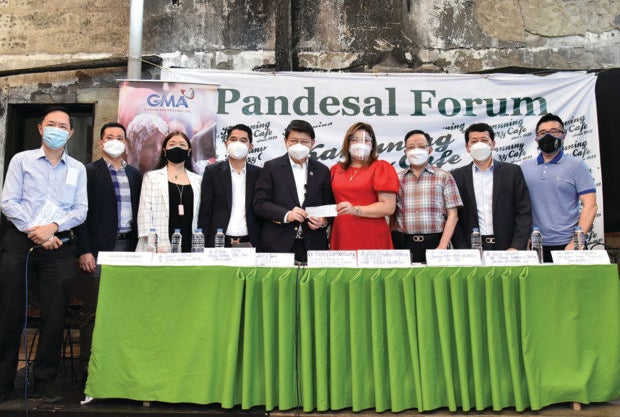 “The [GMA Kapuso Foundation] has been our partner in previous projects, such as in our FFCCCII school buildings donation to Marawi public schools as part of our ‘Operation Barrio Schools,’ and also last year’s relief efforts for Typhoon ‘Rolly’ victims in Catanduanes province.”

The school building donations were meant to replace structures destroyed during the protracted siege of what is known as the Islamic City of Marawi, the largest Muslim city in the predominantly Catholic Philippines. Fighting between government forces and fighters of Abu Sayyaf and Maute, both affiliated with the Islamic State of Iraq and the Levant (ISIL), also resulted in the burning of a Catholic church and left more than 1,000 dead while thousands had to flee the city.

The fighting left the historic city in ruins and the government estimates it will cost around $1.1 billion and take years to rebuild Marawi.

Typhoon “Rolly” (international name Goni), with winds of 220 kph, first made landfall in the island province of Catanduanes in 2020, which bore the brunt of its fury. The typhoon also affected other Bicol provinces and those in the country’s eastern seaboard.

He acknowledged the P8 million FCCCF received from the Chinese Embassy, through Ambassador Huang Xilian, “a true friend of the Philippines,” that paid for  20,000 relief packs for Typhoon “Odette” victims. 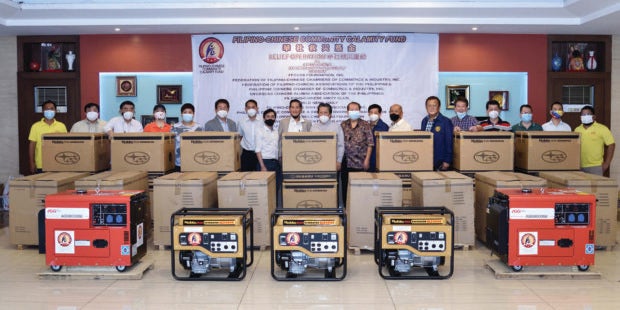 Even as the federation relief efforts were ongoing, Lim said their member chambers in typhoon-affected regions were continuously assessing the situation on the ground and coordinating with local governments so they could extend help to those most in need.

He pointed out that even during the holidays, FCCCF officers and volunteers in the provinces worked to be among the first to extend relief assistance to the typhoon victims. The Bayanihan spirit was very much alive and well, he said. Everyone showed compassion for fellow Filipinos and worked together to help their fellow citizens.

As FFCCCII’s relief efforts continued, he called on everyone to help Typhoon “Odette’s”  victims in any way they could. Although he asked everyone to help fellow Filipinos recover and overcome the challenges from the typhoon, the pandemic, and all other crises, Lim, an industrialist and philanthropist who got his Engineering degree from the University of the Philippines Diliman, and graduate business studies from Harvard University in Boston, Massachusetts, United States, also expressed confidence in the Philippines’ resilience.

“If we unite and work hard, we shall overcome. Our Philippine economy is resilient. And we have faith in a still better Philippine economy this 2022 despite the recent (COVID-19) surge due to Omicron and even with the Alert Level 3. Our Philippine economic recovery will continue this ‘Year of the Tiger’ with the start of the Chinese Lunar New Year on February 1, because the Philippines has positive macroeconomic and demographic fundamentals, due to good fiscal and monetary policies, the various socio-economic reforms, the nonstop infrastructure modernizations, the added stimulus of election spending, the start of the Regional Comprehensive Economic Partnership (RCEP) this year; and …our national unity and social harmony. We believe the Philippines shall become a Tiger Economy in this ‘Year of the Tiger,’” Lim said.

He urged everyone to work together and sustain the gains made in the Philippines’ drive towards public health and economic recovery. “Nothing is forever, no pandemic or crisis lasts forever.”

At the same time, he reminded everyone that COVID-19 is still out there so health protocols should still be observed – wearing masks, maintaining physical distancing and good hygiene, and getting vaccinated.

He said unity and cooperation are needed to help the Philippines recover from COVID-19 and Typhoon “Odette”. He also asked everyone not to give in to the so-called donor fatigue and to continue helping victims of disasters, the government, health front-liners, and everyone in need.