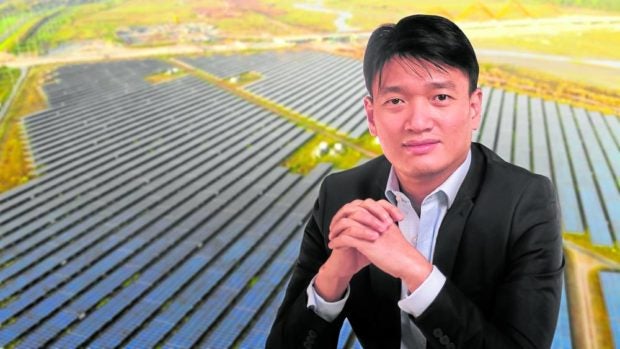 Citicore group, led by the same group that built construction and infrastructure firm Megawide Construction Corp., had seen the proverbial “writing on the wall” years ago. They knew it was only a matter of time that the world would shift to renewable energy (RE).

As the planet now races against time to curb greenhouse gas emissions that are causing climate change, Citicore has positioned itself to be part of the solution to address the biggest existentialist threat to humanity.

“We wanted to play an integral role in driving a new paradigm of power generation in the Philippines, from one of large fossil-fuel power grids to local microgrids using solar and energy storage systems. And with the ongoing transition from combustion engine to electric cars, we shall witness a radical change in the future of power in the Philippines,” Oliver Tan, president and CEO of Citicore Power and real estate investment trust Citicore Energy REIT Corp. (CREIT), says in an interview with Inquirer.

Through a mix of “brownfield” and “greenfield” projects (some of its solar plants were existing projects acquired from other developers while the others were built from scratch), Citicore was able to assemble a considerable portfolio of solar energy capacity in a few years, making it the fastest-growing solar operator in the country since taking this route in 2015.

In 2016, the first three solar farms were switched on: 60 megawatts in Cebu, 25 MW in Silay (Negros Occidental) and 18 MW in Bataan. The group accelerated with brownfield ventures in 2018, when it acquired five existing solar plants with a combined capacity of 60 MW—two in Tarlac, one in Clark, one in South Cotabato and one in Bulacan, bringing its total capacity to 163 MW to date.

With the Megawide group’s construction roots and eventual diversification to infrastructure businesses, this portfolio build-up was quite fast, but it wasn’t a walk in the park.

“The transition toward more sustainable avenues of power generation by the government was a complex process fraught with problems, but the steadfast hands of the DOE (Department of Energy) helped navigate the country through the early pains of the transition,” Tan says.

The fast-changing solar technologies, for instance, have been a double-edged sword.

“The fast evolution in solar technologies is both positive and negative: positive because it enables the rapid shift to renewable energy; negative because early entrants were trapped with the burden of a high capex (capital expenditure), making it difficult for them to compete with those who come in at a later stage. It’s good that Citicore Power was agile enough to calibrate its business model to weather these initial challenges we’ve encountered,” he explains.

In the next five years, Citicore’s plan is to build 1,500 MW of new solar capacity, 1,000 MW of which will be its attributable capacity. The largest in the pipeline is a solar farm in Arayat in Mexico, Pampanga, a 50-50 joint venture with AC Energy, with 72 MW in capacity for phase 1, which will be commissioned this February. Another 40 MW will be switched on by end-2022.

Once the Arayat project is commissioned, the Citicore group expects to become the biggest solar farm operator in the country.

Apart from generating RE, the space beneath the arrays of elevated solar panels is used to farm mainly high-value crops like turmeric, in partnership with farmers’ cooperatives. This “agro-solar” fusion addresses concerns that solar farms are displacing agricultural land.

Aside from proving that RE ventures and farming could co-exist, the “agro-solar” focus also aims to support sustainable crop production by empowering farmers in host communities and supporting rural development.

CREIT was formed primarily to own and invest in income-generating renewable energy real estate properties, primarily land and properties used by Citicore for harnessing solar power, that meet its investment criteria.

This REIT derives income primarily from lease rentals from its solar operator lessees structured as base and variable lease, while the lessees operate the solar plants to generate electricity and sell to government and private customer off-takers.

CREIT’s initial portfolio consists of a solar power plant with an installed capacity of 22.3 MW and other real properties leased to its REIT sponsor, Citicore Renewable Energy Corp. (CREC). Its lessees have a combined installed capacity of 123.7 MW. The leased properties have an appraised value of P10.9 billion, based on the valuation report of Cuervo Appraisers.

The first RE-themed REIT to come to market, CREIT is set to hold a P6.39-billion initial public offering (IPO) on Feb. 2 to 8 and list its shares on the Philippine Stock Exchange by Feb. 17. The offer price was finalized at P2.55 per share, for a projected dividend yield of 7 percent this year and 7.46 percent next year, assuming that it will meet income targets.

CREIT is offering 2.509 billion shares with an overallotment option of 327.27 million shares. The base offer consists of 1.047 primary shares and 1.134 billion secondary shares.

The pricing of P2.55 per share—slashed from the earlier maximum price of P3.15 per share—is meant to “provide more upside to the public investors who will be its long-term partners in the journey to net zero carbon future,” Tan says.

“At this price level, the sponsor has decided to increase its stake in the company post-IPO from 57.4 percent to 66 percent [assuming no overallotment portion will be exercised], by reducing the offer size … as the sponsor believes in the long-term value creation of the company,” he adds.

Proceeds from the primary offering will be used to acquire properties in Bulacan and South Cotabato while the REIT sponsors—Citicore Renewable Energy Corp. and Citicore Solar Tarlac 1 Inc.—can recycle at least P2.89 billion in proceeds from the secondary offer for new solar projects.

Why did the group decide to create a REIT instead of Citicore going public itself? Tan cites three reasons why the REIT structure is a better proposition.

“Second, CREIT being the first energy REIT to be listed in the country may pave the way for more listing of diversified REIT products to the benefit of the investing public and further develop our capital market.”

Lastly, this route is seen to allow the Citicore group to raise new capital to build more projects to help address the growing energy demand of the country.

The group believes this is an auspicious time to tap into “greening” capital market.

“It’s timely because of the growing (environment, social and governance) ESG-focused funds looking for alternative investment products; because after the five property REITs that were listed last year and the year before, CREIT provides a diversification to the available REIT products in the market; and lastly, this will open more investments toward building renewable energy to augment the thinning power supply reserves of the country.”