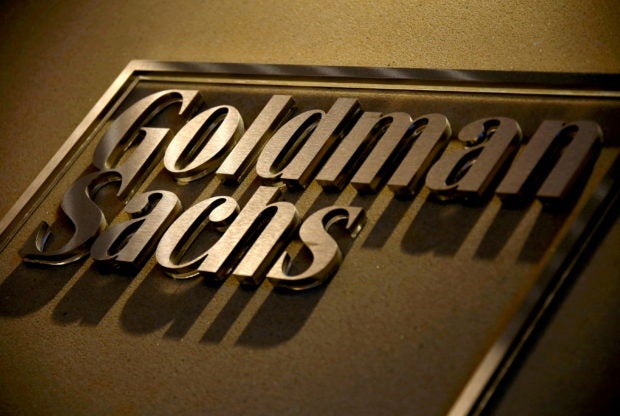 FILE PHOTO: A sign is displayed in the reception of Goldman Sachs in Sydney, Australia, May 18, 2016. REUTERS/David Gray

MANILA, Philippines—Investment banking giant Goldman Sachs expects the Philippine peso to underperform among regional currencies and weaken against the US dollar this year as imports flood the recovering economy and enlarge the current account deficit.

Goldman Sachs Economics Research in a Jan. 23 report said it was “most bearish” on the peso among emerging Asian market currencies despite the upgraded gross domestic product (GDP) growth forecast of 7.7 percent for 2022.

Goldman Sachs sees “strong economic rebound” in the Philippines this year following one of the longest and strictest COVID-19 lockdowns in the world, although this month’s Omicron surge and ensuing tighter restrictions were a downside risk to first-quarter growth.

“Over the course of the year, as the economy reopens, we expect the government to focus on its ‘Build, Build, Build’ infrastructure spending program, which slowed down during the pandemic from lower construction activity,” Goldman Sachs said.

“We think the current account will be the main driver of the foreign exchange market and thus we maintain our bearish outlook on the peso,” Goldman Sachs added, referring to the net stash of US dollars diminished by import payments.

Other banks and economic think tanks expect double-digit imports growth, and the wide trade-in-goods deficit owing to a slower increase in exports, to have been sustained in December 2021.

The government’s report in December and full-year 2021 foreign trade will be out on Thursday (Jan. 27).

On capital flows, Goldman Sachs said these “should be a moderate driver of the forex market” as its equity strategy team had “a neutral outlook on Philippine equities while foreign participation in the bond markets is limited.”

Asked at last Thursday’s GBED Talks press briefing if the peso may weaken to 52 against the US dollar in the near term from the current 51:$1 level, Diokno replied: “I do not speculate. The peso will remain market-driven.”

“The stability of the peso will be supported by structural inflows from exports, overseas Filipino remittances, BPO [business process outsourcing] receipts, and foreign direct investments (FDI),” he said.

“These inflows are seen to continue as the domestic economy recovers and external demand strengthens owing to the global economic recovery,” the BSP chief added.