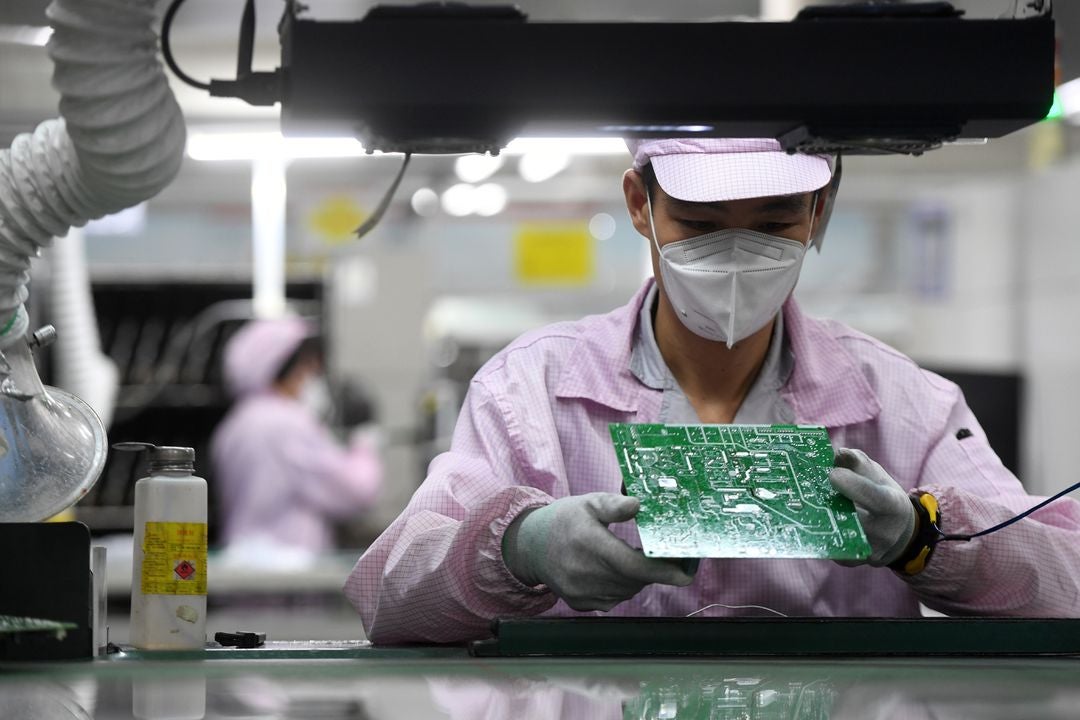 An employee inspects a circuit board on the controller production line at a Gree factory, following the coronavirus disease (COVID-19) outbreak in Wuhan, Hubei province, China August 16, 2021. China Daily via REUTERS

The rising rate of global infections have raised eyebrows among policymakers, with outbreaks in China forcing some firms to suspend production and threatening to disrupt output for memory chip giants like Samsung Electronics.

For now, however, the direct hit from Omicron on output appeared subdued, according to surveys released on Monday and Tuesday.

The findings from the private survey, which focuses more on small firms in coastal regions, tally with those in China’s official PMI that pointed to an uptick in factory activity.

Other parts of Asia also fared well with factory activity expanding in countries ranging from Vietnam, Malaysia and the Philippines.

“While the Omicron variant presents a key threat to the outlook, it is unlikely to cause nearly as much disruption to industry as Delta did in Q3,” he said.

“We expect Asia’s exports and capex upswing to be sustained by continued global recovery, and Asia’s manufacturing PMIs will remain moderately strong over the coming months,” analysts at Morgan Stanley wrote in a research note.

Some economists, however, warned that supply shortages and rising input costs remain risks particularly for export-reliant countries like South Korea.

“Given South Korea’s prominence in the automotive and electronics industries, substantial improvements in global supply chains will be required before we see a meaningful acceleration in manufacturing growth,” said Joe Hayes, senior economist at IHS Markit.

Japan’s PMI stood at 54.3 in December, remaining above the 50-mark threshold that indicates expansion in activity but lower than November’s 54.5 as new order growth softened.

India’s manufacturing activity continued to expand in December though at a slower pace than in November, as elevated price pressures remained a concern.

“The Omicron variant poses near-term growth risks by delaying the consumption recovery, but higher vaccination rates in Asia could help limit the damage to growth as compared to the Delta wave,” Morgan Stanley analysts said.