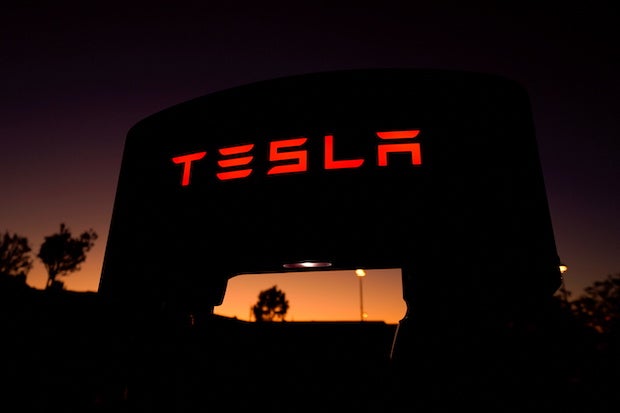 A Tesla supercharger is shown at a charging station in Santa Clarita, California, US on Oct. 2, 2019. (REUTERS/Mike Blake)

Tesla Inc’s shares started the year with stellar gains after the electric carmaker reported record deliveries for the fourth quarter, allaying fears of supply chain woes that have hit automakers.

Shares of the world’s most valuable carmaker were up 10% at a one-month high of $1,163.63 in early trading on Monday.

Analysts expect the strong delivery numbers to bolster 2022 expectations and see the pace of expansion of its new factories in Berlin and Texas to be larger determinants.

“We expect a gradual ramp of Berlin and Austin and anticipate those ramps will lead to a deceleration of exports from Shanghai, many of which have been bound for Europe in 2021,” Cowen analyst Jeffrey Osborne said.

The company, like others, faces component shortages, as a global logistic crunch and factory closures due to the pandemic limited supply. But Tesla managed to overcome much of the problems by reprogramming software to use less scarce chips.

Still, analysts said Tesla has a lot to watch out for in 2022 as competition heats up and several startup EV companies are scheduled to launch their first cars on the road. Legacy automakers such as Ford and General Motors also shift their focus to electric cars.

“We see 2022 being a more challenging year than 2021 was in light of increasing competition, and we believe the design of the four vehicles on the road are getting long in the tooth which likely decelerates growth,” Osborne said.