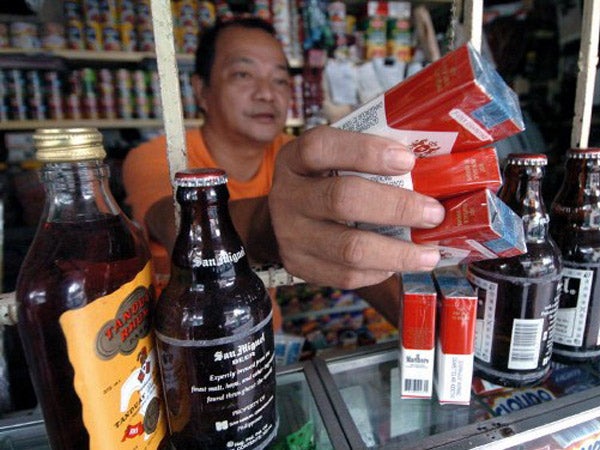 MANILA, Philippines — Another increase in “sin” taxes — which consumers ultimately pay for — greeted 2022, to not only discourage smoking and drinking which incur public and private health costs, but also to raise more revenues to finance the universal health care (UHC) program being implemented by the state-run Philippine Health Insurance Corp. (PhilHealth).

Effective Jan. 1, 2022, the excise tax slapped on cigarettes rose to P55 per pack from P50 a pack last year. This meant cigarette prices will rise by at least P5 per pack compared to last year’s. The annual rise in cigarette excise will be implemented until 2023 when the rate reaches P60 per pack, under Republic Act (RA) No. 11346 or the Tobacco Tax Law of 2019.

Under RA 11467, the excise tax rate on conventional freebase or classic nicotine vaping products increased to P55 per 10 milliliters (ml) this year, from P50 last year. The rate for nicotine salt vapes rose to P47 per ml from last year’s P42 per ml.

RA 11467 also jacked up the excise on distilled spirits — brandy, gin, rum, tequila, vodka, and whisky — to a specific tax of P52 per proof liter, from P47 in 2021, on top of the ad valorem tax equivalent to 22 percent of net retail price.

This year, fermented liquors like beer, lager beer, ale and porter were slapped with excise tax of P39 per liter, up from P37 in 2021.

The excise on wines, meanwhile, has been increasing by 6 percent yearly from the base of P50 per liter in 2020.

Budget documents had shown the government targeted to raise P172.3 billion from tobacco, plus P82.21 billion from alcoholic drinks, in 2021. Alongside this year’s excise tax hikes, revenues from cigarettes and e-cigarettes as well as alcohol had been projected to rise to P199.6 billion and P94.8 billion, respectively.

Despite the pandemic-induced recession in 2020, “sin” tax collections from cigarette and alcohol products rose to a total of P227.6 billion from P224.6 billion in 2019. Actual 2020 collections exceeded the conservative P201.5-billion target, as the most stringent lockdowns imposed at the onset of the COVID-19 pandemic dampened sales and limited distribution of “sin” products due to movement restrictions on non-essential goods plus some local government units’ (LGUs) drinking ban ordinances in line with curfews.

The projected increases in the “sin” tax-take last year and this year were also despite reports of flourishing illicit cigarette trade, including smuggling in at least four ports flagged by legislators in the Lower House as “hotspots,” as well as manufacturing of unregistered brands and products in some economic zones.

The latest estimates of domestic industry leader PMFTC Inc. had shown illicit cigarettes — cheaper smuggled or fake sticks as they had unpaid import duties, excise and other taxes — grew their market share to 8.6 percent in 2021 from about 5-5.5 percent in 2020.

It did not help that enforcement operations against unscrupulous cigarette traders lost steam amid prolonged COVID-19 restrictions.

The bureaus of Internal Revenue (BIR) and of Customs (BOC) have “strike teams” against illicit cigarette trade.

BIR estimates as of November 2021 had shown that the 2.5 million illicit cigarette packs it confiscated last year deprived the government of about P123.3 million in foregone tax revenues.

For its part, the BOC apprehended 102 illicit cigarette traders as of end-November 2021, which led to seizure of 38,827 master cases or P1.3-billion worth of illicit cigarettes. Foregone excise from these confiscated illegal tobacco products were estimated to reach P970.6 million.

Top officials of the Department of Finance (DOF), which oversees both the BIR and the BIR, had been warning that unscrupulous traders would take advantage of higher prices of tax-paid cigarettes by selling less expensive sticks, which slash government collections.

Revenues from the yearly “sin” tax hikes were to be spent on UHC implementation covering all Filipinos.

In October of last year, Finance Secretary Carlos Dominguez assured that the government will continue to finance and roll out the UHC program, enacted into law in 2019 before the prolonged COVID-19 pandemic put pressure on the government’s limited financial resources. Dominguez heads President Duterte’s economic team, and is in-charge of financing government programs and projects.

Since 2014, PhilHealth has been receiving the largest amount of subsidy among all government-owned and/or -controlled corporations (GOCCs).

The latest Bureau of the Treasury data showed that the national government extended P76.9 billion in subsidy to PhilHealth received as of end-November 2021, or nearly half of the P163.4 billion given away to GOCCs during the 11-month period.

But PhilHealth has been on the receiving end of criticism due to its failure to settle COVID-19 claims to hospitals, as well as other reports of alleged corruption and mismanaged public funds at the state-run corporation.

In November of last year, a report of the Washington-based think tank Center for Global Development (CGD) showed that despite “sin” taxes slapped in the Philippines and other countries, direct health costs and indirect economic losses due to consumption of these products remained sizable.

As such, CGD urged emerging markets like the Philippines, which needed to narrow budget deficits and repay debts which ballooned due to bigger war chests against COVID-19, to consider further jacking up tax rates slapped on cigarettes, alcohol as well as sugar-sweetened drinks.

The DOF was currently working on a “playbook” of strategies for fiscal consolidation — including possibly new or higher taxes — which the next administration may implement when it assumes office starting mid-2022, in order to sustain economic growth, generate more revenues, revert the budget deficit to pre-pandemic levels, and ease the debt burden.