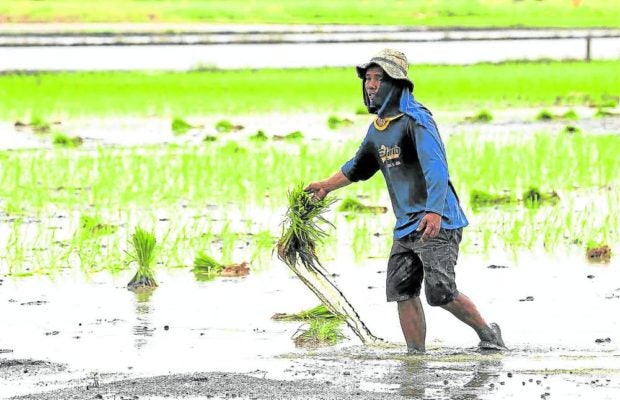 The average farm size in the country has shrunk to 1.29 hectares. —INQUIRER PHOTO

The country’s vital agriculture sector is not expected to grow by much due to factors such as shrinking farm size and declining productivity, according to state-run think tank Philippine Institute for Development Studies (PIDS).

The Philippine Statistics Authority last month said agriculture output contracted by 2.6 percent in the third quarter this year, mainly due to the decline in crops, livestock and fisheries production.

“Low growth in agriculture is ultimately traceable to the slow expansion in the factors of production as well as the weak growth in total factor productivity,” Roehlano Briones, a senior research fellow at PIDS, said in a paper.

Briones noted that the average farm size was down to 1.29 hectares by 2012. “Since the rural population has been growing, farm sizes have also been declining, hence, there is no room for growth in this factor,” he said.

Likewise, fragmentation of agriculture land prevented the realization of economies of scale, exacerbated by the Comprehensive Agrarian Reform Program (CARP).

Briones cited a study by Tasso Adamopoulos and Diego Restuccia published in the American Economic Journal (2020) that said this program reduced average farm size by 34 percent and agricultural productivity by 17 percent.

Briones said population growth, diminishing farm size and declining relative incomes in agriculture have incentivized the shift out of agriculture.

“The correlation between average daily basic pay and level of education tends to be stronger in industry and services than agriculture; it may well be the case that the long-term movement of workers out of agriculture represents the better educated trying to realize higher returns on human capital investment,” he said.

Briones said one way to spur the growth in agriculture was to raise the productivity of agricultural workers. INQ