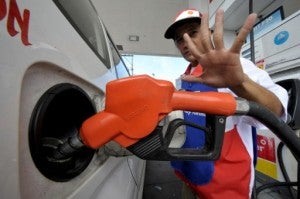 OIL PRICE HIKES An employee fills the tank of a car at a petrol station in Quezon City in this AFP file photo. Pilipinas Shell and Chevron Philippines announced on Monday, December 5, 2011, that they are jacking up prices of unleaded gasoline and regular gasoline effective Tuesday to reflect movements in world oil prices. AFP PHOTO/JAY DIRECTO

According to the Department of Energy’s price monitoring, the price of the regional benchmark Dubai crude dropped for the most part of last week, declining by an average of $3 a barrel in the week from November 28 to December 2.

Prices of gasoline and diesel based on the Mean of Platts Singapore benchmark for refined petroleum products likewise declined by $3.20 and $3.73 a barrel, respectively.

At around mid-week, however, news of sanctions on Iran over its nuclear program caused prices to slightly go up. This was tempered by the impact of the European debt crisis and slow manufacturing activity in China.

But the start of this week saw prices inch up again, prompting local oil firms to reflect these increases at the pump.