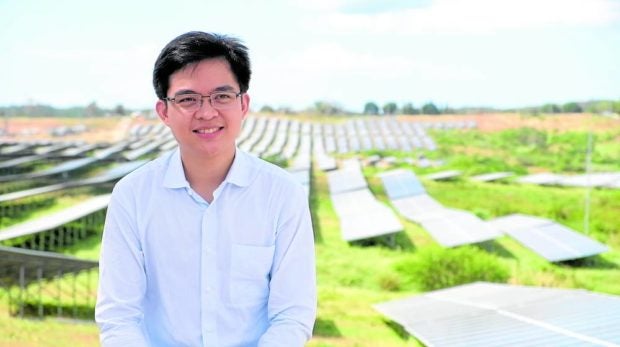 Leandro Leviste, 28, is the president and CEO of Solar Philippines, a company he founded in 2013. In this interview, he shares the strategy of Solar Philippines as well as Solar Philippines Nueva Ecija Corp. (SPNEC), developer of a 500-megawatt solar farm project that is planned to be the largest in Southeast Asia, and will list on the Philippine Stock Exchange this Dec. 17. This is the first time that a company has qualified to list under the renewable energy listing framework of the local bourse.

We believe we have contributed in lowering the cost, and so accelerating the adoption, of solar (energy) in the Philippines. Previously, solar companies focused on selling solar’s benefits to the environment, but we believe the three most important factors in power are cost, cost and cost. So we introduced the country’s first solar power purchase agreement to shopping malls at a discount to utility rates in 2014, then in 2017 signed the first power supply agreement with Manila Electric Co. (Meralco) at a starting rate of P2.9999 per kilowatt-hour, the lowest cost for any power plant in the Philippines. We made short-term sacrifices to deliver those low costs, but it proved the cost-competitiveness of solar energy and helped create demand.

Q2: You launched your initial public offering under a subsidiary, SPNEC, one of the many projects of Solar Philippines. How are you reimagining solar as a utility?

Electric utilities like Meralco and NGCP (National Grid Corporation of the Philippines) have a robust business model, because buying power wholesale then selling to consumers has significant economies of scale. We believe the disruption is ripest in power generation—almost 80 percent of the country’s power supply comes from fossil fuel that costs more than renewable energy. Over the past few years, the energy transition has been gaining momentum around the world, and we can see it now accelerating in the Philippines, where the utilities are responding to new costs, policies and consumer preferences, by procuring more renewable energy.

Q3: What are Solar Philippines and SPNEC doing distinctively that competitors cannot?

Since 2016, we have been betting on the development of large solar sites, consolidating land and securing right-of-way for transmission that would only be viable if there would be much more demand for solar. At the time, many thought this demand was still far away. But now, the demand is here, and it is already too late to start the development of large, cost-competitive sites. As such, we are turning our business model into partnering with the country’s power companies, helping them enter the solar market by making available to them our sites.

Q4: One of the key features of solar in many countries is the ability to guarantee the same rate for many years that electric utility companies are not capable of doing. How will this happen for the consumers? Why would investors welcome this?

Since electric utilities are now sourcing even more of their power from solar energy, we believe that consumers will enjoy the benefits of solar from even their consumption from the grid. This means that electricity costs will become less subject to fossil fuel prices than advances in solar and battery storage technology.

Q5: What is the legacy you want people to remember you and Solar Philippines for?We want to help the country’s power companies replace their future coal and gas developments with solar, so that together, we can make solar the largest source of energy in the Philippines. If we make this happen many years sooner than it otherwise would, we would be glad, even if they take the credit and we just play a supporting role. —contributed