December 7, 2021, Quezon City – The “Community Pantry sa New Manila” reopens at the Broadway Centrum where hundreds of beneficiaries, affected by the onslaught of the COVID-19 pandemic, received gift packages from employee-volunteers of Empire East. This initiative was made possible through a fund-raising raffle event where proceeds were used to buy staple food products for the traditional Noche Buena, bringing hope and joy to deprived families amidst the lingering health crisis. 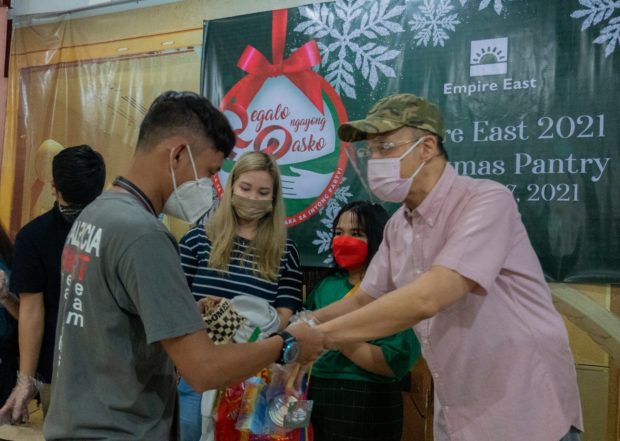 Tayo Tayo, which translates to “let’s stand together,” is a group of neighbors in New Manila who organized a community pantry inspired by Maginhawa and Quezon City. Since April this year, hundreds of beneficiaries have been queueing in the pantry for each day it operates, where they can get their share of rice, vegetables, canned goods, and other food products. What started to be an initiative of neighboring private individuals and families expanded into a larger effort, where various NGOs and private companies, and volunteers who are not residents from New Manila, extended their support.

Empire East has nearby condominium projects and a sales office in the location of the Community Pantry sa New Manila. For that reason, employees have been individually donating goods for the outreach project even during the first few months of its operation. This time, the company made a collective effort to help underprivileged families by sponsoring a gift-giving through a “Christmas Pantry.”

“I missed doing charity work like this. It always feels good to help other people who are in need,” shares Jason, an Empire East employee who volunteered at the Broadway Centrum. He also added that he participated in the company’s various corporate social responsibility (CSR) initiatives before the pandemic. So he is excited to take part in this activity once again.

Aside from its world-class residential communities in key cities of Metro Manila, Rizal, and Laguna, Empire East has been constantly lauded for its innovative CSR projects under the “Empire East Cares” arm. In addition, its employee-initiated pocket CSR programs reaching out to young students, displaced families, indigenous communities, and other disadvantaged sectors of society have been commended and recognized over the years.

Read Next
Local government of Carmona partners with SMDC to develop world-class township project
EDITORS' PICK
Metro Manila posts lowest temperature yet this ‘amihan’ season at 19°C
DOH: 28,471 new COVID-19 cases in PH; active cases now 284,458
Acer starts the year off strong with the Aspire Vero National Geographic Edition
Over 3 Million worth of prizes to be won at Smart Padala’s SENDali Manalo Promo!
Gear up and get ready to play with Yamaha Mio Gear
On Day 2 of implementation, gov’t says workers now exempt from ‘no vax, no ride’ policy
MOST READ
Derek Ramsay on being married to Ellen Adarna: ‘Gumaan ‘yung mundo ko’
Emma Stone calls Andrew Garfield a ‘jerk’ after he ‘lied’ about his ‘Spider-Man: No Way Home’ appearance
Lucky plants to grow in 2022
Retirements prompting major reshuffle in PH military
Don't miss out on the latest news and information.