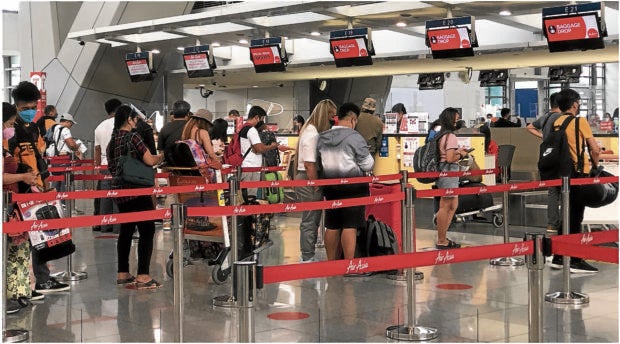 RARING TO RECOVER The tourism sector is optimistic the path to an industry rebound remains open. —contributed photo

Martin Reyes was looking forward to the second leg of a multi-island diving tour when the Omicron variant emerged in foreign shores thousands of kilometers away.

Like millions of Filipinos, Reyes had postponed travel plans since the early part of 2020, fearing he might catch and spread the deadly virus that has already claimed the lives of over 48,700 people in the country.

When Metro Manila was placed under the more relaxed alert level 2 last Nov. 5 after the sharp decline in new infections, he decided it was time.

He scheduled, with friends from Manila, for a diving trip in Puerto Galera, Mindoro, last Nov. 26. Bohol was next. It was a whirlwind itinerary designed to beat the Christmas rush.

“Even before, my strategy in travel was to avoid long weekends to avoid crowds,” Reyes, who works in the banking sector, told the Inquirer.

It was just before the Bohol flight when news of Omicron broke, triggering a wave of travel bans imposed on South Africa, where it was first detected, and nearby countries.

Omicron was immediately tagged by the World Health Organization as a variant of concern given its large number of mutations.

Reyes and his friends, however, pushed through with their trip.

“I was worried, of course. But then I noticed that the government was issuing travel bans right away unlike before with the Delta variant, where they waited,” he said.

“So maybe they learned lessons and also more Filipinos are now vaccinated. So there’s that level of comfort,” Reyes explained.

Safety nets like vaccination and the strict implementation of health protocols will spell the difference when it comes to controlling the spread of COVID-19 and ensuring that travel during the pandemic remains safe.

The airlines and the broader tourism sector have been reeling from the financial impact of one of the world’s harshest lockdowns.

With Omicron poised to test established safeguards once more, airline officials said they were motivated to ensure that flying was safe as they reopen more routes, catering to essential trips and the “revenge” traveler.

“Almost two years into the pandemic, AirAsia believes that our guests have already developed the culture of readiness and safety that is strictly observed across all touchpoints of the customer journey,” AirAsia Philippines spokesperson Steve Dailisan said as the carrier prepared to relaunch trips from Manila to Hong Kong.

“We will closely monitor the situation and will continue to abide by the guidelines set by the government,” he said.

As heath experts move to decipher the threat of Omicron, the industry is cautiously optimistic that the path to recovery remains open.

“The main difference is that Omicron emerged when almost 90 percent of NCR’s (National Capital Region) target population have been vaccinated and inoculation drives are ongoing at the provinces,” Carmina Romero, Cebu Pacific director for corporate communications, said in an email.

“There are now more fully vaccinated individuals, so the situation is different compared to six months ago,” she added.

Cielo Villaluna, Philippine Airlines spokesperson, told the Inquirer they were monitoring the situation closely and would ensure close collaboration with government agencies to minimize any inconvenience to flyers.

Since the start of the pandemic, the flag carrier has been fighting to keep crucial local and international flights operational.

For an industry obsessed with safety, airline officials noted that the risk of catching COVID-19 inside the aircraft was extremely low.

AirAsia Philippines pointed to studies suggesting “zero to none” virus transmission during flights. Moreover, planes are sanitized between trips and are equipped with special air filters capable of killing 99.9 percent of viruses.

Romero said Cebu Pacific recorded a 300-percent year-on-year increase during the All Saints’ Day and All Souls’ Day holidays in early November for flights serving destinations such as Boracay, Cebu, Davao and Bohol.

Earlier, AirAsia Philippines said it would increase weekly domestic trips by over 50 percent this December to meet strong demand.

PAL had also announced that flights were at 40 percent of prepandemic operations and it was poised to add more routes as conditions improve.

The recovery in international operations, however, continues to face headwinds due to Omicron.

Last Nov. 28, the Inter-Agency Task Force for the Management of Emerging Infectious Diseases imposed stricter facility-based quarantines for international arrivals, a move that could discourage trips to the Philippines.

Mhel Pangilinan, a Filipino cashier working in a convenience store chain in Honolulu, Hawaii, in the United States, told the Inquirer that facility quarantines were an added burden on top of the costly ticket price to fly home.

“It’s too expensive. My ticket alone costs P70,000 plus we have to pay for the quarantine hotel,” she told the Inquirer. “I’ll just wait until the pandemic situation settles down before flying.”

LOW RISK Airline officials say the chances of catching COVID-19 inside the aircraft are low given safety features. —CONTRIBUTED PHOTO

Challenged by the sharp reduction in flights and passengers, the country’s major carriers have taken other steps to soothe the usual concerns of flyers, including extending the travel fund validity and allowing penalty-free rebooking.

Another pain point was passenger refunds, which surged during the 2020 lockdowns. Romero said Cebu Pacific overhauled its refund process, allowing it to return about P8.2 billion in refunds to customers as of September this year.

The airline also cut the refund turnaround period to 60 days, she said.

The Omicron variant clouds the outlook for recovery moving into 2022, however, travelers like Reyes offer hope to the airlines that business can remain aloft.

Given his positive experience traveling during the “new normal,” Reyes said he was optimistic he would fly more regularly.

“Definitely not during the Christmas holidays, because of the crowd, but most likely after the festivities,” he said. “Of course, that depends also on the situation and if the cases remain low and they succeed in containing the Omicron variant.” INQ