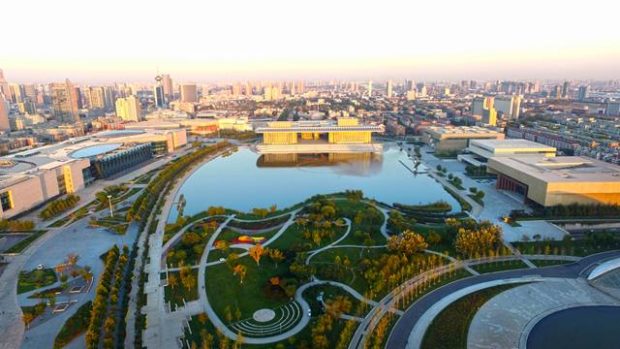 Last year, the average global temperature rose 1.2 degrees Celsius from pre-industrial levels, and experts predict that this decade will be the hottest on record.

If this trend persists, it will not only lead to higher sea levels, but also to more severe and frequent storms.

Mitigating this climate trend to avoid the tipping point of a 1.5-degree temperature rise will require a global, radical and rapid change in our economic consumption and industrial systems, particularly in developed countries, which have been responsible for historical emissions. Meanwhile, developing nations, who are most vulnerable to the impacts of climate change, will need to come up with adaptive strategies.

As a sequel to our article last month, we ask architect and environmental planner Mari Arias, and consultant to JLPD, to share her views on climate resiliency through water sensitive urban design, based on her post-graduate research. The topic is timely and coincides with the UN’s COP 26 Climate Change Summit.

Recovery and resilience have become a major concern given climate change and the more frequent occurrence of natural and man-made hazards. Damage caused by flooding can result in major setbacks in development which can last for several years.

Urban resilience has emerged as a major consideration in the planning and development of new cities and towns. Urban resilience is “the ability of an urban system… to maintain or rapidly return to desired functions in the face of a disturbance.” Cities are exposed to accumulated stresses and sudden shocks, which may result in social breakdown, physical collapse or economic deprivation. The need to ensure the ability of cities to adapt to change and to quickly transform its urban systems to ensure sufficient adaptive capacity comes into play in urban development.

Water in cities appear in many different forms, such as wastewater and greywater, drinking water, stormwater runoff which needs to be drained from hard surfaces to minimize flooding, natural water bodies and artificial features in the public sphere.

It is, however, notable how the built-up state of urban areas fails to acknowledge the natural water cycle: precipitation, infiltration, surface runoff and evaporation. Constant increase in population and built-up areas, especially in urbanized cities often leads to rise in impervious surfaces leaving less room for water to percolate back into the ground.

Water sensitive urban design (WSUD) weaves together water management, urban design and landscape planning in achieving sustainable and resilient stormwater management in cities. Its main goals are to protect water quality through filtration and retention methods; reduce stormwater runoff and peak flow through reduction of impervious surfaces, as well as local detention and retention measures; and integrate stormwater management in landscape design by use of multiple corridors, which contribute to visual and recreational amenity. 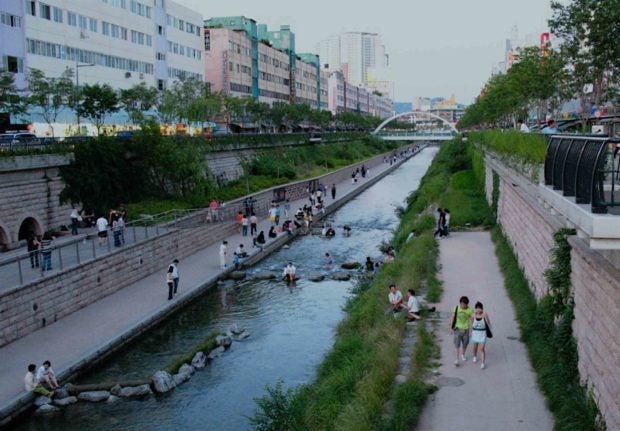 It also aims to consider the water cycle throughout the design and planning of these water management solutions to further improve local character, community and the quality of life.

The methodologies and strategies for WSUD are grouped based on their function: water use, treatment, detention and infiltration, conveyance, and evapotranspiration. These strategies aim to preserve water resources by recycling rainwater, groundwater recharge and facilitating reduction of flooding and stormwater runoff to downstream areas by means of increasing pervious surfaces where water can be stored temporarily, and eventually conveyed to drains and canals.

WSUD has been utilized as an emerging urban development approach for some Asian cities.

One notable example, is the Cheonggyecheon Stream in Seoul, South Korea—a restored 11-km stream in the middle of the city, which used to have a highway sitting atop of it. The project showed improvement of its recreational value by providing a publicly accessible amenity for residents and tourists. By utilizing the presence and the natural process of water, it helped in reducing heat island effect with the stream acting as a cooling mechanism facilitating thermal comfort while managing stormwater runoff.

A similar concept was adopted in the design of the Tianjin Cultural Park in China. Designed by Ramboll Studio Dreiseitl, the landscape concept for the 90-ha urban open space aims to provide stormwater mitigation strategies and increase outdoor comfort for pedestrians. The solutions include the creation of a system for rainwater collection through the 10-ha lake, which can accommodate a 100-year flood event. Retention trenches were provided within the park, allowing stormwater to be gradually fed onto the lake through cleansing biotopes that treat stormwater runoff.

The Philippines, for its part, has yet to fully integrate water sensitive urban design in the overall design of its cities. There are attempts to incorporate such concepts into plans and translate them into reality, but with the ever increasing price of real estate and the clamor for space within cities, public amenity and open space are often overlooked.

The recent storm surges happening in the country testify to how crucial stormwater management is in the overall function of cities. It is necessary to reassess how we plan and design our cities to ensure resilience and the continuous function of our urban systems.

The columnist is founder and principal of JLPD, a masterplanning and property development consultancy practice. Jlpdstudio.com

Read Next
Green design concepts for homes amid COVID-19
EDITORS' PICK
Villar Group gears up for AllValue Shopping Party on Dec. 3; around P 1-million promos and discounts up for grabs
Gov’t eyeing COVID-19 vaccine booster for essential workers, indigents by Dec. 10
Gov’t plans to open COVID-19 vaccination for 5- to 11-yr-olds by January 2022
A delightful blessing!
Legarda: Ending Violence Against Women, a cause for all
Omicron variant detected in more countries as scientists race to find answers
MOST READ
Quiboloy warns of ‘much worse than Omicron virus’ if his ‘persecution’ is not stopped
Suspected Omicron cases mild, says leading S. Africa doctor
Bongbong Marcos’ conviction in tax case not a crime involving moral turpitude — lawyer
Marcoleta defends pol ads on ABS-CBN
Don't miss out on the latest news and information.