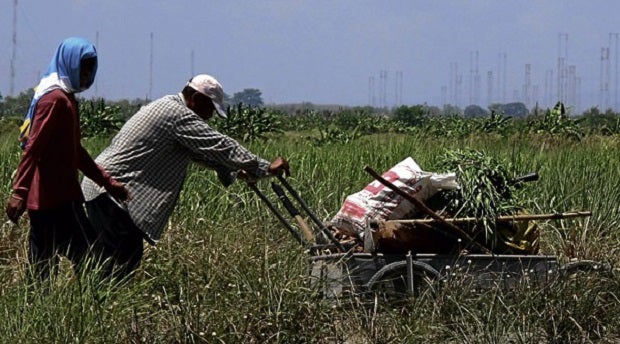 Agriculture, where Mindanao has a comparative advantage, is one sector that could benefit the most from the potential increase in investments, according to Moody’s. FILE PHOTO

MANILA, Philippines — The Department of Agriculture (DA) on Tuesday said it will try to seek additional funding from the Office of the President so that it may increase its fertilizer subsidy to rice farmers.

The call was made as farmers continue to hurt from the blistering rally in input costs that have made food production costlier, forcing farmers to scrimp on implements and make do with lower yields.

Along with the recent onslaught of Tropical Storm “Maring” and the skyrocketing fuel prices, consumers may feel the pang of higher food inflation in the coming months just as the holiday season draws near.

In a press briefing on Tuesday, Agriculture Undersecretary Ariel Cayanan said the prices of urea have gone up to an average of P1,718 per bag from P800 per bag.

“Usually we give farmers two bags of fertilizers for inbred farmers and three bags for hybrid farmers. Because of the high prices, these may be cut in half,” Cayanan said.

Under the DA’s program, a fertilizer voucher of P2,000 is given to farmers planting inbred seeds and P3,000 for those planting hybrid seeds.

Cayanan said the agency has decided to “spread thinner butter to the pan” to ensure that everyone will be given vouchers rather than focus on specific areas that may be given a higher cash aid.

Those who are eligible for a fertilizer subsidy are those who had previously been provided with free seeds under the agency’s rice programs. These are farmers who were in the DA’s farmers registry.

As of August, farmers were able to reimburse P2.6-billion worth of fertilizers. Regions with the highest rate of reimbursement were Cagayan Valley, Western Visayas, and Ilocos.

Ideally, the agency wants to secure an additional budget enough to allow inbred and hybrid rice farmers to buy two and three bags of fertilizers, respectively.

Due to budget constraints, however, Cayanan said the DA would take whatever it can get from the government’s coffers, noting that “everybody’s having a hard time” due to the high fuel prices.

The rising costs of fuel and fertilizer, both crucial in rice production, may likely put a dent in the DA’s rice production target this year of 20.4 million metric tons (MT).

For the first quarter, rice production hit a historic 4.63 million MT – the highest recorded during the period – although figures for the remaining quarters may not be as rosy after Maring destroyed P1.5-billion worth of rice crops.

Read Next
Say Mine to Your Dream Condo: Be a new home owner with SMDC’s virtual tour, live-selling events
EDITORS' PICK
Gear up and get ready to play with Yamaha Mio Gear
PH to import 60,000 tons of fish to cover shortage
#VotePH2022: COVID, power woes loom as poll concerns
Over 3 Million worth of prizes to be won at Smart Padala’s SENDali Manalo Promo!
Workers are exempted from ‘no vax, no ride’ policy – DOLE chief
Acer starts the year off strong with the Aspire Vero National Geographic Edition
MOST READ
Guevarra to Acosta: Obey rules on unvaccinated
Emma Stone calls Andrew Garfield a ‘jerk’ after he ‘lied’ about his ‘Spider-Man: No Way Home’ appearance
Cold-case investigation names surprise suspect in Anne Frank’s betrayal
Czech anti-vax singer dies after deliberate infection
Don't miss out on the latest news and information.