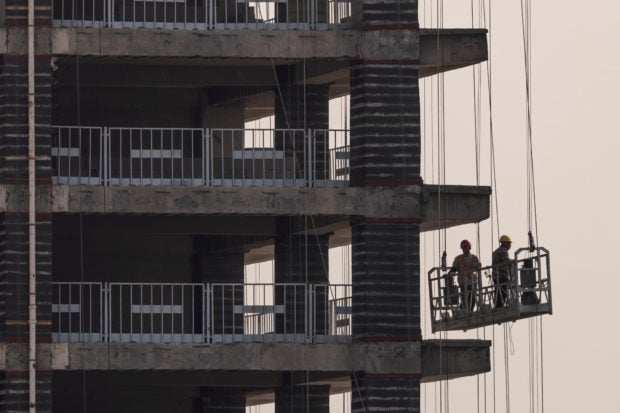 Men work at the construction site of a highrise building in Beijing, China, October 18, 2021. REUTERS/Thomas Peter

BEIJING — China’s September new construction starts slumped for a sixth straight month, the longest spate of monthly declines since 2015, as cash-strapped developers put a pause on projects in the wake of tighter regulations on borrowing.

New construction starts in September fell 13.54% from a year earlier, the third month of double-digit declines, according to Reuters calculations based on January-September data released by the National Bureau of Statistics on Monday.

That marks the longest downtrend since declines in March-August 2015, the last property malaise.

When the sector recovered in 2016 after authorities loosened their grip on purchases and development, tens of thousands of real estate firms borrowed heavily to build homes.

But as regulations tightened again this year, many of them have started to face a liquidity crunch, which was then worsened by sharply weaker demand due to tighter restrictions on speculative purchases.

Property sales by floor area dropped 15.8% in September, down for a third month, according to Reuters calculations based on the statistics bureau’s data.

The slowdown in the sector was also underscored by a 3.5% drop in property investments by developers in September, the first monthly decline since January-February last year at the height of the COVID-19 pandemic in China.

“Financing is hard, sales are tough, so of course, there has been no enthusiasm to build. For the first time in history, developers are encountering two blockages – blockages in sales and blockages in financing.”

The potential collapse of highly indebted real estate firms such as China Evergrande Group have raised concerns about systemic risks to the broader economy. The real estate sector accounts for a quarter of China’s gross domestic product.

Authorities will try to prevent problems at Evergrande from spreading to other real estate companies to avoid broader systemic risk, Yi Gang, governor of China’s central bank, said on Sunday.

On Friday, a central bank official said the spillover effect of Evergrande’s debt problems on the banking system was “controllable.”

“There is a likelihood that housing policies may loosen in the fourth quarter, and that would ease the pessimism in the property transaction data,” said Yan Yuejin, director of Shanghai-based E-house China Research and Development Institution.

In the first nine months, property investment rose 8.8% from a year earlier, slowing from 10.9% growth seen in January-August.