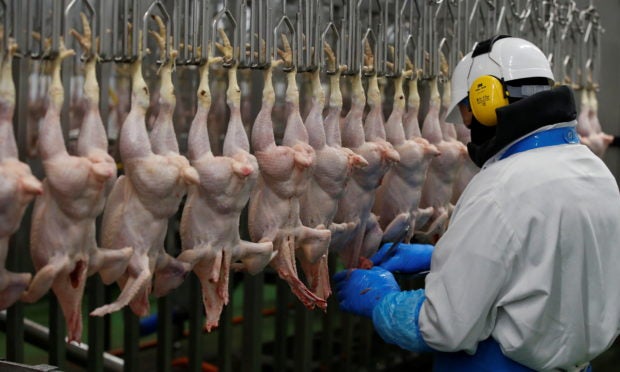 A worker processes chickens on the production line at the Soanes Poultry factory near Driffield, Britain, October 12, 2021. REUTERS

DRIFFIELD, England — When Nigel Upson checks the plucked chicken carcasses dangling from a rotating line at his poultry plant in England, he sees cash hemorrhaging out of his business from a collision of events that has distressed every part of the farm-to-fork supply chain.

Like food manufacturers across Britain, Upson was hit this year by an exodus of eastern European workers who, deterred by Brexit paperwork, left en masse when COVID restrictions lifted, compounding his already soaring cost of feed and fuel.

Such is the scale of the hit, he cut output by 10% and hiked wages by 11%, a rise that was immediately matched or bettered by neighboring employers in the northeast of England.

Increases in the cost of food will surely follow.

“We’re being hit from all sides,” Upson told Reuters in front of four vast, spotless sheds that house 33,000 chickens apiece. “It is, to use the phrase, a perfect storm. Something will have to give.”

The deepening problems at Upson’s Soanes Poultry plant in east Yorkshire are a microcosm of the pressures building on businesses across the world’s fifth largest economy as they emerge from COVID to confront the post-Brexit trade barriers erected with Europe.

In the broader food sector, operators have increased wages by as much as 30% in some cases just to retain staff, likely forcing an end to an economic model that led supermarkets such as Tesco to offer some of the lowest prices in Europe.

Following the departure of European workers who often did the jobs that British workers didn’t want, retailers may have to import more.

While all major economies have been hit by supply chain problems and a labour shortage after the pandemic, Britain’s tough new immigration rules have made it harder to recover, businesses say.

Already a driver shortage has led to a lack of fuel at gas stations and gaps on supermarket shelves, while chicken restaurant chain Nandos ran out of chicken.

The Bank of England is weighing up how much of a recent jump in inflation will prove long-lasting, requiring it to push up interest rates from their all-time low.

For the rural businesses situated near the flat, open fields of Yorkshire, Upson says the situation is dire.

Although he says he needs 138 workers for his plant, he recently had to operate with under 100. Staff turnover is high.

Richard Griffiths, head of the British Poultry Council, says that with Europeans making up about 60% of the sector, the industry has lost more than 15% of its staff.

When numbers are particularly tight Upson gets his sales, marketing and finance staff to don the long white coats and hairnets that are needed on the processing line.

“Three weeks ago the offices were empty, everyone was in the factory,” he said, of a business that supplies high-end birds for butchers, farm shops and restaurants. For the run-up to Christmas, he may look to students.

On difficult days Soanes can only deliver the absolute basics – chickens piled into boxes. They do not have time to truss the birds for retail or put them into separate, Soanes-labeled packaging that commands a higher selling price.

Around 3 tonnes of offal that is normally sold each week is going in the skip due to the lack of staff to process it.

The sudden rise in wages and the drop in output also come on top of spikes in the cost of animal feed, energy and fuel, carbon dioxide, cardboard and plastic packaging.

“We’ve just had to say to our customers, sorry, the price is going up,” Upson said, shaking his head. “We’re losing money, big style.” The poorest consumers would be hardest hit, he said.

Business owners have urged the government to temporarily ease visa rules while they do the staff training and automation of processes needed to help close Britain’s 20-year, 20% productivity gap with the United States, Germany and France.

But far from changing course, Prime Minister Boris Johnson says businesses need to cut their addiction to cheap foreign labour now, invest in technology and offer well-paid jobs to some of the 1.5 million unemployed people in Britain.

Upson says there is a shortage of workers in rural communities and with some 1.1 million job vacancies in the country, people can be choosy about which they pick. “Working in a chicken factory isn’t everybody’s idea of a career,” he said.

While 5,500 foreign poultry workers will be allowed to work in Britain before Christmas, and the UK will offer emergency visas to 800 foreign butchers to avoid a mass pig cull sparked by a shortage in abattoirs, the industry says it needs more.

As for automation, the production of whole birds is already highly mechanized, and while it could be used more for boneless meat and convenience cuts, the cost is prohibitive for a small operator.

The National Farmers’ Union and other food bodies said in a recent report that parts of the UK’s food and drink supply chain were “precariously close to market failure”, limiting the ability to invest in automation.

Soanes has an annual turnover of around 25 million pounds ($34 million). In the last three years its owners have spent 5 million on expansion. Now output must fit the size of the workforce.

“Food is too cheap,” he said. “In relative terms, a chicken today is cheaper to buy than it was 20 years ago. How can it be right that a whole chicken costs less than a pint of beer?”

Upson says he can get a higher price selling bones for pet food than he can for a leg of chicken.

For major producers, the main barrier to higher prices is often the purchasing power of the biggest supermarkets, which have since the 2008 financial crash battled to keep prices down for key items such as fruit, vegetables, bread, meat, fish and poultry.

Sentinel Management Consultants’ CEO David Sables, who coaches suppliers on how to negotiate with British supermarkets, said desperate food producers had already pushed through some price rises, and he expects another round to come in early next year.

With chicken a so-called “known value item”, of which shoppers instinctively know the cost, he said supermarkets would likely push the price rises on to other goods. He described the chicken sector as an “absolute horror show”.

One senior executive at a major supermarket group, who asked not to be named, said retailers were under pressure to “hold the line” on key prices, and that they all watch each other.

“If you see one of the big six move (on price), you can bet your damnedest others will take about 12 hours to follow,” he said.

Back in Yorkshire, Upson and others are praying they do. While he acknowledges Johnson’s desire to move to a “high-wage, high-skills” economy, he said not all jobs fit that bill.

“What skill do you need to put chicken in a box?” he asks. “We can put wages up, but prices will go up.” He is starting to despair. “Normally you can just be pragmatic and say, it will sort itself out. But I’m not sure where this one ends.”