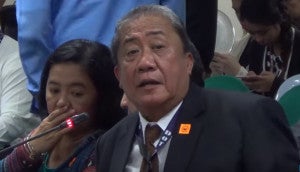 MANILA, Philippines—Transportation Secretary Arthur Tugade on Tuesday confirmed his family owned a personal overseas investment company that figured in a global data dump of millions of records aimed at unmasking the shadowy world of offshore money.

But Tugade, a successful businessman before joining the government, denied any wrongdoing and said the offshore assets have “consistently been disclosed” since he became a public official nearly a decade ago.

Details of Tugade’s overseas investments were published by the Philippine Center for Investigative Journalism (PCIJ) on Monday.

This was in collaboration with the International Consortium of Investigative Journalists, a non-profit organization that obtained and examined 11.9 million confidential records from companies that helped establish shell corporations and trusts in global tax havens.

The project, dubbed the Pandora Papers, revealed the secret assets of hundreds of billionaires and politicians, including world leaders, in over 90 countries,

According to the PCIJ report, Tugade and three children were directors of a British Virgin Island-based firm called Solart Holdings Ltd.

The report added that Solart Holdings was not listed as a business interest in Tugade’s Statement of Assets, Liabilities and Net Worth (SALN) filings since he became a public official in 2012.

Solart held assets worth $1.5 million (P76 million), according to the PCIJ report, which also pointed out that Tugade had disclosed P57 million in “offshore investments” in his SALN each year since 2012.

In his statement, Tugade said Solart Holdings was established in 2003 to grow “our financial portfolio like what any astute and judicious entrepreneurs would do to diversify their investments.”

“We decided to have a portion of our savings invested outside the Philippines, which is valid and legal,” he said, adding this was disclosed in SALN filings from 2012 to 2020 under “offshore Investments.”

Although the objective was to expand their financial assets, Tugade said the account “barely moved” in the past nine years.

The PCIJ said it had repeatedly requested an interview with Tugade since Sept. 15. In his statement, Tugade said he failed to respond due to an “administrative oversight.”

“I was not made aware of the interview request letter sent by the Philippine Center for Investigative Journalism. Had it reached my personal attention, I would have acted on the same swiftly,” he said.

Tugade, a law school classmate of President Duterte, is among the wealthiest cabinet members with a net worth of P311 million in 2019.

He is the founder of the Perry’s Group of Companies, a diversified enterprise with businesses in logistics, fuel distribution, trucking and food.

In its most recent financial filing in 2019, Perry’s Holdings Corp. booked a net income of P90.3 million, down 27 percent from the previous year.

The company recorded revenues of P2.2 billion that same year, which also dropped from P4.33 billion in 2018.

A corporate law expert, who previously worked with the government, found Tugade’s explanation satisfactory, adding, “I don’t think you can require everyone to fill the SALN up to the last centavo.”

“It depends on the style. Some in government like to detail each asset while others lump it together. Sometimes, even we get confused on what to include,” said the lawyer, who requested anonymity.

Tugade said Solart was established for investment purposes but the lawyer explained many wealthy individuals put up offshore vehicles later in their lives as part of their estate planning to pass assets on to their heirs.

However, offshore vehicles can become suspicious if it involves public officials with no other known source of income.

“If you do not have proof of where you got the money, then that’s a side that needs to be investigated,” the lawyer said.

Meanwhile, Tugade’s lawyers labeled the reports as an attack on the Cabinet official’s rumored political ambitions in the 2022 elections.

“We pray that whoever or whatever entity is behind this black propaganda, is not doing this because Secretary Art Tugade is now perceived as [a] legitimate threat, and a stumbling block to their political aspirations,” the lawyers said in a so-called open letter.

“There is no place for this kind of ill-conceived and preposterous narrative in our society just to damage a good and decent human being in the name of politics,” Tugade’s lawyers said.