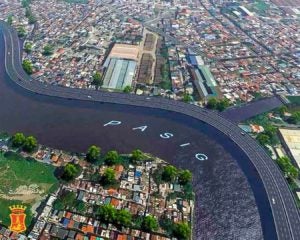 In a strongly-worded statement, Ang called the clamor to stop the PAREx an “orchestrated and continuing demolition job to paint the project as the opposite of what it truly is.”

He added that SMC was still finalizing the detailed engineering design. This is where the company will address “all valid concerns” on the planned 19.4-kilometer hybrid expressway, which will rise along the Pasig River banks in Metro Manila.

Protests against the project grew louder over the past week after the PAREx won the approval of key national government agencies.

Last Sept. 21, SMC sealed a supplemental toll operations agreement (STOA) with the Department of Transportation, Department of Public Works and Highways and Toll Regulatory Board (TRB).

Groups such as the Move As One Coalition, an advocate for safer and inclusive transport, said mega expressways such as PAREx were not the solution and it urged the government to invest more in protected bike lanes and mass public transportation.

Its members said the PAREx will also encourage the use of cars, eventually undoing the benefits of a new road, worsen pollution for nearby communities and destroy Pasig River’s cultural heritage.

Ang responded by calling the Pasig River “long dead.” Moreover, he noted that SMC’s ongoing clean up efforts will revive the river, which plays a crucial role in draining excess water from Laguna Lake into Manila Bay.

“There are those who only cry for the long-dead Pasig river to be ‘saved’ now—after being indifferent to it and our many other rivers that have suffered the same fate, for so many decades,” Ang said.

SMC is spending about P2 billion to rehabilitate the Pasig River and retrieve at least three million metric tons of solid waste, which hampers its ability to channel floodwaters.

The private sector is stepping in after the present administration appeared to have scaled back restoration efforts.

In November 2019, President Duterte ordered the abolition of the Pasig River Rehabilitation Commission (PRRC) and transferred its functions to other government agencies.

Saying the river could no longer be cleaned, Duterte said the money should instead be used to buy food and medicines.

Move As One co-convenor Robert Siy said abolishing the commission was a mistake.

“The PRRC was doing many good things. The river was coming back to life,” he told the Inquirer.

“To abolish PRRC was to admit defeat,” he said.

Ang said SMC, a food and drinks conglomerate which diversified into infrastructure over a decade ago, had the resources and engineering expertise to “take care of the river for the long-term.”

“It will be a great disservice to millions of Filipinos who will benefit from the multiple benefits of this project, if a vocal, passionate, but perhaps misinformed sectors of society, will be swayed to inaction or the status quo,” Ang said.

But advocates said the PAREx also creates other problems.

During a separate press conference on Wednesday, Move as One Coalition member and former Department of Finance undersecretary John Phillip Sevilla said he was not against urban expressways but he was opposed to PAREx.

“We are protesting PAREx because it will negatively affect the environment and it will destroy our few remnants of history,” he said in Filipino.

Sevilla said the project was not the solution to traffic, which costs the economy billions of pesos in daily losses, because it will encourage the use of cars instead of more sustainable transportation options.

He also revealed his shock the previous week upon learning the project was approved and the STOA was signed. He said the TRB told them last May that PAREx was still in the ““incipient” stage. TRB officials did not immediately respond to an Inquirer’s request for comment.

This would cost P14 billion and P76 billion, respectively, and would have far-reaching benefits for the majority of Filipinos in Metro Manila who do not own cars, he said during the media briefing.

In his statement, Ang said the PAREx would address the demand for other forms of transport.

“PAREx will also not be exclusive to vehicles. It will incorporate bicycle lanes and pedestrian areas, to provide a safer environment for people to use alternative ways of getting from one place to another,” he said.

He countered the assertion that PAREx will worsen road congestion.

“It is not expressways that induce people to buy more cars. It is poor or insufficient public transportation, pollution, and even personal progress of people,” he said.

“Through well-designed infrastructure, we will decongest our cities, make trips faster and more economical, and help reduce air pollution caused by hours of stand-still traffic all over Metro Manila—including in city or residential streets that motorists use as ‘short cut’ routes,” Ang added.

The six-lane expressway will provide a vital road link between Metro Manila’s east to the west corridor.

It will run from Radial Road 10 in Manila to C-6 Road or the South East Metro Manila Expressway in Taguig and will incorporate a bus rapid transit system.

SMC Infrastructure’s presentation for PAREx stated that the project will also have ramps in Buendia, Makati, Bonifacio Globe City, Pioneer and Mandaluyong. Once finished, it will cut driving time from Manila to Rizal to about 15 minutes.

One of the concerns raised was the actual size of PAREx since the Pasig River has an average width of 91 meters, according to the Water Environment Partnership in Asia, an initiative under the Ministry of Environment of Japan.

In the project documents, SMC Infrastructure said the expressway would be “built on top of the Pasig River” but “will not cover the entirety” of the waterway.

Because of new PAREx features such as bike lanes and a BRT, SMC should revise the project proposal and inform and consult the stakeholders involved, Siy said in separate statement.

He explained this was a requirement of the Department of Environment and Natural Resources before issuing the environmental compliance certificate (ECC), which is needed for the project to proceed.

Even with an ECC, Siy maintained he would oppose the project.

“A much better option would be to drop PAREx and to pursue river rehabilitation and beautification, plus the sustainable travel options,” he said.