The call for a sustainable shift in real estate is becoming increasingly relevant as the fight against climate change grows more urgent. Buildings, which account for a huge percentage of carbon dioxide emissions, play a major role in this transformation.

“Green” buildings have become an effective mitigation strategy in urban areas as they benefit both the environment and the economy. In the past few decades, global certifications and ratings like Leadership in Energy and Environmental Design (LEED) and Excellence in Design for Greater Efficiencies (EDGE) have been given to buildings that reduce their negative impact on the environment through their design, construction and operation.

Listed below are some of the most notable green buildings in the world. 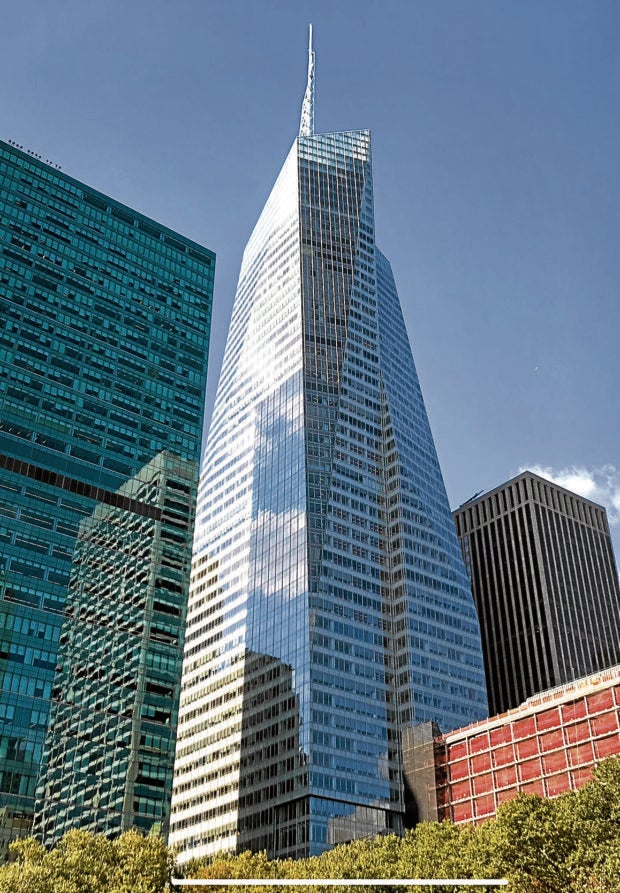 One Bryant Park, also known as the Bank of America Tower, is one of the most environmentally advanced skyscrapers in the world. It was the first high-rise building in North America to receive a LEED Platinum certification, the highest green building certification from LEED, after its completion in 2010.

The building employs an on-site 4.6-megawatt cogeneration plant, which provides about 65 percent of the building’s annual electricity requirements, significantly reducing the tower’s reliance on the city’s electrical grid. The tower also uses an ice storage system that produces ice at night to help cool down the building during daytime, while gray water is reused from the rain and snow that fall on the site. According to The Durst Organization, these strategies save about 7.7 million gallons of potable water annually.

The first convention center in the world to become LEED Platinum-certified, Vancouver Convention Centre boasts a unique design that makes it “simultaneously a building, an urban plaza, a park and an ecosystem.” It has also received a Green Building Excellence Award for Existing Building from the Canada Green Building Council.

Among the building’s most notable features is its six-acre living roof, the largest in Canada, which is home to more than 400,000 indigenous plants and 240,000 bees in four colonies that provide honey for the convention center’s restaurant. Visible throughout the city, it was designed to act as an insulator to reduce heat gains in warm months and heat losses in cooler months. In the building’s foundation, meanwhile, an artificial concrete reef was built in collaboration with marine biologists to restore the marine habitat of the natural shoreline.

The convention center also has its own black water treatment plant that recycles water and a seawater heating and cooling system that uses seawater to produce cooling or heating for the building.

Dubbed as the world’s greenest building by BREEAM, a British sustainability rating agency, The Edge prides itself on changing the real estate game by building an office that generates more energy than it consumes. The building’s orientation utilizes sunlight, with a glass facade that allows the entry of light without heating the inside. It is also equipped with solar panels that make use of the energy for the building’s heating and cooling installation and the laptops, smartphones and electric-powered vehicles used by the employees.

Employees in the building may also regulate the light and the “climate” of their workplace through a special app. The office’s 6,000 low-energy LEDs are connected to a daylight, temperature, infrared and motion detector that activate when necessary, saving a significant amount of energy. Located in the Zuidas business district in Amsterdam, The Edge was designed for global financial firm Deloitte, its main tenant.

Standing on 10 acres of land in Pune, India, is the Suzlon One Earth campus, the headquarters of multinational wind turbine manufacturer, Suzlon. A leading renewable energy solutions provider, it is hardly surprising that the company pledged to build the greenest office in India. The campus has a LEED Platinum certification as well as a Green Rating for Integrated Habitat Assessment (GRIHA) 5 Star certification, India’s own green building rating.

With its electricity produced on site—80 percent wind and 20 percent solar—and all other energy produced in the client’s windmill farms, the headquarters is considered a zero energy building, according MGS Architecture of India. It also reduces its operating cost through sustainable practices like rainwater harvesting and on-site waste conversion. The office maximizes the sunlight through an “Office in Garden” design that provides 75 percent of the work stations with daylight and outdoor views.