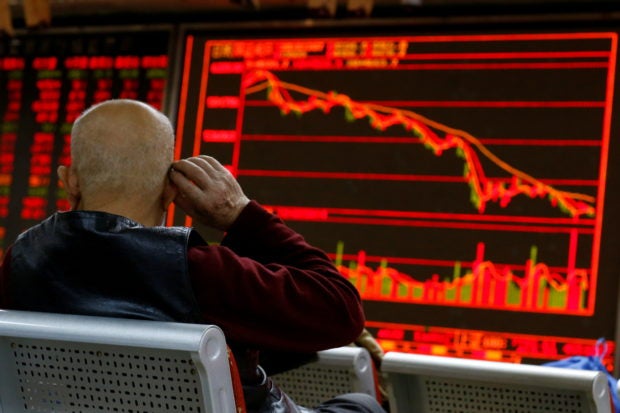 An investor sits in front of a board showing stock information at a brokerage office in Beijing, China, December 7, 2018. (REUTERS/File Photo)

SINGAPORE  – Stocks found support and U.S. futures lifted in relief on Wednesday after teetering developer China Evergrande said it would pay some bond interest due on Thursday, allaying fears of an imminent and messy collapse that had spooked investors.

The news also helped the risk-sensitive Australian dollar, though anticipation that the Federal Reserve may move a step closer to tapering later on Wednesday kept a lid on gains and the mood.

Markets in Taiwan and China reopened lower after a two-day break, catching up with a sharp sell-off around the world triggered by concern over Evergrande’s predicament, but were soon paring losses as the payment promise buoyed the mood.

S&P 500 futures reversed an early loss to trade slightly higher after Evergrande pledged to pay the scheduled coupon on a yuan bond that is due on Thursday. Safe-haven assets such as the yen and Treasuries also sold after the announcement.

Evergrande is still due to pay $83.5 million in interest on a separate dollar bond, but the signal that it has at least some ready cash for creditors seems to have cheered investors.

“That provides some reassurance,” said Ryan Felsman, senior economist at brokerage CommSec. “We may see certainly some improvement in terms of the volatility…it looks as though we’re going to see a little bit of a risk rally,” he said.

Globally, markets had also already started to calm down as analysts downplayed the threat of Evergrande’s troubles becoming a “Lehman moment” and setting off a financial crisis.

Overnight on Wall Street the S&P 500 fared little worse than flat, to sit about 4% below a record peak made early in the month. [.N]

Evergrande’s distress has already spread to other Chinese developers, but investors are now anticipating that the global fallout can be contained and concern is shifting to worrying but more gradual economic consequences.

“(The) Evergrande debacle is further stoking concern over the fallout from China’s broadening crackdown,” analysts at Rabobank said in a note to clients, pointing out new rules on everything from online gaming to developers debt levels.

“As a consequence, Evergrande can perhaps be seen not so much as a potential crisis trigger but rather a symptom of a broader policy shift which threatens Chinese growth as politics dominate economic considerations.”

In currency markets, the Australian dollar jumped 0.3% to $0.7253 after Evergrande’s news and the yen handed back small early gains on the euro and the dollar. [FRX/]

Most analysts think the Fed will not go into detail about its tapering plans but say risks lie in board members’ “dot plot” of rates projections.

“Even though a tapering announcement is not expected, the dot plot may deliver a hawkish surprise and require Powell to be dovish and push back in the press conference,” said National Australia Bank’s director of economics and markets Tapas Strickland.

The outcome of the Fed’s meeting is announced at 1800 GMT with a news conference half an hour later.