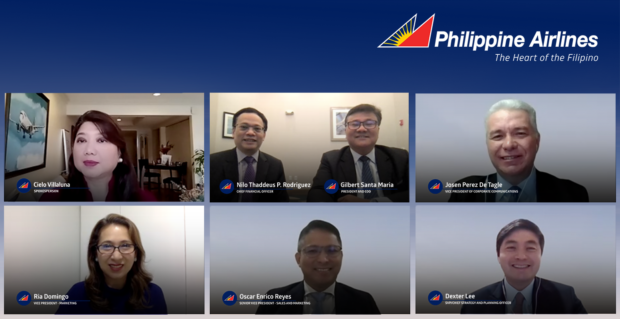 Screen grab of the online press briefing given by top PAL officials.

MANILA, Philippines—Philippine Airlines (PAL) president Gilbert Santa Maria said no further job cuts are being planned as the flag carrier bets on the return of passengers and steady growth in cargo flights that are deemed critical to its multi-year path to recovery.

Santa Maria said PAL would also exit Chapter 11 bankruptcy in the Untied States within the year after “intense” negotiations with creditors and lessors, the majority of whom eventually agreed to support its $2 billion debt restructuring.

Santa Maria gave the assurance to PAL’s workforce, which was reduced by 30 percent earlier this year, as the airline implements a new business plan to survive the global health crisis.

The PAL chief, who was in New York to oversee the early stages of the Chapter 11 process, said this view could change if the pandemic drastically worsened business conditions.

But he explained that PAL was preparing for the long haul even as the company expects pre-pandemic demand to return no sooner than 2024 or 2025.

With fresh capital, a leaner balance sheet and a smaller fleet of 70 aircraft from over 90 planes, Santa Maria said PAL wanted to fly to new destinations, including Tel Aviv in Israel, and revive more local routes.

He said PAL might also consider converting some of its aircraft to dedicated cargo freighters given strong demand for transpacific shipments of medical, automobile and electronic equipment.

“We are a traditional carrier. We are going to reinforce our core business, improve our brand and improve our marketing and recover that way,” Santa Maria said.

He added that PAL would steer clear of diversification that some of its competitors had pursued.

“We are not going to do an AirAsia and go buy a piece of Grab and turn ourselves into another Lazada or Shopee. That is not our strategy,” he added.

There were other financial reasons to do so, he explained.

As part of the $655 million in new capital being raised from owner Lucio Tan and other investors, Rodriguez said PAL needed $150 million to support operations after exiting Chapter 11.

The collateral backing this “exit facility” included PAL’s planes and its Mabuhay Miles program, he said.

“I think this would be the first or one of the very few rare occasions wherein a mileage loyalty program would be part of the collateral for this facility, available only upon emerging from Chapter 11,” Rodriguez said.

Based on the latest financial filing of parent firm PAL Holdings Inc., PAL’s Mabuhay Miles rewards were recorded as liabilities under deferred revenues. This amounted to P3.72 billion in the first semester of 2021, higher than P3.6 billion at the end of 2020.

Santa Maria said PAL was confident the Chapter 11 plea would prosper and PAL would exit before the end of this year, mainly because creditors holding 92 percent of debts gave their consent to the rehabilitation plan.

“The reason we did this prearranged, the reason that we took so much time to get ready for this was so that we wouldn’t have any creditor battles going into the Chapter 11 process,” Santa Maria said.

“These are battles with us but also battles among themselves trying to figure out how to slice the pie,” he said. “We did all of that ahead of time, we spent all that work, all that time, all the blood, sweat lots of tears getting to that point.”

“That business has kept us alive through the depths of the early pandemic,” Santa Maria said.