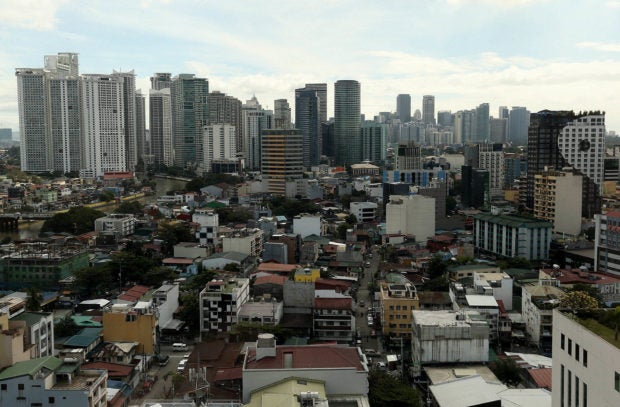 The skyline of Makati Business District in Makati City. The Philippine economy fell to its worst post-World War II recession in 2020 amid the COVID-19 pandemic, aggravated by the onslaught of natural disasters from the eruption of Taal Volcano to a string of devastating typhoons.
(File photo by RICHARD A. REYES / Philippine Daily Inquirer)

This is according to property consulting firm KMC Savills, which projected that about 1 million square meters (sq m) of Metro Manila’s grade A office space—equivalent to twice as large as the gross leasable footprint of SM North Edsa mall—would become vacant as new office stock would come in while demand was seen to remain sluggish.

This may jack up grade A office vacancy rate in the metropolis to nearly 20 percent by next year, which will be a record high, from more than 15 percent this year, KMC Savills said in its second quarter office property report. In the first semester, vacancy rate was placed at 13 percent.

In an interview with Inquirer on Tuesday, KMC Savills managing director Michael McCullough said this would exert a 15 to 20 percent downward pressure on rental rates, not even pricing in the short-term rent-free concessions offered by some landlords just to make them sign up for term renewals.

“Our conversations with our clients right now are: either the landlord gives me a deal I want or we work from home, or I go to another building or a cheaper location,” McCullough said, explaining the tenants’ sentiment.

While leasing activity has started to pick up, KMC Savills’ research noted that nonrenewals and pretermination of leases continued to dampen demand while the surplus of office stock had increased and was expected to continue rising through 2024. In the second quarter, building completions of previously-delayed projects delivered a fresh supply of 150,000 sq m of office space in the metropolis.

“We have observed a shift away from dense work areas to work-from-home or hub-and-spoke models all over the country. Without new tenants entering the market, there seems to be a supply-demand imbalance. This will keep leasing conditions in the occupiers’ favor in the short term, resulting in flight to quality and discounted premium space,” the research said.

The exodus of Philippine offshore gaming operators due to a combination of regulatory restrictions and lockdowns across borders, likewise resulted in more office vacancies.

It was only starting March this year, or one year into the pandemic, that office property landlords have been forced to offer generous rental concessions, McCullough noted. This was the time when the government started to reimpose tough lockdown protocols to curb the resurgence in COVID-19 cases and landlords realized that the market has “really shifted.”

When the pandemic erupted last year, many office landlords hardly offered concessions compared to shopping mall developers, when they saw a rising number of property deals being delayed, if not aborted.

“It’s not just demand destruction or demand delay. It’s also because the building next door just opened up, and it’s completely empty, and they’re offering cheaper rates. So their rates are starting to get really low now,” McCullough said.

In the Bay Area, for instance, he noted that there were buildings with rental rates that had gone down to a “shocking” P350 per square per month, from as high as P1,200/sqm monthly just 18 months ago.

In Makati, which has a number of old buildings, he noted it’s the first time for office vacancy rate to hit double-digit levels at 10.7 percent in second quarter from 8.2 percent in the first quarter.

On the other hand, Ortigas is nearing a vacancy rate of 20 percent and is trending toward 30 percent, he said.

BGC is a stable sub-market given its high quality occupiers, he said, except that the coming of new supply would still be an issue.