Surprise success is sweet for mother of two 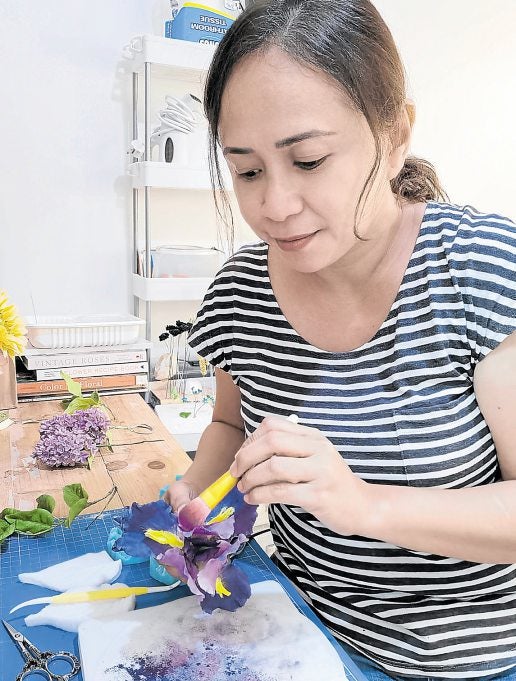 The wife of an overseas Filipino worker in Riyadh, Saudi Arabia, and mother of two has not only grown her cake decoration business but, without fanfare, has even won international awards for her creations, which are works of art in sugar.

Dimalanta’s deft hands have brought cake decoration to a whole new level, crafting sugar flowers that look so much like real blooms. Her artistry lets you have your cake and your favorite flowers, too, in one baked product.

Dimalanta did not set out on a specialty enterprise. “I used to just do baking as a hobby since I was a stay-at-home mom, taking care of the kids. I made my very first fondant cake on my son’s second birthday.”

That first cake was well-received and soon she was baking cakes for other family members for special occasions. “Eventually people started noticing my work and asked if I could make their cakes, too. This was when I started charging for my cakes and eventually accepted orders,” she said.

As she got more orders, she decided to parlay her hobby into a full-time baking business. Like most enterprises, she developed an online presence on Facebook. After a while, she went into a related enterprise —a baking supply store in Las Piñas City.

But she soon realized she enjoyed cake decorating more than baking. In particular, “I fell in love with crafting sugar flowers.”

Dimalanta says, “I realized it was less stressful than baking. Then people started noticing how my [sugar] flowers stood out from the rest, so I started selling them.” Eventually, she stopped baking and went full-time into selling “flowers” for other people’s cakes.

To hone her skills, Dimalanta attended cake decorating workshops and basic sugar flower-making classes. Practice, dedication and hard work enabled her to go beyond the basics.

As she became more skilled in the craft, she decided to open a workshop studio, right next to her store. “I started hosting cake decorating classes, inviting chefs and cake decorators to hold sessions in my studio. Eventually, I got the courage to [conduct my own] classes and teach sugar flower-making.”

Most of the people who buy the flowers she makes are fellow cake decorators who do not have time to craft sugar flowers for specially commissioned cakes. With the emergence of many new bakers and cake decorators because of the pandemic, Dimalanta says demand for her sugar flowers and online classes has “dramatically increased.”

Dimalanta says almost all her clients have a specific flower in mind, but sometimes they let her choose the colors or shades to use. Full bloom roses are priced at P250 to P280 each, depending on the color technique used. Peonies, being a bit more intricate, cost P500 to P600 each. Filler flowers, like cherry blossoms or hydrangea, are sold at P250 to P300 per bunch while foliage is sold at P150 to P180 per branch (about five to seven leaves). 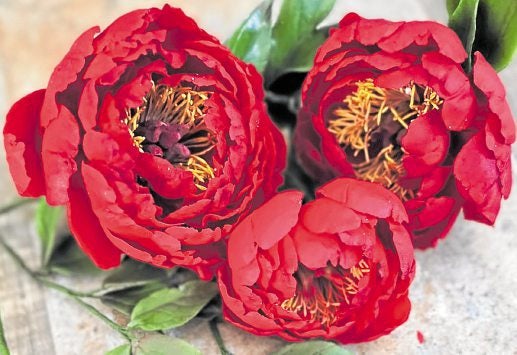 Orders have to made at least a week in advance since it takes time to craft each flower. The sugar flowers, Dimalanta says, can last for more than a year in a box, safe from humidity and moisture and stored properly.

Like other entrepreneurs, she was forced to make adjustments because of the pandemic. The baking supply store remains open but she almost closed down the workshop studio since in-person classes could not be held. But she could not bring herself to do so.

Now, she conducts online classes. “At first I was very scared and hesitant. I feared that no one would enroll, and I might not be able to execute all the techniques needed in making flowers. I was really surprised when many people responded to my [advertisement]. I started by teaching just one flower per module. I had to shoot it myself, and I didn’t even know how to do any editing so my first class was really badly edited.

“But I got so many good reviews and people started asking for more classes. I now conduct six online classes and I am happy to say that they have become a source of steady income. All classes are recorded and saved in a private FB page. People can sign up to access their desired module any time.”

Dimalanta’s creativity and skill are proven not just by the number of people eager to enroll in her online courses. In 2019, she placed first in the Sugar Flowers Category of the Cake Fiesta Manila competition.

Dimalanta says she joined her first competition “mainly to challenge myself into doing all these difficult flowers that I wanted to make, and also to be recognized for my craft.”

As the contest was held virtually and she did not have to fly to London, she decided she could not let the chance pass.

With her now solid FB presence, Dimalanta says her most popular class has about 90 students, each paying P2,500 for the class or module.

And she’s just getting started.