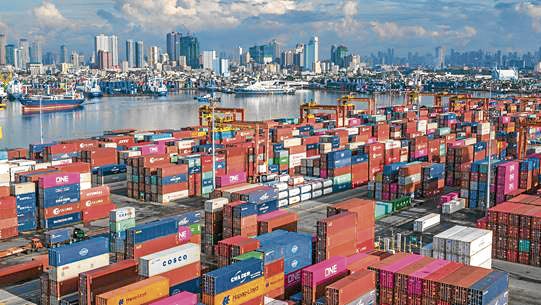 The Philippine Ports Authority (PPA) warns of “looming delays” in the shipment of goods such as online shopping products and raw materials for manufacturing as the contagious Delta variant shutters key transfer hubs in China—where most of the country’s imports are coming from. At the same time, the PPA said importers and exporters should brace themselves for the expected surge in shipments once the situation returned to normal to avoid congestion at the country’s cargo hubs.

“We’re giving everyone a heads up because some of our exporters and importers think it’s business as usual and processing at our ports is fast. Actually, that’s artificial and the reason is the lack of shipments from China,” PPA general manager Jay Santiago told the Inquirer on Wednesday.

He said more than 80 percent of the country’s imports came from Chinese transshipment hubs, where cargoes from around the world was consolidated before being sent to smaller markets such as the Philippines.

Over the past two weeks, the PPA said several transshipment ports in China had slowed down operations due to the global health crisis, straining alternative hubs. The situation worsened when the Ningbo Port, the world’s third-busiest container facility, had partially closed for a week after one Delta variant infection was detected. The PPA said Manila’s gateways run by billionaire Enrique Razon Jr.’s International Container Terminal Services Inc. (ICTSI) and Eusebio Tanco’s Asian Terminals were also operating “way below the threshold utilization set at 75 percent.”

“Anytime you have a major stoppage at the transshipment hubs and especially in China, where we source a lot of our imports, you can expect a surge a couple of weeks after they are back to normal. You prepare for this as best you can. The volume was coming anyway,” ICTSI executive vice president Christian Gonzalez told the Inquirer on Wednesday.

While ICTSI had plans in place, Gonzalez noted that previous disruptions in China had minimal impact on their operations because importers moved quickly to clear arriving goods.

Another problem, he said, was the build up of empty containers in the Philippines especially with the prolonged closure of major hubs such as Ningbo.

“That takes up capacity of trucks, outside depots and other resources and this eventually leads to us having to take up the slack,” Gonzalez explained.

“We have, of course, considered all of this and we always have plans in place to deal with this to a degree that we can make an impact but the real issue is whether the external empty storage facilities and the lines are making the same plans,” he added.

Santiago said a meeting was held on Wednesday among industry stakeholders who were encouraged to adjust operations to mitigate the impact arising from logistics disruptions in China.