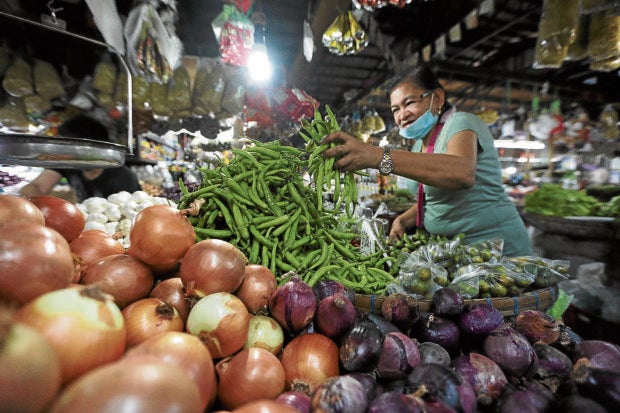 The projected shortage in fish, pork and vegetable supply should be addressed to keep prices stable especially amid the wet season and with La Niña threatening food production by year-end, state planning agency National Economic and Development Authority (Neda) said.

“While the outlook for some food items remains favorable, the supply forecast for other food products may fall short of demand. The government will work actively to support their availability and ease potential price pressures,” Neda said in its latest inflation report on Friday.

The Neda said the government was also ensuring an “unhampered supply chain” despite the revert of some areas, including Metro Manila, to stricter lockdown measures this month.

Citing estimates of the Department of Agriculture (DA) as of mid-July, Neda said pork supply would end 2021 with a 199,344-metric ton (MT) deficit, or 45 days’ worth of stocks, despite a 175.9-percent year-on-year jump in imports during the first half.

“Imports covered by the temporary increase in the MAV (minimum access volume) allocation and the reduced tariff rates began to arrive in July. Of the first-tranche target of 140,000 MT, 13.8 percent has been utilized. Nonetheless, supply needs to be further augmented with the arrival of more imports given the projected pork deficit by year-end,” Neda said.

The government slashed tariffs and increased quotas on pork to ramp up importation amid the local African swine fever (ASF) outbreak, but Neda said “the government will remain vigilant amid reports of new ASF cases in other countries” like Germany.

In July, meat inflation slowed year-on-year ,but remained high at 16 percent, mainly due to lower chicken prices as those of pork remained flat.

Besides a possible pork shortage, Neda said “lowland vegetable production and fisheries supply are also expected to undershoot at 1,267,804 MT and 135,135 MT, or only at 80 percent and 96 percent sufficiency level, respectively,” citing DA and Bureau of Fisheries and Aquatic Resources reports last month.

“To manage fish inflation and ensure stable supply, the DA will fast-track the issuance of the certificate of necessity to import (CNI) to cover the domestic demand gap during the closed fishing season starting October,” Neda said.

“While the availability of highland vegetables will partly offset the projected deficit in lowland vegetables, the government can proactively adopt measures to ease price pressures on vegetables and fish products,” it added.

Highland vegetables production was expected to post a surplus of 797,820 MT by year-end, while chicken supply would exceed demand by 41,928 MT, DA estimates showed.

Rice stock is also expected to surpass demand by 2.99 million MT by end-2021, as “the reduced tariffs under EO [Executive Order No.] 135 contributed to the arrival of 494,248 MT of rice imports in June and July, which is equivalent to about 30 percent of year-to-date arrivals,” Neda said.

Citing forecasts of state weather agency Philippine Atmospheric, Geophysical, and Astronomical Services Administration (Pagasa), Neda said a prolonged wet season due to La Niña was “likely to reemerge (likelihood of 55 percent) in September to November and may persist until the first quarter of 2022” after the ongoing El Niño.

Also, Neda said Pagasa forecasts had shown 9-12 typhoons might enter or develop in the country between August this year and January next year.