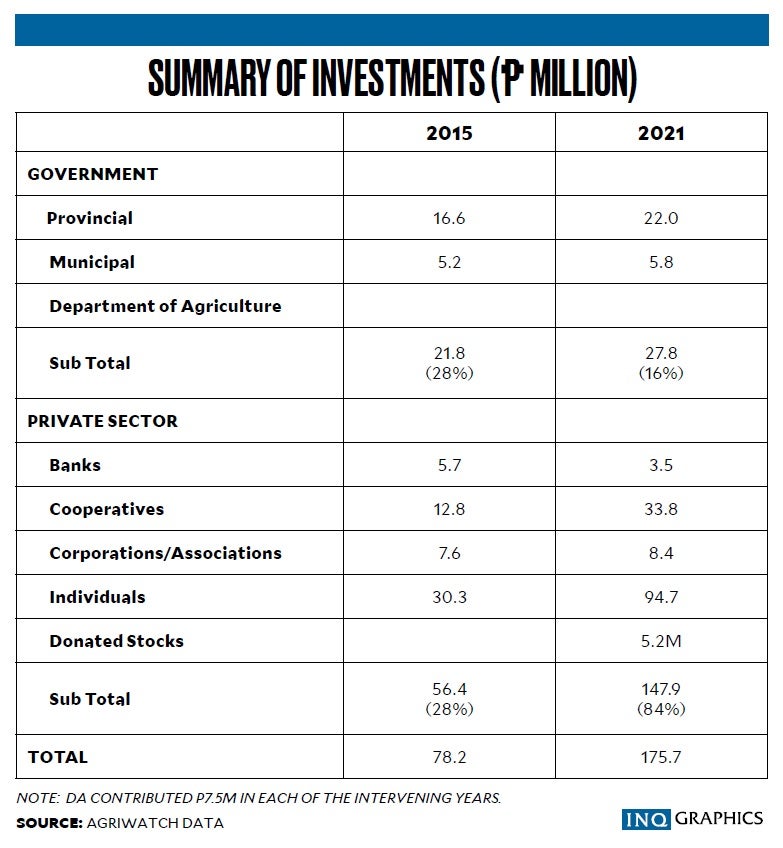 If the government does not catalyze the private sector with the necessary steps, our agriculture will remain in the doldrums. This is especially important today. Due to the Mandanas-Garcia ruling, local government units (LGUs) will get a 55-percent increase in their share of the Internal Revenue Allocation. They can now use part of this to multiply their help by mobilizing private sector contributions.

When the LGUs took over the responsibility for agriculture development from the Department of Agriculture (DA), they did not get the corresponding resources. They also did not obtain the necessary capability building for local agriculture planning and implementation. Consequently, when they took over the agriculture extension function from the DA, this service deteriorated. Hopefully, the DA leadership will not let this happen again. Instead, it can identify good models for replication by the LGUs with private sector mobilization. Innovative trading system

Last Aug. 10, at the weekly Tuesday forum of the Management Association of the Philippines–Agribusiness and Countryside Development (MAP-ABCD) Foundation, an example of this private sector contribution, with government support at the start, was discussed by general manager Gilbert Rumila of the Nueva Vizcaya Agricultural Terminal Inc. The project started in 2015 with the government having a 28-percent share in the investment. As of June this year, it was already down to 16 percent. During those six years, the government added only P6 million, while the private sector added P91.5 million. The government increased its share by 6 percent, but individuals and cooperatives increased their shares by 210 percent and 160 percent, respectively.

Nueva Vizcaya Agricultural Terminal Inc. is a 6.7-hectare facility that provides marketing channels for the agricultural products and services of Nueva Vizcaya and adjoining provinces. Previously, because there was no formal trading system, problems encountered included the very same problems faced by many provinces today. Examples are limited stalls for trading, high postharvest losses, of farmers and traders, and lack of reliable price information system.

The private sector needed government action to begin addressing this perennial problem. Then Gov. Rodolfo Agbayani allocated P20 million for this initiative, mainly used for a prefeasibility study. As the study showed promise, the partnership with the private sector began. The private sector soon took over the major role of implementing the solution. This is very different from many trading centers, where the government takes charge and failures occur. To learn more about this project, please phone GM Rumila (0917-3092445).Replication

The MAP-ABCD forum, where 12,000 interested parties are emailed weekly about effective technologies and good practices, continues the vision catalyzed by its deceased chair, Ramon Ilusorio. Supported by executive director Bernadette Yap, this vision is to be “a functioning source of information with a management perspective to contribute to agribusiness and countryside development towards poverty reduction.” Among its members are former Prime Minister Cesar Virata and former Agriculture Secretary Senen Bacani.

Already, there is a follow up to look at replicating this trading system model in other parts of the country. New forum participants Jim Cano, agritech director of 8Layer Technologies, and Jade Tulio, market information officer of Aramco, are meeting Rumilo and a governor to pursue the MAP-ABCD vision.

This follow-up action reflects the change in leadership from the older to the younger generation. While the previous MAP-ABCD board was composed of trustees over 60 years-old, today’s board has 40 percent of its members below 36 years old. It is this emphasis on the young now taking charge of helping replicate little-used effective technologies and practices with their more creative and innovative strategies.

Government action to catalyze private sector agriculture contribution is what we badly need today. The DA may likewise consider creating a special group of young professionals whose only responsibility is to look for technologies and good practices that can be replicated. This may be an important direction to take, given the Mandanas-Garcia recent ruling.

The author is Agriwatch chair, former Secretary of Presidential programs and projects and former undersecretary of DA and DTI. Contact is [email protected]

Note: DA contributed P7.5M in each of the intervening years.