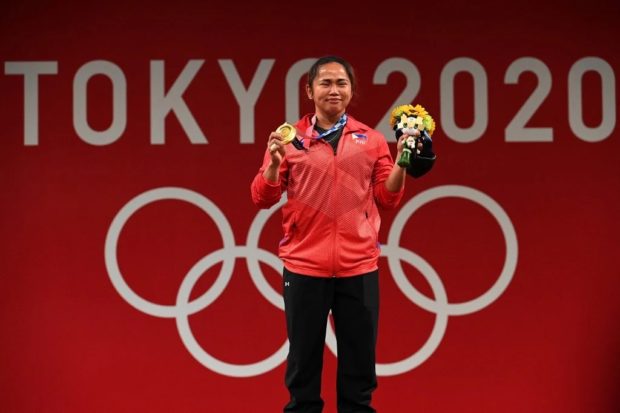 Gold medallist Hidilyn Diaz stand on the podium for the victory ceremony of the women’s 55kg weightlifting competition during the Tokyo 2020 Olympic Games at the Tokyo International Forum in Tokyo on July 26, 2021. (AFP)

It is just as well that the papers to prove her ownership are already being processed because Hidilyn Diaz, who bagged the Philippines’ first and only gold medal at the recently concluded 2020 Tokyo Olympics, is all set to move into her brand new P14-million condominium unit at the 47-story One Eastwood Avenue this week.

And the 30-year-old champion weightlifter has plenty of reasons to be excited about the move as the generous gift from Megaworld founder Andrew Tan comes with all the furniture, fixtures as well as appliances. Plus, prominently displayed in the two-bedroom unit’s living room is a commissioned charcoal painting of Diaz that captured that emotional moment when she realized she had won the gold medal. It also comes with a special message from Megaworld that says “Thank you for lifting our country up high.”

For that extra celebration, the Tans also left behind a bottle of the limited edition Emperador Gold in the kitchen to accompany their family celebration.

“She has brought so much pride to our country and she deserves all these rewards for her hard work in raising our flag so high in the Tokyo Olympics,” said Megaworld chief strategy officer Kevin Tan.

Diaz received the keys to her new unit as well as the warranty certificates for all the new appliances last Monday, during which she was toured by the younger Tan himself, and she was also particularly drawn by the wide range of amenities, including the spacious fitness area where she can store her own weightlifting equipment.

Since One Eastwood Avenue is within the self-contained Eastwood City township, it is also within easy reach of malls, supermarkets, retail stores and a church.

“It will be a very convenient lifestyle for Hidilyn and her family,” Tan promised.

Changes in the composition of the benchmark Philippine Stock Exchange Index (PSEi) are rarely met with frustration among investment experts. After all, the reshuffling of the measure containing 30 of country’s largest companies occurs regularly and is anticipated well in advance.

Yet, Biz Buzz sources said this was precisely the situation for a number of fund managers when the PSE announced last Aug. 5 that two new names would join the PSEi by Aug. 16, namely, AC Energy Corp. and “surprise” entrant Converge ICT Solutions.

This also meant they would need to remove two other companies: DMCI Holdings Inc. and Emperador Inc.

Naturally, AC Energy and Converge share prices flew while those of DMCI and especially Emperador dropped hard the day after the announcement.

So, what’s the big deal, one might ask? Circumstances change all the time and fortunes rise and fall depending on which way you bet.

As it turns out, several of these funds were expecting just one company—AC Energy, a “shoo-in” given its size and activity— to get in and not the unforeseen entrant, Converge.

The reason was the PSE’s longstanding one-year rule of being publicly listed before joining the PSEi—until this was apparently changed with an “early inclusion provision.”

Without prior knowledge of the provision, many were actually expecting Converge to join the PSEi in February 2022, which was comfortably after the first anniversary of its Oct. 26, 2020, initial public offering.

We asked around and learned that even Converge officials were surprised and there was some concern since its entry into the PSEi fell within the inauspicious “ghost month”.

Those worries were for naught and investors, especially foreign funds who invested in the company early on, were likely pleased with the roughly 12-percent share price gain since the announcement.

Questions have been addressed to the PSE regarding the early inclusion rule. We will be sure to update readers once we hear back.