Couple gives up jobs to cater to their sweet tooth 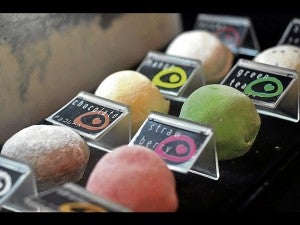 MOCHIKO might be for the more upscale customers when it comes to pricing, but it is only because Nowie and Odette only use premium ingredients.PHOTO BY FRANCIS T.J. OCHOA

It had always been their long-term plan to have their own business. And they feel they were just lucky to find one that they really love—something that catered to their sweet tooth.

“Odette was the one who started the business six years ago,” Nowie Potenciano, who worked as a regional brand manager for a multinational company, says of his wife.

“We really love to eat, especially desserts,” Odette says. “And while we were vacationing in Boracay back in 2005, we noticed that, at the time, there was no really good ice cream there.”

As self-confessed fans of Fruits in Ice Cream (FIC), the couple thought of distributing its goodness to the island of Boracay.

“We borrowed money from our relatives and used some of Nowie’s earnings to open a café,” Odette says. “We put it up instead of the usual scoop station dedicated to FIC in D’Mall in Boracay because we wanted the people to really enjoy while eating their ice cream.”

“We saw the potential of the business because ice cream is a happy business,” Nowie says. “I think ice cream is universally enjoyed by people. And it’s a good feeling when you see people love the product.”

Two years ago, as the trend of frozen desserts came to be, Nowie and Odette added Fling Frozen Yogurt to their dessert business.

“That was when I decided to help Odette full time in the business as we added more Fling stores in Tagaytay, Boracay, Marquee Mall and Subic—similar locations where we opened our ice cream shops,” Nowie says. 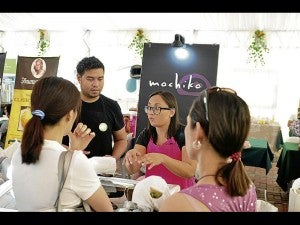 “We just come up with a schedule every month and try to visit our shops on a regular basis,” he adds.

And just in September of last year, they introduced their own brand of ice cream-filled mochi that they named Mochiko.

“We were introduced to mochi from our travels in Japan, Hong Kong and other countries,” Odette, who worked for various companies before, says.

Mochi is a traditional Japanese dessert made of glutinous rice with red bean paste inside, according to Nowie.

“What we did is we offered a modern twist to it and use ice cream instead of red bean paste,” he says.

Odette confessed that they got addicted to the unusual texture of the Mochi.

“We imagined infinite possibilities of flavor combinations we could do with them,” she says.

So as a natural extension of their dessert businesses, when a space beside their yogurt shop in Cliffhouse, Tagaytay, opened up, they grabbed the opportunity to open a shop dedicated to Mochiko.

Mochiko might be for the more upscale customers when it comes to pricing, but it is only because Nowie and Odette are very particular about the ingredients that they use and want their mochi to be consistently of higher quality.

“We only use the locally made premium ice cream from FIC that has a lot of real milk and never the mass-market ones despite the cost savings these present,” Nowie says.

Today, Mochiko is available in Tagaytay and, from Friday night to Sunday afternoon, in Mercato Centrale and Midnight Mercato at Bonifacio Global City.

“These are great venues to reach foodies who are always willing to try something new and unique,” Nowie says. 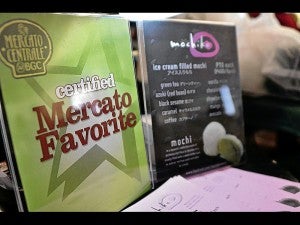 The couple shared they are also planning to put up more retail outlets to make Mochiko available in more locations but they intend to run all of these themselves because “we are very particular about the execution and the customer experience.”

This attitude of the couple has paid off because “customer feedback has been overwhelmingly positive,” Odette says. “We run out of stock many times because many people want to try out Mochiko and those who have tried them come back for more.”

“We have more limited flavors planned so there’s always something to look forward,” Nowie says. “[This month], we should have a new one so we encourage people to like us on Facebook because that’s where we make the announcements.”

The most important lesson Nowie and Odette learned from their series of dessert businesses is to continue innovating and moving forward.

“You can’t expect to have different results by doing the same thing,” Odette says. “So if you want things to improve, whether in life or in business, you have to change what you’re doing now.”

The couple also proved the importance of going into the business you really love doing.

“If you really love what you’re doing, you’ll be able to slog through the difficult times,” Nowie says.