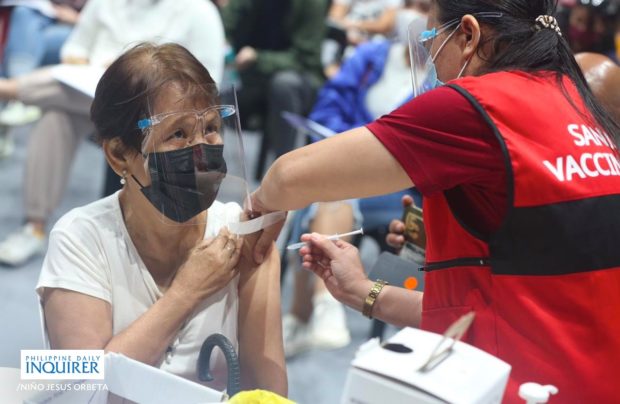 In a statement, the Department of Finance (DOF) quoted Victoria Kwakwa, regional vice president of World Bank for East Asia and the Pacific, as telling Finance Secretary Carlos Dominguez III during a recent meeting that “I think you are in a good place with your vaccination program and I hope it continues.”

The DOF said Kwakwa told Dominguez that the Washington-based multilateral lender hoped that “the pace of the Philippines’ vaccination rollout continues to enable it to achieve its target of immunizing 100 percent of its adult population this year.”

The DOF added that Kwakwa “expressed concern that with the deadlier COVID-19 Delta variant spreading across the globe, other countries in Asia may experience surges as they have either been late in procuring the vaccines or are slow in vaccinating their citizens.”

In this regard, Dominguez assured Kwakwa that mass inoculation was picking up, with 25 million doses administered during the second quarter of 2021, compared to only less than three million doses in the first quarter.

Dominguez also told Kwakwa that the Philippines will receive delivery of 70 million doses during the third quarter, plus 50 million in the fourth quarter.

The Finance chief said the vaccines arriving within the year would be “enough to inoculate more than 100 percent of the country’s population,” adding that “the Philippines has been fast and efficient in vaccinating its citizens.”

But Moody’s Analytics chief Asia-Pacific economist Steven Cochrane in a commentary Monday said the Philippines, Indonesia and Thailand were “struggling to acquire a sufficient number of doses” for these countries to achieve herd immunity, or have about three-fourths of their respective populations vaccinated.

As such, Cochrane said reaching herd resilience would extend up to 2023 for these three countries, unlike most of their neighbors, which were expected to do so by next year.

It did not help that in the Philippines and India, “seeming outsize gains this year are skewed upward by their very deep recessions in 2020,” Cochrane said. Both countries were expected to revert to economic growth this year, but mainly because their economies slid the worst in the region last year.

The Philippines’ gross domestic product (GDP) shrank by a record 9.6 percent in 2020 due to the longest and most stringent COVID-19 quarantine in the region spilling over up to now. The economic team targeted GDP to grow by 6 to 7 percent this year, including a double-digit or more than 10-percent year-on-year jump in the second quarter owing to last year’s trough when 75 percent of the economy stopped at the onset of the pandemic.

Cochrane added that for the Philippines and India, “downside risks are considerable for both countries in this year’s second half and into 2022.”

“Both have suffered lengthy economic shutdowns, accompanied by only modest fiscal support provided to SMEs (small and medium enterprises) and low-income households, that could lead to very deep and lasting scarring as they struggle to reopen businesses, pay back loans, or find employment as the economy finally recovers,” Cochrane said.

According to the Asian Development Bank’s COVID-19 policy database, the Philippines’ war chest to fight the prolonged pandemic amounted to $30.45 billion as of June 28, equivalent to 8.62 percent of 2019 GDP. INQ